We've never been to South Carolina, but we'll definitely get there sometime in the next 7 years. (We're taking Trevor to all 50 states before he's 18.) In the meantime, we had a great time learning all about South Carolina through Little Passports! 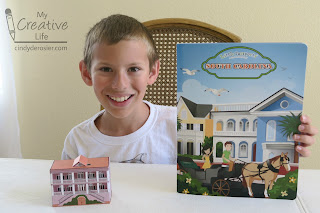 After building a model of a house from Rainbow Row, we did an activity about tablesettings. The inspiration is Charleston's nickname, the City of Manners. That sounds like a nice place to visit! Trevor breezed through the activity, since he has years of experience entering tablesetting contests and spotted the mistakes immediately.

Next, we learned about South Carolina's state dance, the Carolina shag. We decoded the answer after using the map to find the names of coastal towns. We read about Congaree National Park, home to bald cypress, sweet gum, and loblolly pine trees that grow in swampy areas and survive flooding. We looked for hidden pictures in an illustration of the CSS H. L. Hunley, the world's first submarine to sink an enemy ship (during the Civil War, in 1864). The Hunley sunk soon after and was buried in silt for almost 130 years.

Not surprisingly, the South Carolina State Journal has other activities about the Civil War. We learned about the locations of some of the major battles, including Ft. Sumter, where the war began. Trevor unscrambled hidden letters to learn where the Confederate forces signed a peace agreement to end the war. Continuing with the Civil War theme, we read about an early system of communication called wig-wag. Before radio was invented, signalmen would climb towers to wave flags to send messages. Trevor used the Alaska flag (his souvenir from our visit last summer) to send me some messages. Decoding them wasn't easy at first, but I got faster as time went on. And he got more silly with his messages! 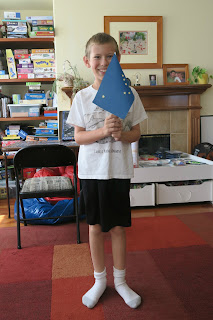 During the Civil War, soldiers would write letters to loved ones using quills and homemade ink. Trevor mashed some ripe strawberries to make a red ink. 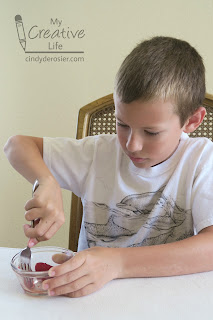 We used scissors to snip the end of feathers and dipped them in the juice to write. It worked really well! 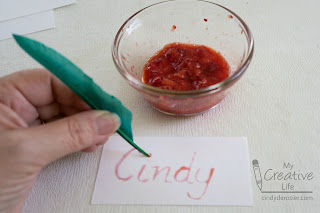 South Carolina's state insect is the Carolina mantis, a master of camouflage. Here's Trevor drawing one: 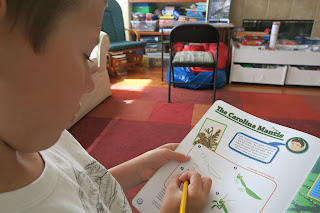 The recipe for South Carolina was shrimp and grits. Neither Trevor nor I like shrimp; fortunately, Little Passports predicted this and gave alternate instructions to make cheesy grits instead. Much better! 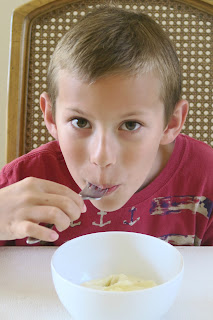 Trevor and I had a wonderful time learning all about South Carolina. Thanks, Little Passports, for another fun and educational experience.