I don’t post on Cindy’s blog often, but it’s not because I’m not creative. Many of the photographs she shares are ones I’ve taken, and you've seen various projects I’ve built for Cindy’s craft room. My creative passions involve photography, astronomy, and building things with my hands.

I’ve been interested in both astronomy and photography since I was young, so it is natural that I’ve made many attempts to photograph various astronomical phenomena. Five years ago, I witnessed and photographed both an annular eclipse of the Sun... 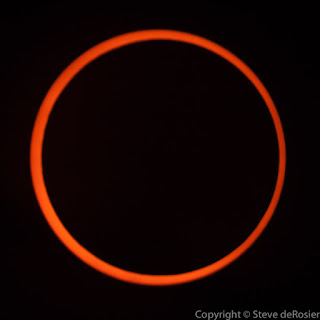 ... as well as Venus transiting across the face of the Sun. 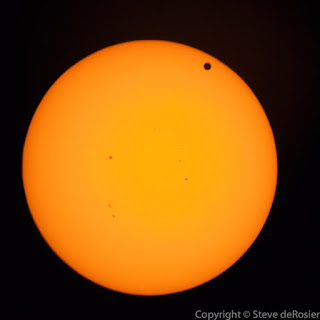 Both events were amazing opportunities in themselves, but what I’ve always wanted to do is witness a total eclipse of the Sun. The eclipse last week was my first opportunity that was close enough to go see.

Eclipses do take some planning, however. I’ve been counting on going to see this eclipse for over two years. First, you have to choose the right spot. The moon’s shadow across the earth (called the “umbra”) is only about 60 miles wide. It moves across the landscape at a pretty fast speed. You also need to pick a place where you’re not likely to have any cloud coverage.

I was lucky that a perfect place for viewing the eclipse was only about 500 miles from my home here in California. So, for the past several months I planned on seeing the eclipse from Madras, Oregon. Madras is perfect as it is in the exact center of the eclipse track and is high desert so it rarely has any cloud cover during the month of August.

Of course, the very things that made it attractive to me made it attractive to many people. I do not know the final numbers, but the town of Madras (population 6,200) was expecting nearly 100,000 people to come see the eclipse. Every hotel, business with a parking lot, or farmer with a field was selling spots for camping or just parking for the time of the eclipse. With this much overloading, I planned to get up there in plenty of time and to be able to just stay put. Thankfully my parents and my sister agreed to accompany me to the eclipse and so we were able to take advantage of the camping opportunity that their motor home offered.

We went up to the area around Bend several days before the eclipse, both to enjoy the many things that central Oregon offers as well as to be within striking distance of Madras for the day before and day of the eclipse. On the day before the eclipse, we relocated from our campground at Sisters to Oregon Solartown Campground in Madras. This 40 mile drive took us about two hours: the first hour plus to get there, and a second one in the line to get into the campground. 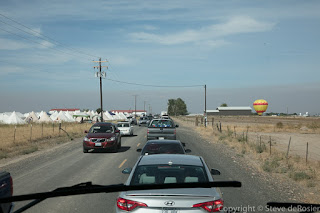 We benefited from my good planning – we left Sisters at 8am and so we only spent about 45 minutes in the long line, which eventually reached 2 miles long. I talked to others who didn’t arrive in Madras until after noon who spent over two hours in the backup!

When we got into the campground, we lucked out and got the best spot imaginable: on the eastern fence-line at the highest point in the campground. It was great being on the east side because the eclipse started at 9 am, and this meant no one would be able to get in front of my cameras. After setting up the motorhome, we had lunch and settled into a relaxing afternoon. We mainly passed the time watching more people arrive and setup their camps. At one point in the afternoon, the view from the top of the motorhome looked like this: 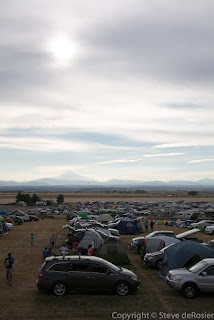 Notice that the clear skies that I came to Madras for were less than clear. We had a bit of cloud but with major fires burning both north and south of Madras we had lots of smoke and haze in the sky. I spent all afternoon hoping that the next day would dawn clear.

My priority was to experience the eclipse, but as I am a photographer with astronomy equipment I had to photograph it too. Totality only lasts about two minutes and according to many accounts only feels like eight seconds, so I knew the key to getting good photos and enjoying the eclipse was going to be preparation. A few weeks ahead of time, I rented a lens from lensrentals.com. I purchased Baader Astrofilm from Astro-Physics and made filters for my lenses. And the day before leaving home, I set everything up and tested it so that I knew I had everything packed and it all worked.

The night before the eclipse I set up my telescope and fully aligned it. While I wasn’t planning on taking photographs through the telescope because the focal length is too long, I was going to piggy back on it so I could use the mount to track the eclipse for the camera. With all that done, I went to bed. 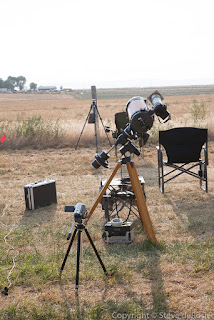 It was a lot to set up, but with everything finally ready, I had time to explore, talk to people, and just relax before the eclipse started. Here’s what Solartown looked like that morning: 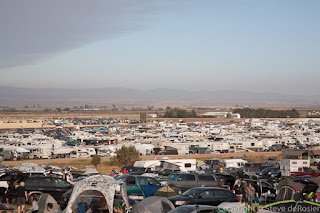 Note the heavy smoke in the sky.  Luckily for me, it didn’t affect the eclipse much.

I was obviously not the only person taking photographs of the eclipse. I saw many telescopes, cameras, and other equipment out. I even met one man from France who was taking spectroscopic photographs of the event. Here’s what our fence line looked like: 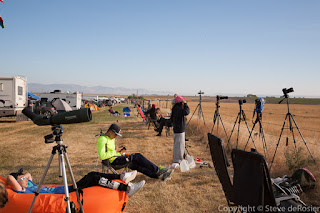 While I’m sure the majority of people in Madras that day were Americans, I met people from all over the world. The aforementioned man was from France, another from Holland, and the people right next to us were from China.

On to the eclipse itself. The Sun has been in a “minimum” lately and has not been showing many sunspots. Thankfully it put on its makeup for the show and several popped up in the last week before the eclipse. Here’s how the sun looked right before the eclipse: 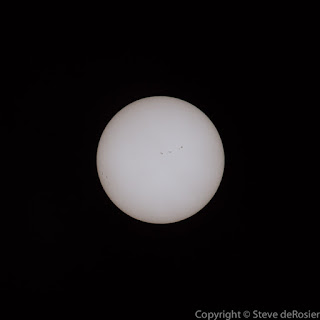 Cindy and Trevor did not travel with me, since Trevor started middle school the day I left. As I was planning my trip, Cindy asked me what she and Trevor would be missing by only seeing a partial eclipse. My answer? “Everything." A partial eclipse is as different from a total eclipse as night and day. 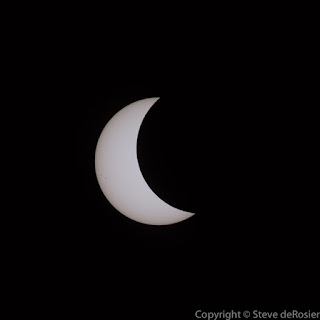 The partial eclipse started in Madras at 9:06 am. This is what we refer to as C1. Over the next hour, it got darker and the air started to cool. My mother and sister both complained about getting chilled. Along with the cold, my skin started to prickle. I’m sure there was no actual real effect there beyond the excitement of the moment, but it was still real. 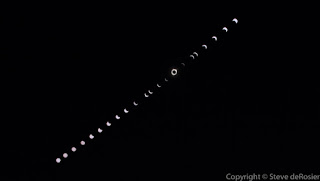 As we approached totality, known as C2, people started getting quieter. Then a huge shout came up from the main campground area about a quarter mile to our west. Moments later, Baily’s Beads and the Diamond Ring appeared and it was time to remove our glasses and filters.

My mother was so entranced by the partial, that when it suddenly went black, she was just staring at a black sky and didn’t understand why she couldn’t see anything. My sister reminded her to take her glasses off and I could hear a gasp.

This was what we were all there to see. A total eclipse of the sun. The Sun’s corona, which is only visible during an eclipse. I hardly have the words to express the moment. I had waited over 30 years from the first time I knew I wanted to go see an eclipse to the moment I actually got to see one. And it was worth every moment, every effort at planning. It was a momentous and life-changing event, right up there with getting married, my son being born, and any other major event in my life. I loved and relished every moment of it. Unfortunately, those two minutes of totality only lasted exactly 8-seconds because during an eclipse time just flies that fast. 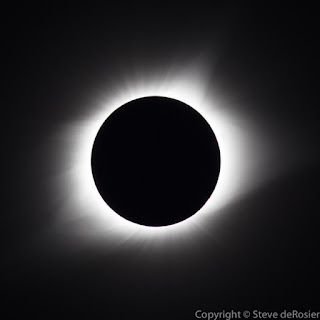 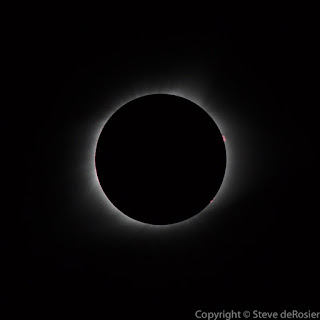 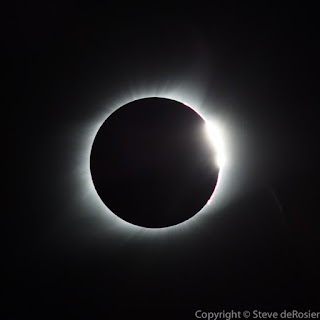 Even after all that, there were still photos to take. The Diamond Ring appeared again and the filters went back on. Many people hopped right in their cars and zipped out the second totality was finished. Over the next hour, I continued to take photographs so I could do the composite series I wanted to do. I talked to people and gave out cards to this blog. I tried to sear the moment of totality in my mind.

After the eclipse, I spent a couple hours breaking down my equipment while my family started to get the motorhome ready to travel.  Finally, at 20 minutes to 2pm, we left. The 40 mile trip back to Bend Sisters Garden RV Resort took forever: after six hours of sitting in traffic we were finally “home.” 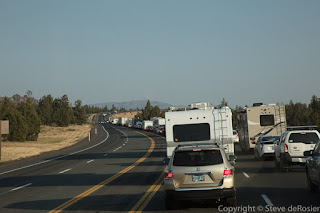 Was all of it worth it? Absolutely. I am now hooked and someday will go see another total eclipse. However, I should do the next item on my bucket list first: go see the Aurora Borealis.
Posted by Steve at 7:00 AM