Kill a Kit: A Dozen Cards

In scrapbooking lingo, to "kill a kit" means to use up the last remaining bits and pieces of a set of supplies. A typical kit might have a dozen pieces of patterned paper, a sheet of stickers, some die-cuts, and an assortment of other embellishments. Making the first few projects is easy, as there is an abundance of coordinated material to work with. But as you work down toward the end of the kit, you're left with odd-sized scraps, the busier papers, and other items that are more difficult to use.

When it's time to kill a kit, I usually turn to cards. They're smaller than layouts, so dealing with small scraps is less of an issue. And there's no need to coordinate with photos, so busier patterns aren't a problem. Case in point: 12 cards from a pile of scraps, none larger than a card base. 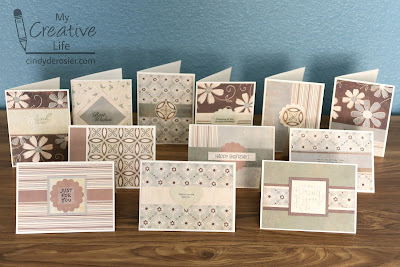 There's a lot of piecing going on in these cards. In most cases, what looks like a solid card base is actually multiple pieces with the gap between them hidden by a narrower strip. I kept going and going until I didn't have enough left to make another card. Kit officially killed!