The Winter Olympics open Friday in PyeongChang and I'm so excited! My favorite sports are the ones that seem impossible, because I enjoy thinking about the physics behind what looks impossible but obviously isn't. I also like imagining what it must be like to try some of these sports for the first time. I'm thinking that a person doesn't forget their first attempt at ski jumping, for example.

The closest I'll ever get to ski jumping, besides watching the Olympics, is this ski jump craft. I'm excited to add this to my growing collection of Olympics crafts! 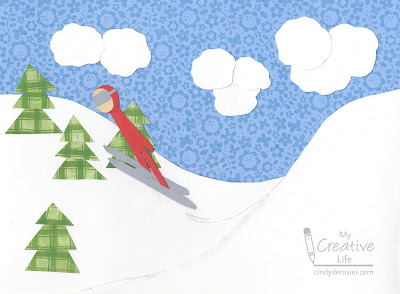 If you follow Fun Family Crafts (and you should), this project might seem familiar. Long story short, the site owner (Amanda Formaro) made a ski jump project years ago for a site that is now closed down. When that happens, we host the project directly on FFC so that it's not gone forever. I'm the one who takes the image and instructions and writes them up using our format.

The completed tutorial for Amanda's project is here. It includes a pattern, which is something I generally avoid. But in this case, I printed out Amanda's pattern and decided to make my own version of her craft, using different materials than she did. My goal would be to stay 100% true to the pattern (very hard for me).

Step 1 was digging through my scraps of patterned papers. I found a green plaid and used it to cut out triangles. I fit them directly on her pattern before gluing them together to make trees. 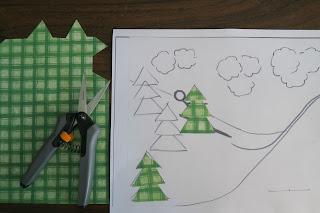 I found a glittery blue and some smooth white. By holding the papers and the pattern up against the window, I was able to trace and get the exact same angles. 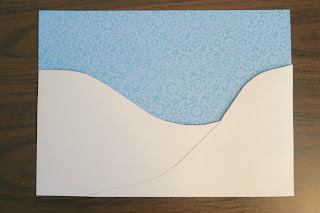 Here's Amanda's pattern on the left and my version on the right (minus the skier). So far, it's a perfect match. (So rare for me!) 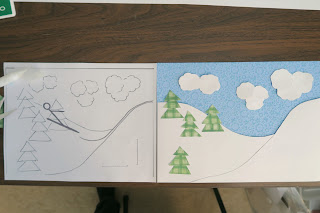 I did end up deviating ever-so-slightly with the skier. I cut two skis from silver paper rather than the one shown on the pattern. I removed the scarf from the pattern and added an arm, held low next to the body. I put goggles on the face, mostly to avoid having to draw facial features. 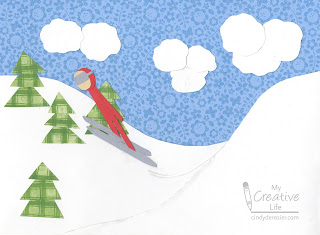 Make this fun craft by following Amanda's directions, using my instructions, or by creating your own version! If you make one, I'd love to see it!

So what are your favorite sports at the Winter Olympics?