Our next virtual trip through Little Passports taught Trevor and me all about New Hampshire. I hadn't realized New Hampshire has some of the highest peaks on the East Coast. Nor did I know that Mt. Washington in New Hampshire was the site of the fastest measured wind gust in history (231 mph).... until 2010! (The story of how they lost that title is pretty interesting.) To learn more about how wind is measured, Trevor followed the directions to build a model of an anemometer using straws and paper cups. 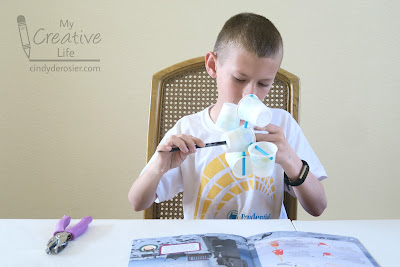 While this anemometer can't measure wind speed in miles per hour, you can use it to measure revolutions per minute. Trevor achieved some pretty decent speeds by blowing on it! 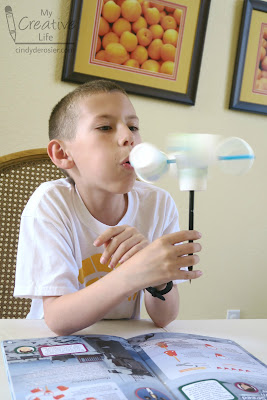 The state journal was full of activities about New Hampshire's natural beauty, including the granite peaks, vibrant fall color, and peaceful lakes. The model was of a log cabin that you'd find in the woods or New Hampshire. 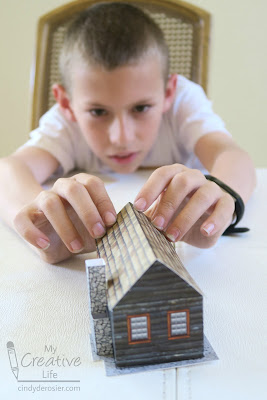 We solved a crossword puzzle about the 5 major rivers that originate in New Hampshire. By unscrambling shaded boxes, we learned one of this state's nicknames: The Mother of Rivers.

The next two activities were about New Hampshire's role in presidential elections. Since 1952, New Hampshire has been the first state to hold primaries. (It's written into state law: “The presidential primary election shall be held on the second Tuesday in March or on a date selected by the secretary of state which is seven days or more immediately preceding the date on which any other state shall hold a similar election.”) The assignments asked us to create slogans and a campaign poster as if we were running for office. Instead, we imagined what Trouble's campaign slogans would be if he were running for president: "Happy rabbits are cage-free!"

We did a matching and searching activity about the Portsmouth Naval Shipyard, solved a dot-to-dot about the black bears of New Hampshire, and then did the cooking project - hot apple cider. We made apple cider often so it wasn't something new... except for the recommendation to add a teaspoon of maple syrup to the cider. We'd never tried that and, not surprisingly, it was delicious!

Trevor and I had a lot of fun learning all about the Granite State and look forward to exploring it in person together some day. 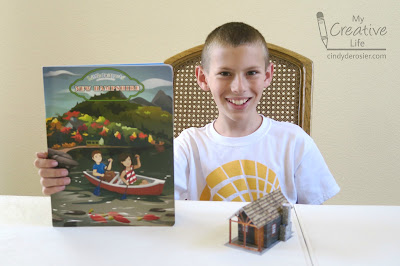 Thanks to Little Passports for another fun and educational adventure!