Time to share all the fun details from Trevor's narwhal-themed birthday party! 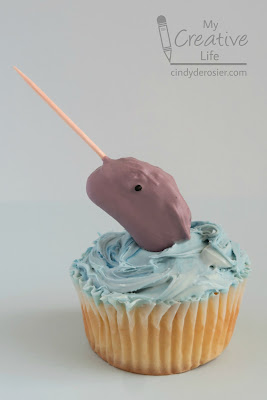 For the fourth year in a row, Trevor opted to have his party at the ice rink. It makes everything so easy for me, because all I have to do is bring the cake/cupcakes. They provide everything else. The kids skate, eat lunch, skate some more, eat cake, and skate some more. As long as they'd like, actually. Though after 3+ hours, they were exhausted! 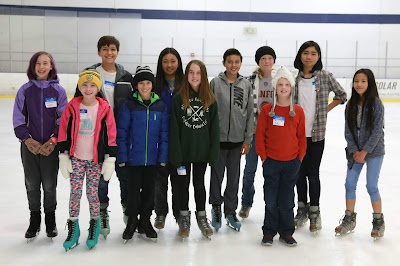 Trevor worked with me to design the cupcakes. Through trial and error, we worked out a way to make cute and easy narwhals. We started by putting toothpicks into Zachary Fruit Slices. Then we dipped each Fruit Slice into a bowl of Candy Melts (10 black discs and 30 white discs mixed to make the perfect gray and enough for 18 narwhals). The toothpick made a very convenient handle that allowed for full narwhal coverage. After dipping each narwhal, we set them on waxed paper to dry, then added tiny black sprinkles for eyes. 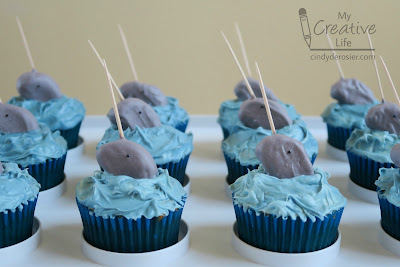 We frosted each cupcake with blue frosting, then nestled in a narwhal. We put our cupcakes directly into our 3-in-1 cupcake caddy (LOVE that thing). Here they are on the dessert table at the party, with Trevor's stuffed narwhal. It was a souvenir from when his Cub Scout pack spent the night 'sleeping with the sharks' at the Monterey Bay Aquarium a few years ago. 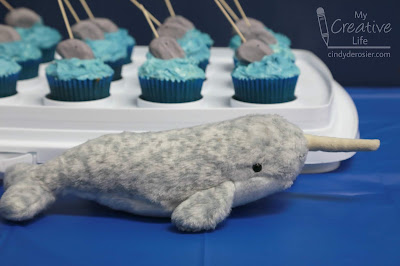 Rather than use a boring candle for Trevor's cupcake, I made a few changes to a store-bought whale candle pick and ended up with a narwhal. Here's the before and after: 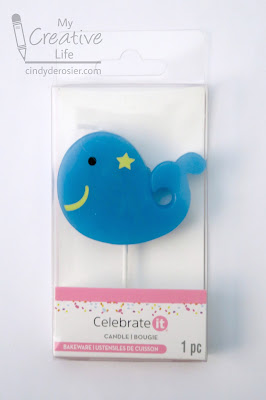 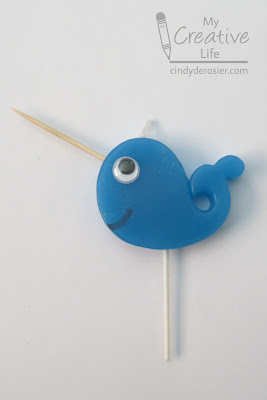 Just use a fingernail to gently scrape the yellow star and the mouth off the candle. It flakes off easily. Glue a googly eye over the black eye, use a Sharpie to add a smile, and then gently twist a toothpick into the forehead. Remove the toothpick and break it in half. Put a drop of glue in the hole, then put the toothpick back in the hole, broken end first. 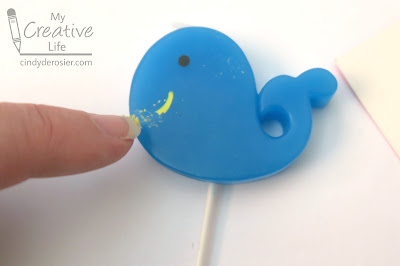 Here's the birthday boy with the narwhal candle lit. 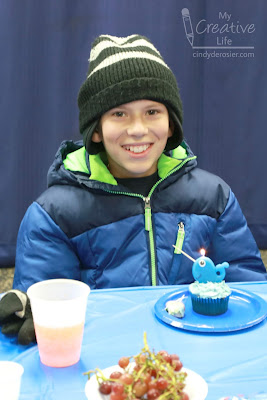 We added one other fun narwhal touch to the party. We started with a wooden dolphin shape and some wood dowels. We broke off the dorsal fin, then used sandpaper to smooth off the narwhal's back. We sanded off the bottlenose to make the rounded snout of the narwhal. Then, we painted it gray. When it was dry, we glued on a toothpick tusk, a googly eye, and a dowel. 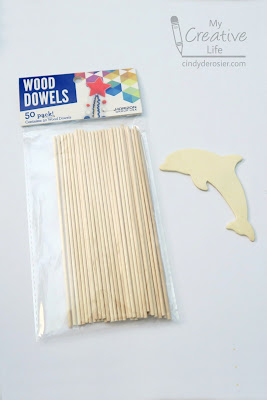 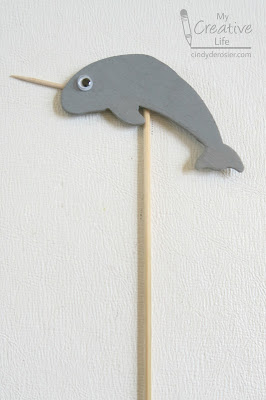 The party guests could use the narwhal-topped dowels to create skewers of candy. 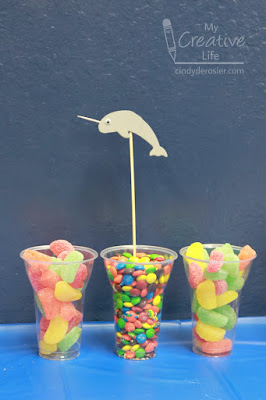 We made one final narwhal item, but did not end up using it at the party. We slit an empty wrapping paper tube vertically, formed it into a tusk shape, then wrapped it with masking tape. It's now a cool ring toss game!

As always, I loved working with Trevor to plan a fun party to match his theme idea. It turns out that narwhals make a pretty good party theme!
Posted by Cindy deRosier at 5:00 AM