Growing up, my family took a lot of road trips. At least once a year, we headed north to the Seattle area where my grandparents lived. It took about 14 hours with an overnight stop somewhere in Oregon. We spent many weekends in Tuolumne County, about 2.5 hours from home, where my dad built a cabin. We took trips to San Diego, to Disneyland, to San Simeon, and to Tahoe. There were long rides to the various camps I attended over the years, as well as the countless 4-H activities across the state. Once I was in college, road trips with friends became a regular thing. During those long drives, we entertained ourselves with car games. 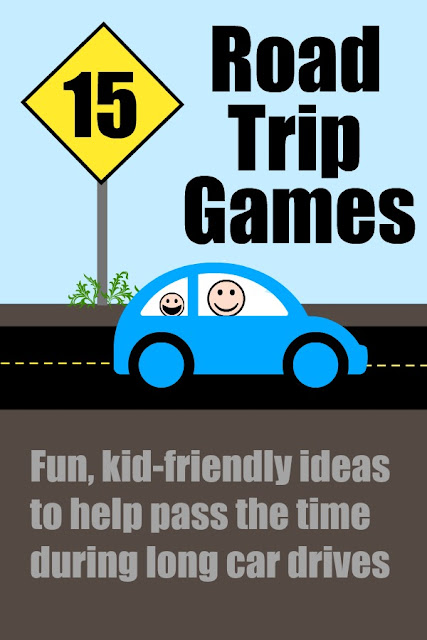 I'm actually headed out on a road trip today! My friend Jennifer is traveling to Pinners Conference with me and will be assisting during my presentation tomorrow. Our drive is about 450 miles and involves LA traffic, so there will be plenty of time to try all of these favorites from my childhood and beyond.

The goal of the ABC Game is to find the letters from A to Z in order, using signs on buildings, street signs, billboards, etc. When you find a letter, you call it out (“A, Arby’s!”) and no one else can use Arby’s for their letter A. Move on to the next letter immediately. (“B, boulevard! C, California! D, donut!”) Usually, the letters J, Q, X, and Z are catch-up points, so keep your eyes peeled for a Jiffy-Stop, Quality Inn, railroad Xing, and a pizza parlor.

The goal of the License Plate Game is to find the most license plates from other states (or provinces- we saw a lot of British Columbia plates during our drives toward Seattle). When you see a license plate that is not from the state you are in, be the first to call it out, then record it on a piece of paper. No one else can use that license plate for their list, but if there’s another car from that same state, that’s fair game for your opponents to use. If you call out a state incorrectly (by jumping the gun and guessing what state is actually is instead of waiting until you can read it), everyone else gets to put it on their lists. After the drive is over, the person with the highest number of different plates wins. Or, play cooperatively and work together to try to find all 50 states.

The goal of 20 questions is to correctly guess what item your partner is thinking of by asking up to 20 yes or no questions. I play that any time you get a “yes” answer, you get to make a guess, which does not count as a question. There is no penalty for guessing; if you’re wrong, you ask your next question. If you guess the mystery item correctly, record the number of questions you asked and change roles. The winner is the person who guesses the item using the fewest number of questions. If neither person guesses each other’s item before 20 questions, play another round in which the item you’re trying to guess must fit an agreed-upon category, like animals, foods, countries, etc.

Choose a category that is broad, like hobbies. The first person says something that fits the category and starts with an A. ("Astronomy!") The next person says a hobby that starts with B. ("Birdwatching!") Continue taking turns until someone can’t think of something. You may end up looping the alphabet. When someone is stumped, the opponent has the chance to steal. If the opponent can name something that fits that letter, he wins a point and you start with a new category. If he cannot, you skip that letter and the person whose turn it was moves on to the next letter. There are no challenges. If someone thinks xeroxing is a hobby, so be it. (Just be sure to offer xeroxing as suggestion of something fun to do any time he asks, for the rest of his life.)

Choose an object that you can see, such as a bus. (Avoid choosing something that will be gone or you'll have passed by the time your opponents guess.) Announce, “I spy something that starts with B.” The other players take turns asking yes or no questions. They can use their question to guess what the object is.

Choose a common word, such as star. The first person has to sing a line from a song that includes that word (“Twinkle, twinkle little star”) and then the next person has to sing a lyric from a different song (“When you wish upon a star..”) Continue until neither person can think of another song, then the person whose turn it was picks a new word.


I'm Going on a Picnic

Work cooperatively to name as many celebrities as you can who have alliterative names (Charlie Chaplin, Ronald Reagan, Tim Tebow). There are a lot!

Before you travel, make 5x5 Bingo cards. Fill the spaces with things you might see on a road trip, like a police car, a windmill, a train, or a hotel. As you travel, mark off what you see using post-it notes. The person who gets five in a row first wins. Remove the post-it notes and play again.

Before you travel, write a story about the things you’ll be doing on your vacation. Remove several words per sentence, replacing them with a blank spot. Under each blank, indicate what part of speech you removed (adjective, verb, noun, etc). When you’re on the road, have people suggest words for each blank, then read the new version of the vacation with the silly words they’ve chosen.

Tell a story cooperatively - one word at a time! The first person says a single word, then the next person adds a single word that could follow logically. Keep taking turns, trying to add words quickly so that the story sounds smooth.

Sing along with a lyric-heavy song. If someone messes up, start over! My personal favorite for this game is The Gambler, though We Didn't Start the Fire is a great if you're up for a challenge, as is American Pie. Good times.

I can’t play Dots in the car because I get carsick, but it’s a favorite of mine on trains or waiting at restaurants. Draw a grid of dots as big as you want, but preferably at least 8 x 8. One at a time, draw a single horizontal or vertical line between two adjacent dots. Take turns drawing lines until someone draws the fourth line that completes a box. When that happens, that person puts their initial in the box and takes an extra turn. That extra turn may allow them to complete another box, and then another. Be careful not to draw the third line on a box so that your opponent can’t complete a box! Keep going until all the boxes are filled in, then count up how many each person has to find out the winner.

Put your playlist on shuffle. See who can be the first to identify each song as it comes on. Listen to the whole song, or skip ahead to the next one as soon as someone names it correctly.

Think of the name of a famous movie, then change the important words to synonyms. (“Gone with the Wind” could become “Absent with the Breeze.”) Take turns thinking up a movie and trying to guess.