What I Learned from Traveling to Europe for the First Time

Our family just returned from an amazing trip to Europe, beginning in Rome and ending in London. We were gone for 17 days and visited 7 new-to-us countries. And one new-to-us continent, as this was the first time any of us had been to Europe.

If you've been reading my blog for any length of time, you know that the deRosiers travel fairly often. A lot of our travel has been within the United States (read about the progress we've made to take Trevor to all fifty states before he's 18), but we've ventured beyond our country's borders as well. Since Trevor was born in 2006, we've been to five Canadian provinces, five Mexican states, a handful of Caribbean islands, parts of Central America, and Colombia. And now, 7 European countries.

Here's what our Visited Countries Map looks like as of today, 4/26/19. 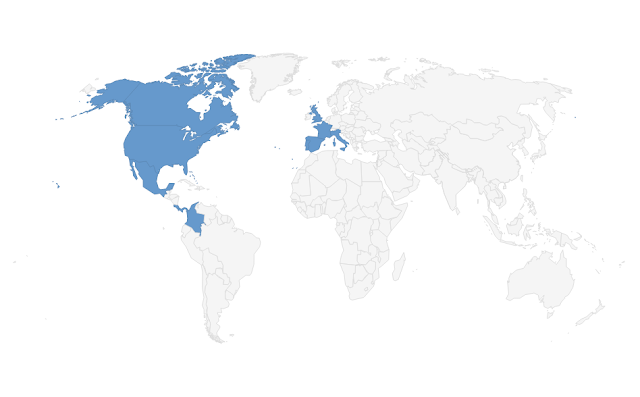 Make your own map here.

So while we did have experience with international travel (going through customs, using foreign currency, dealing with language issues, etc.) prior to our Europe trip, we weren't fully prepared for what to expect. Part of this is because I didn't do the planning. My parents treated our family and my sister's family to this trip in honor of my nephew Timothy's high school graduation. He picked the destination and my sister made the majority of the reservations for the nine of us. Kari did a great job, but without having done my usual extreme level of research, there were plenty of surprises in store for the deRosiers. But let me start from the very beginning (a very good place to start.)

Steve, Trevor, and I started out on Wednesday, April 3 with a flight from San Francisco to Frankfurt, Germany, where we would then catch a flight to Rome. Due to the magic of time zones, we left San Francisco at 3:00 pm, flew for 11 hours, and landed in Germany at 11:00 am on Thursday. Huge thumbs-up for Lufthansa, as they did an amazing job helping us adjust to the time change. They served us a delicious hot meal about an hour into the flight, then came around with free alcohol (!) which was quite a surprise. We didn't have any. We got a snack about an hour after that, then they turned off all the lights, covered the windows, and basically told us to close our eyes and go to sleep. They didn't interrupt us at all for about 7 hours, then abruptly turned on the lights, opened the windows, and fed us a hot breakfast. Even though my watch said it was the middle of the night and I didn't do much but doze off and on, it actually felt like morning when we landed! I totally didn't expect that.

When we booked our flights (one of the things Steve and I did plan ourselves), we thought that 1 hour and 20 minutes would be a perfectly fine layover time in Frankfurt. Our two flights were both with the same airline, so presumably the gates would be really close together. In our minds, we'd get off the plane, stretch, use the bathroom, walk to the new gate, and board the second plane. This is NOT what happened.

Some of you are already laughing about how stupid it was to plan such a tight layover. But for those who are as clueless, repeat after me: "I will NEVER allow fewer than 3 hours for an international layover in an airport I'm visiting for the first time."

So here's what actually happened: We got off the plane, luggage in tow because we'd opted to pack light and not check baggage. We tried to get on a shuttle that would take us to our departure gate (there was a gate/terminal change because of course there was). But the shuttle was crammed so full that not only could we not get on, but the shuttle couldn't move because the doors wouldn't close. Eventually some people got off, the doors closed, and the shuttle left without us. The next shuttle came a few minutes later. No problem - still plenty of time. We got off the shuttle and saw something horrifying: a huge, monstrous, snaking security line.

Never in a million years did I expect that we'd have to go through security to go from one gate to another within the airport flying the same airline, but we did. With our luggage, which I would have checked through had I known. We had about 35 minutes left when we finished with security... and then we discovered that we had to clear customs. ACK! We waited about 15 minutes, then finally got to the front of the line where the agent chatted with us in the distinctive way that airport security does to make sure we're who we say we are, entering the country for benign reasons. But that's the weird part! We WEREN'T entering Germany! We were trying to get on a plane to Rome. Why did we need to clear customs?!

With just over 10 minutes until our flight was scheduled to take off, we were sure the plane would leave without us. The customs agent told us we *might* make it if we ran as fast as we could. Of course, our gate was the farthest possible one away... and we were schlepping all our luggage. We ran until we couldn't run any more, at which point Steve and I took Trevor's luggage from him and told him to run as fast as he could to the gate and tell them we were coming. It worked; when Steve and I arrived at the gate, panting and sweaty and as disheveled as could be, the agents let us through.

We went down the gangway... but it did not lead into a plane. It led into a bus, which took off as soon as we entered and drove us to the gate next to our original gate! With mouths agape and sweat streaming down our backs, we got off the bus and onto our plane for the 2 hour flight to Rome. For the first time ever, I was one of those weird people who get on a plane and immediately use the airplane bathroom. I've always wondered why people wouldn't have gone in the much more convenient terminal restrooms. Now I know!

When we landed in Rome, we expected to have to clear customs. But no. We were so perplexed! We went through German customs to not stay in Germany, but didn't have to go through Italian customs to enter Italy? And then it hit us. We didn't go through German customs; we went through EU customs, which meant the flight from Germany to Italy was essentially a domestic flight, not an international one.

After 13 hours of flight time and the most stressful and calorie-burning layover ever, we were more than ready to leave the airport and start seeing Rome. I'll tell you all about our adventures in the Eternal City on Monday.
Email ThisBlogThis!Share to TwitterShare to FacebookShare to Pinterest
Labels: Europe, Travel Tips