Can you solve this maze? I'm pretty sure you can. 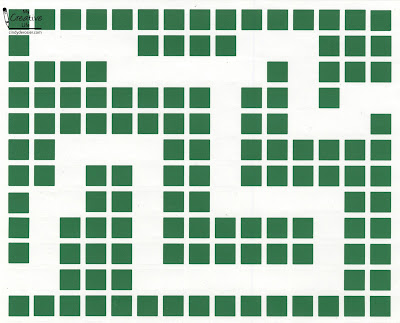 But can you solve it with your eyes closed? Not without using your eyes to memorize the path first!

As I was making my various projects using the leftover StickTogether stickers, I came across an extra sheet of green stickers where someone had used three of the stickers from the center instead of from an edge. I ran my finger over the opening and inspiration hit - I could remove more stickers to create a maze. As you know, Trevor LOVES mazes. I have so many wonderful memories of him filling in maze books over the years, drawing his own mazes, and creating maze-themed games. If Trevor had been born blind or visually impaired, would we ever have discovered his passion for mazes? The thought of him never doing mazes makes me so incredibly sad.

From there, my mind went to kids who do actually have visual impairments. So I set out to test ways I could use the StickTogether stickers to make a maze that you solve tactilely instead of visually. As I was working, I realized that by choosing the green stickers, I'd made a maze that was both tactile for blind children but also high-contrast for those with limited vision.

To make your own tactile and high-contrast maze, remove stickers from two opposite sides of a dark-colored sticker sheet to make a beginning and an end to the maze. Then remove stickers one at a time to create a winding pathway between them. I left two-sticker-wide walls between each path, testing frequently with my eyes closed to see if my fingers could follow the path. Then I added a dead end.

With the maze design complete, I experimented with ways to seal the maze so that the stickers wouldn't peel up. The easiest way was by simply smoothing clear contact paper over the top. When I did that, I realized that I'd made a placemat that could be enjoyed by any child, regardless of their visual abilities.

I'm happy to say that there are many tactile mazes available for purchase. Here are some interesting ones I found.