January is a busy month in the world of kids' crafts. In January, lots of people search for crafts about Arctic animals (as if penguins and polar bears somehow don't exist if it isn't winter in the US). They're also looking for MLK Day ideas, Groundhog Day puppets and treats, 100th day of school crafts, and everything having to do with Valentine's Day. Mardi Gras searches rise dramatically, as do projects featuring Presidents Washington and Lincoln. And then there's Chinese New Year. Technically, it's Lunar New Year, as many other Asian cultures celebrate it.
Something unique to Chinese New Year is that the crafts people want follow a 12-year cycle. This year, people want Ox crafts. Last year's Rat crafts won't be popular again until 2032, an eternity (and literally a lifetime) for a child. This time next year, the Ox crafts will hold no appeal as everyone makes Tiger crafts. No other holiday is like that. Can you imagine if everyone decorated for Halloween with only witches one year, then threw them all out (or stored them for 12 years) and decorated only with mummies the following year?!
Fortunately, there are some perennial Chinese New Year decorations that make excellent crafts. Red lanterns, firecrackers, plum blossoms, and fish are great choices. And then there are dragons. Dragons are unique among the 12 animals of the Chinese zodiac in that they are the only mythical creature. As a symbol of power and luck, they are an important part of every New Year's celebration. I had so much fun designing this dragon, made with wired ribbon! Affiliate links below. 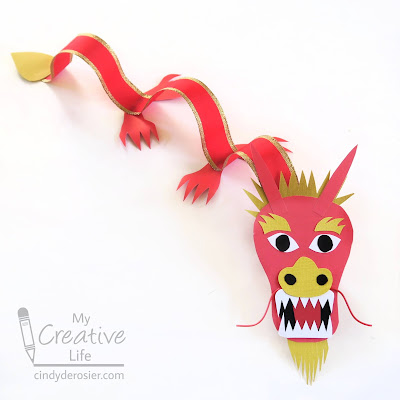 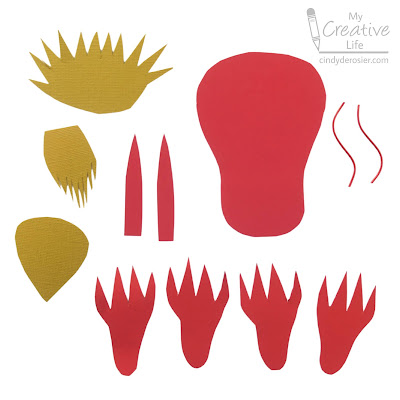 Cut eyes and teeth from white cardstock. Then cut pupils, nostrils, and a mouth from black cardstock. 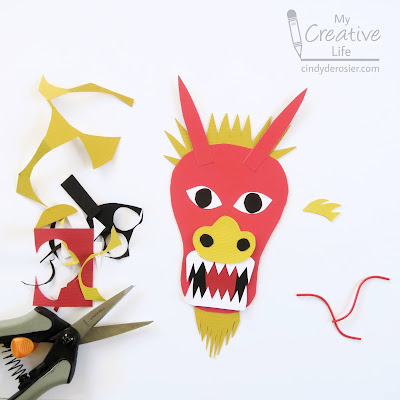 Glue all the face pieces together, then set it aside.
Bend the wired ribbon into gentle waves to form the dragon's body. Glue the tail to one end and the feet to either side of the ribbon where it touches the table.
Make a sharp fold to make the dragon's neck, then the glue the face to the folded portion. When the glue is dry, you can arrange your dragon however you'd like. 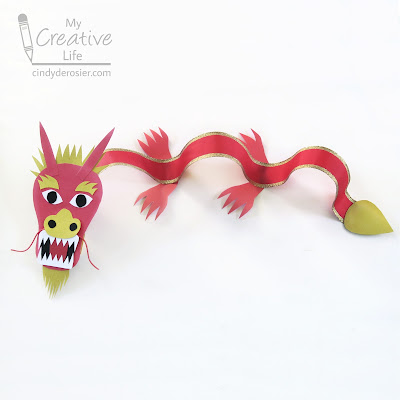 Obviously, you can change out the colors, features, and proportions of the dragon to make it more or less traditional.
Email ThisBlogThis!Share to TwitterShare to FacebookShare to Pinterest
Labels: Chinese New Year, construction paper, dragon, mythical creature, ribbon