This is the money gift I sent my nephew, Timothy, for Christmas 2020. 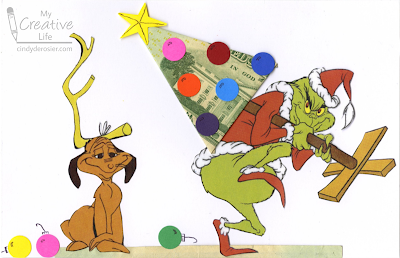 At first glance, it looks like a simple card. But if you look carefully at the tree the grinch is carrying, you'll notice that it's a $20 bill. Look more closely. The 'rug' is a second bill, folded with the rest tucked behind the card front.
To make it, I started by printing out an image of the Grinch sneaking off with a Christmas tree. I fussy-cut the image, then folded money to form a triangular tree that was the right proportion for the Grinch. I cut out Max, then made a card base to fit both characters. I taped the 'rug' to the back of the card front and used repositionable adhesive (affiliate link) to keep the front flap in place. I added the characters, then the tree. Finally, I punched cardstock circles and used the same repositionable adhesive to attach them to the tree and along the floor. I added details with a black pen, then attached the card front to its base. Quick, easy, and super cute!
Posted by Cindy deRosier at 5:00 AM