I recently finished reading a book in which the main character's mom had died giving birth to him. His father raised him alone and the seahorse was a powerful symbol for them, representing what a wonderful job he'd done as a single dad. I was thinking about this as I was going through our Father's Day crafts at Fun Family Crafts. While I've put a lot of effort into making sure our collection of crafts isn't just cards featuring baseballs, fishing pools, hammers, and neckties, there are almost no animal-themed projects for Father's Day.
I thought about making a seahorse project specifically for Father's Day, but the dads that I honor on Father's Day (Steve, my dad, and Steve's dad) aren't single fathers. I thought about making a penguin project. Penguin dads famously take care of their eggs for around two months without eating or moving, while the mom spends those two months eating to replenish the nutritional reserves she used laying the egg. My post-childbirth experience would have been a lot easier if Steve had been with Trevor 24/7 for two months while I did nothing but eat, but that's not the case either. So I decided against the penguin.
Ultimately, I chose a flamingo for my Father's Day project. Flamingoes mate for life; the pair build their nest together, take turns incubating the egg, and share parenting duties once the baby has hatched. One more reason to love flamingos! 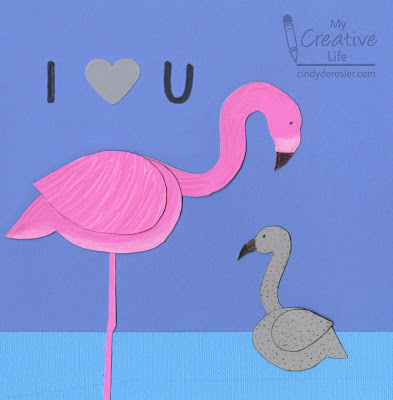 Select one color of blue for the background and set it aside. Cut a rectangular strip from a second blue for the water.
Daddy and Baby Flamingo each have three body parts: the main body, the wing, and the head/neck. I cut the bodies and wings freehand, but made myself a scratch paper pattern for the necks so that I wouldn't waste the cardstock if I didn't get it right on the first try. 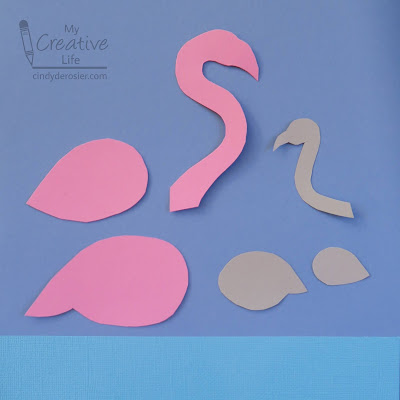 You will also need a pink leg and a grey heart, so cut those before throwing out the scraps.
Use a pink colored pencil to draw feathers on Daddy Flamingo's body, wing, and neck. Add a band of white to the top of the beak, then black on the tip of the beak. Add a black eye. Use the black pencil to add dots to Baby Flamingo's body, wing, and head, then color in the beak and add an eye. 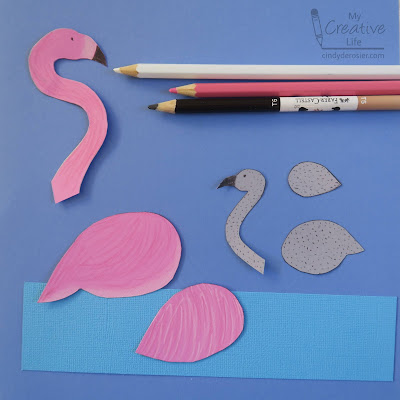 Happy Father's Day to all you Flamingo Dads out there, as well as the Seahorse (and Penguin) Dads!
Email ThisBlogThis!Share to TwitterShare to FacebookShare to Pinterest
Labels: bird, construction paper, Crafts for Kids, Father's Day, flamingo