Along with Trevor's donut birthday banner, I got him some donut-themed gifts and baked him a donut cake. It was the easiest decorated cake I've ever made. It barely counts as decorated - it's that easy. Affiliate links below. 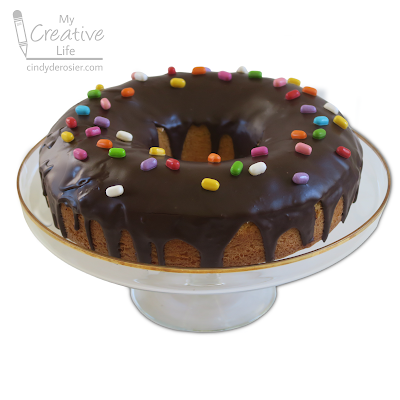 Follow the directions on the Cake Release to prepare a round tube pan. I don't own a round tube pan, but I made due with a bundt pan. I took extra steps to deal with the fluted pan; skip those if you have a smooth tube pan.
Bake the cake and let it cool completely. Frost the fluted area with buttercream, filling in the dips. Refrigerate the cake until the frosting is solid. Dip a knife into hot water, wipe it clean, then use it to smooth any ridges in the frosting. You want a nice, smooth surface (in other words, exactly what you'd naturally get if you use the correct pan). 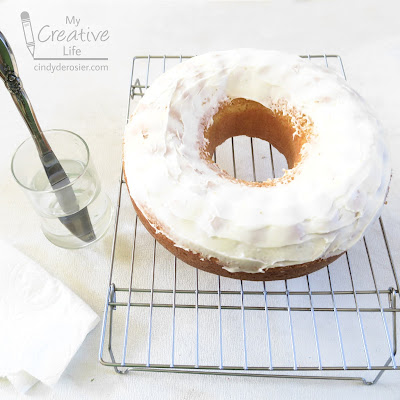 Make ganache by gently heating the cream, then adding chopped chocolate. Let it sit for a few minutes, then stir until it is smooth and glossy. Set the cake on a tray over a sheet of parchment paper. Let the ganache cool until it flows smoothly (without being runny), then spoon it over the cake. 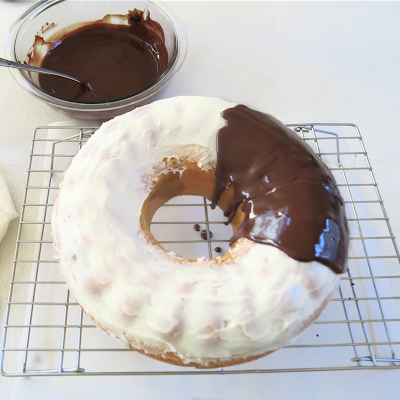 At this point, Steve walked by and pointed out that most donuts are dipped rather than drizzled, giving them a cleaner edge. He's totally right, but I was already committed so I continued to spoon on the ganache. For that cleaner look, pour your ganache into a baking pan that is slightly larger than the cake, dip the top, and then invert it onto the tray. Regardless of which method you use, the final step is to add the candies to mimic the sprinkles on a donut.

Here's the birthday boy with his cake. I thought I was being clever using the 5 (which I thought was left over from his 5th birthday party, but apparently not) along with a standard candle to make a 15, but the flames were a wee bit mismatched. Oh well! 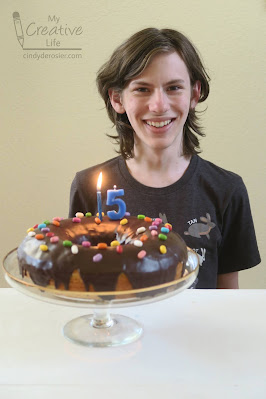 Because it was just the three of us, we have plenty left over. Not that I'm complaining - the cake was delicious!
Email ThisBlogThis!Share to TwitterShare to FacebookShare to Pinterest
Labels: Cake, Crafts for Kids, donut, Parties, Wilton