The idea of a s'mores pie popped into my brain a few weeks ago and I haven't been able to shake it. So I made one to share with friends. 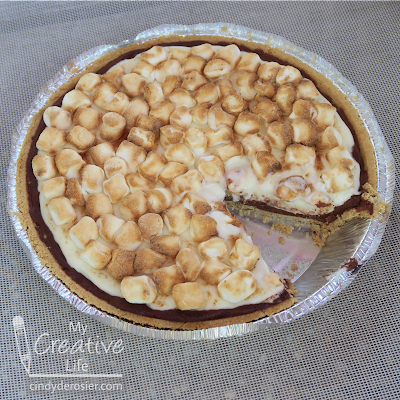 I started with a graham cracker crust, filled that with a layer of whipped ganache, and then added a sort of marshmallow cheesecake layer. 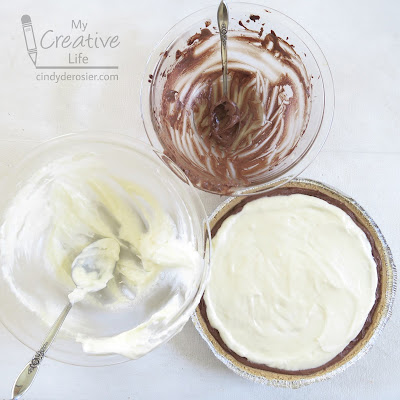 I sprinkled marshmallows on top... 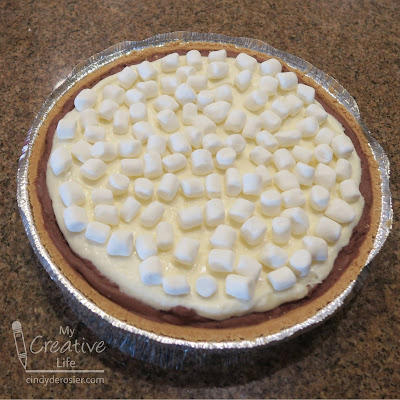 .... then used my heat gun to toast the marshmallows. We've found dozens of uses for the heat gun in the year and a half since I've had it, but this was the first time I used it for food. It worked like a charm! 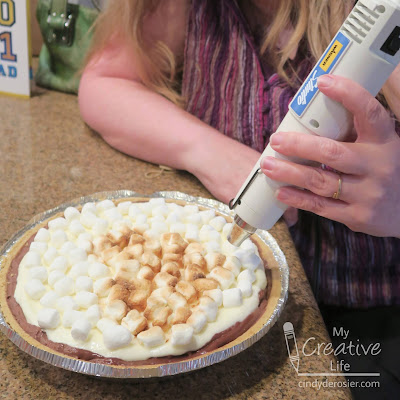 It was good. Not amazing, but definitely good. The tang of the cheesecake layer was a bit out of place. And that layer was definitely out of proportion - way too much compared with the chocolate and graham cracker. The next time I make this, I might skip the cream cheese entirely. Ooh, maybe replace it with a marshmallow ice cream? And I want to add more graham cracker - maybe as a crumble beneath the top marshmallow layer.  We'll see. This recipe definitely has possibility.
Here's the recipe as I made it. If you have other ideas for improving my pie, let me know in the comments!

I used a store-bought graham cracker crust. Because we were taking this to a friend's house, I wanted to use a disposable pan so I could leave them the leftovers. When I make graham cracker crust from scratch, I combine a sleeve of graham crackers (crushed into crumbs) with 3 T. brown sugar and 6 T. melted butter.

Heat 1/2 c. heavy cream for 45 seconds in the microwave. Add one 4 oz. bar of Ghiradelli 70% Cacao, chopped into small chunks. Let sit for 3 minutes, then stir until it is smooth. Put it in the refrigerator for 15 minutes to chill.

Whip 1 c. heavy cream. Set it aside. In a separate bowl, combine 8 oz. of cream cheese and 2 c. of mini marshmallows. Heat for 30 seconds in the microwave, stir, then heat for 30 more seconds. Whip for 2 minutes or until smooth and glossy. Fold in the whipped cream.

Remove the ganache from the refrigerator. Without cleaning the beaters, whip the ganache until it has doubled in volume and lightened in color. Spoon the whipped ganache into the graham cracker crust. Spread it into an even layer that covers all of the crust. Spoon the cheesecake layer on top of the ganache layer. Refrigerate at least one hour or overnight.
Sprinkle 1.5 c. mini marshmallows on top of the pie, then use the heat gun to heat them. The marshmallows will swell and brown. When they're evenly toasted, cut the pie into slices and serve.
Email ThisBlogThis!Share to TwitterShare to FacebookShare to Pinterest
Labels: pie, Recipes, smores