I made this snorkeling egg guy. And I photographed it. 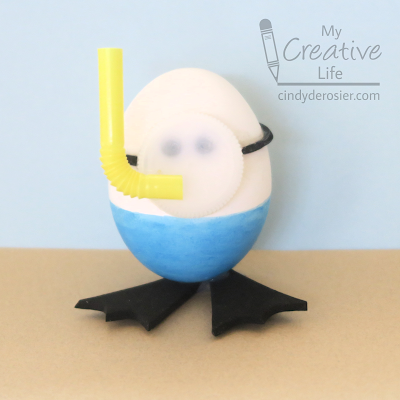 But it's not my original idea. This is another of those projects we'd featured at Fun Family Crafts, then the creator deleted their website, leaving us with a link to nothing. It's so frustrating. This craft is all over Pinterest as Dye-ving Dudes, but the materials list and steps to make it are gone. 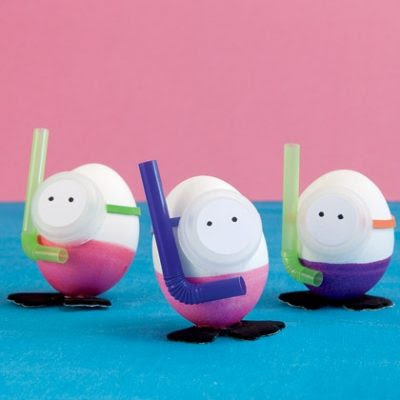 That original photo provides some clues to the materials. It's obvious that the snorkel is a bendy straw. Everything else I'm not 100% sure. It looks like the mask is a clear lid, but the strap looks like a rubber band. If the lid is indeed clear, the rubber band would show through, which it doesn't. It looks like the flippers might be a thick, white-core paper. And did they draw the pupils on with a Sharpie? I'm not sure.
My version may not be exactly the same as the original, but that's perfectly OK. At least now one version of the instructions exist. Affiliate links below.

Bend the straw 90°, then trim the excess off both ends to make a snorkel. Set it aside. Cut two black flippers from black craft foam, then cut a thin strip of craft foam for the mask strap. 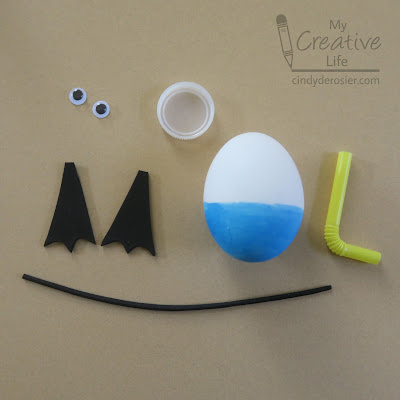 Use a dot of craft glue on the FRONT of the googly eyes, then place them in the clear lid. Set it aside to dry. Put away the craft glue; you'll use hot glue for the rest of the project.
Glue the lid to the egg to make the mask. Wrap the strip of craft foam around the egg. Trim it so that it just touches the edges of the lid. Glue it in place. Because it's such a thin area, I put a glob of hot glue onto my craft mat and then used a toothpick to dab it onto the foam before pressing it in place.
Glue the straw to the front of the mask. This is a change I made from the original, which has the snorkel down by the swim shorts. I prefer it higher.
Glue the flippers to the bottom of the egg.
I experimented with different ways to make the egg stand up without toppling. The easiest was to put a glob of hot glue onto the craft mat and balancing the egg onto it as shown here. 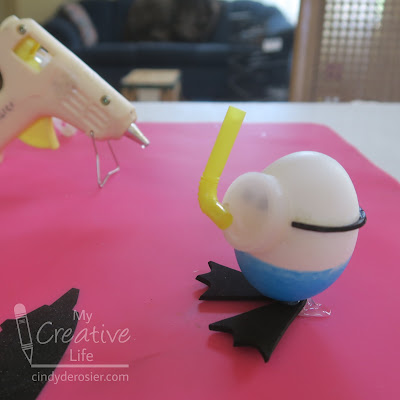 Let it sit for about a minute, then peel it up. Use scissors to trim away any glue that extends beyond the flippers.
The lid I used wasn't crystal clear, so the mask has a bit of a foggy appearance. If you can find a perfectly clear lid, great. Use that. I don't mind that my mask is foggy, but if you feel like the eyes aren't visible enough, use a Sharpie to color them onto the outside of the mask, as shown below. 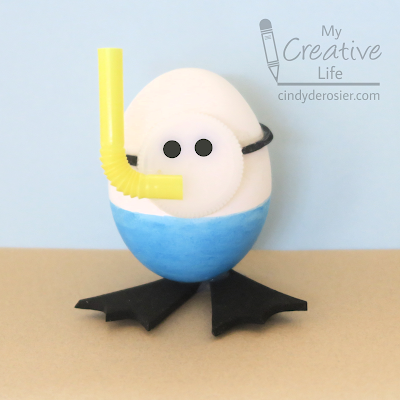 I had a few more egg project ideas I wanted to share with you before Easter, but I'm going to have to save them for 2023. Trevor's Eagle project has been consuming most of my daylight hours this week. While he still has three merit badges to complete, a pile of paperwork to do, and a Board of Review to pass before he reaches the rank of Eagle Scout, Trevor's project is officially done. I'll tell you all about it tomorrow.
Email ThisBlogThis!Share to TwitterShare to FacebookShare to Pinterest
Labels: craft foam, Crafts for Kids, Easter, egg, lid, sports, straw