It's hard to believe, but Trevor has been active in Scouting for almost 10 years. He started in Cub Scouts in 2012 as a first grade Tiger, then moved up through Wolves, Bears, Webelos, and Arrow of Light. In 2017, Trevor said goodbye to Cub Scout Pack 180 and bridged to Boy Scout Troop 482. During the past five years, he has worked hard and moved up through the ranks from Scout to Tenderfoot, Second Class, First Class, Star, and Life.
The final rank is Eagle. To reach Eagle, a Scout must:
While Trevor still has work to do to reach the rank of Eagle Scout, he has completed the largest and most difficult of the requirements: #5, the Eagle project. I described his project planning stages last week; today I'm sharing about the build and installation days.
On Saturday, a team of Scouts came to our house to construct the raptor silhouettes under Trevor's leadership. He showed them how to project the silhouettes at the correct size and trace them onto plywood. 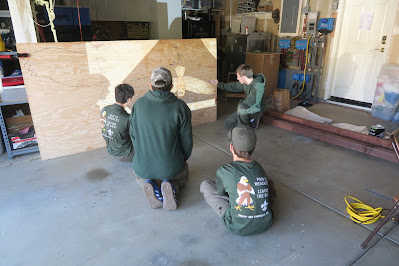 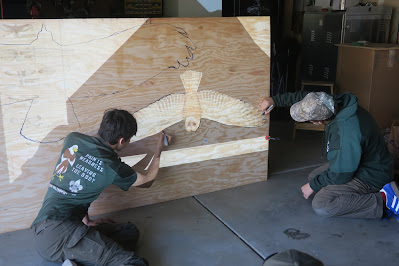 The older Scouts cut out the raptors, following all safety guidelines and under close supervision by Trevor and the adults. 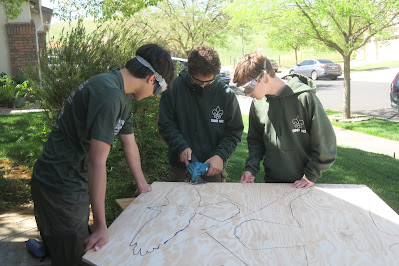 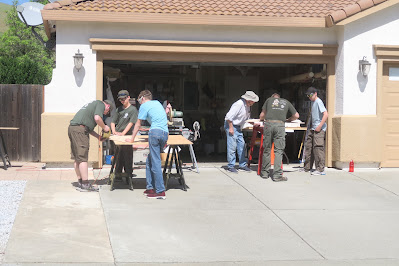 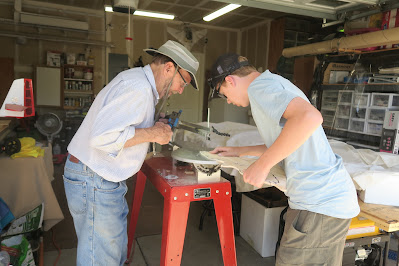 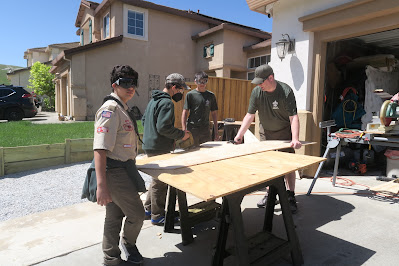 The younger Scouts filed the rough edges and prepared the silhouettes for painting. 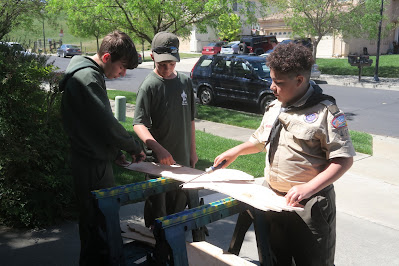 They also measured and marked the support pieces... 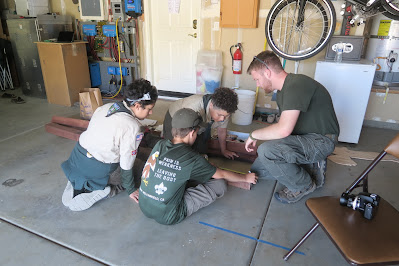 ... and carried materials back and forth between our house and the neighbor's. 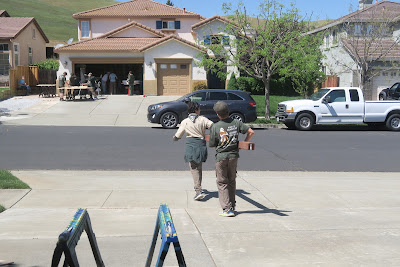 Our neighbor, Curt, was a huge help to Trevor throughout this project. Not only did he act as a mentor during the planning stages, he made two trips to the hardware store with us for supplies that wouldn't fit in our car, let us use his tools and his garage on the build day to have extra work stations, and helped with installation.
Another task that fell to the younger Scouts was preparing the QR codes that would go on the cages at the Raptor Center, encouraging visitors to (symbolically) adopt a raptor. 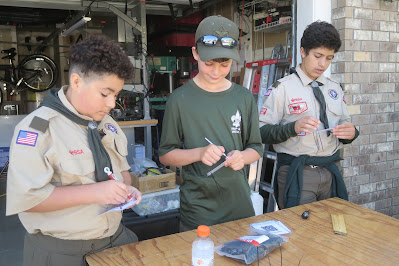 We ended the first build day with the QR codes ready, and all seven raptors cut, filed, and labeled with their support pieces prepped. 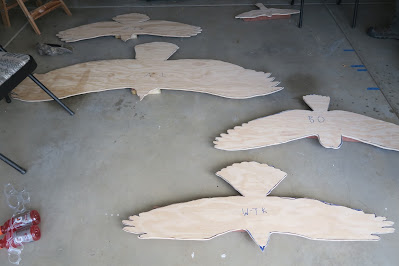 Sunday was all about painting. We had a smaller work crew, which was perfect. 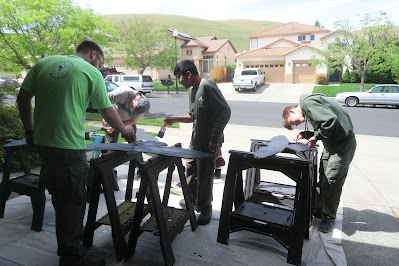 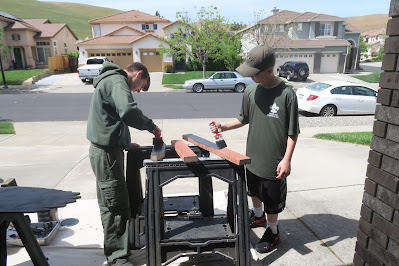 Each bird got two coats of paint, front and back. They dried quickly in the California sun. 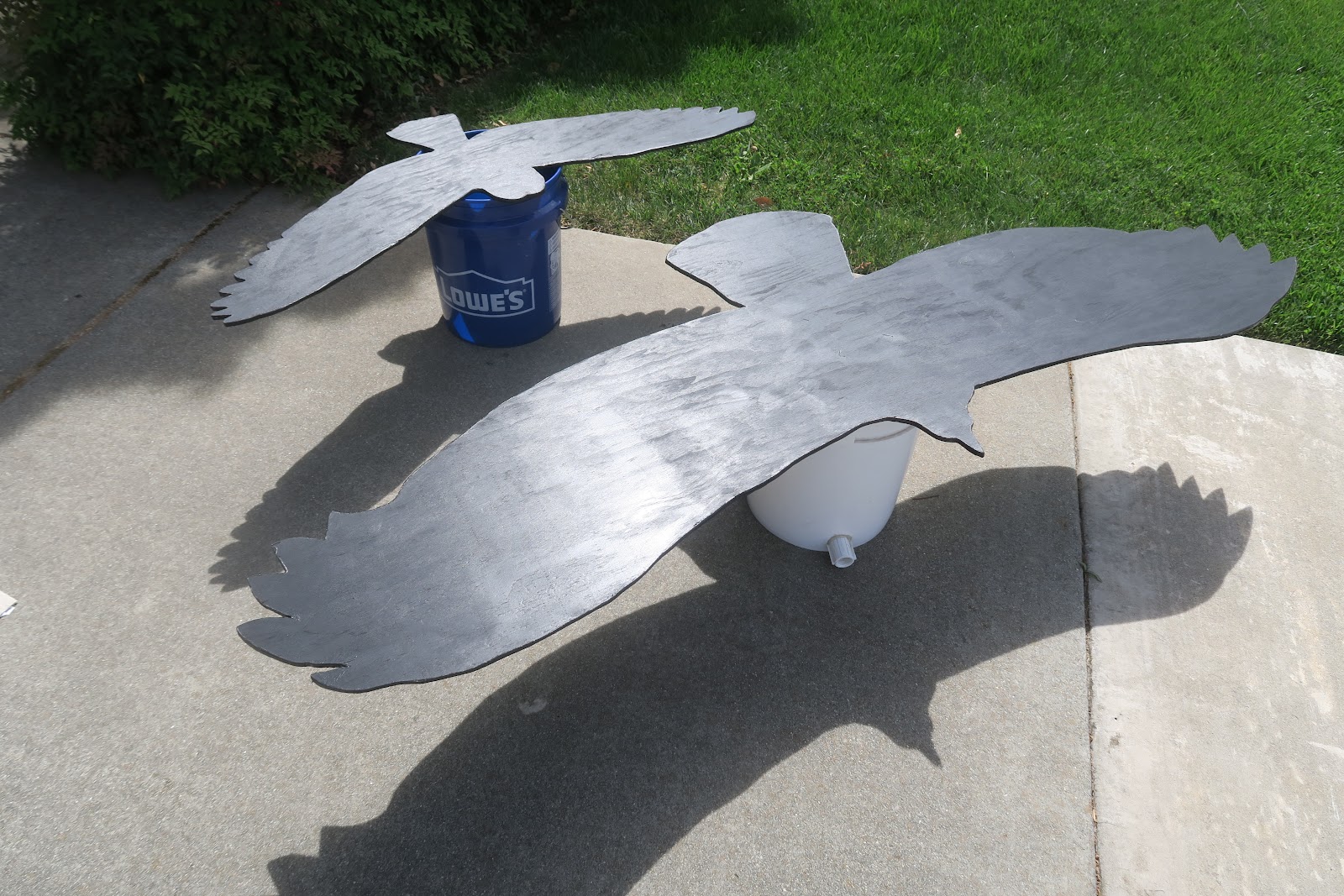 We moved the birds into the garage and let them dry completely. On Tuesday morning, we applied the labels. 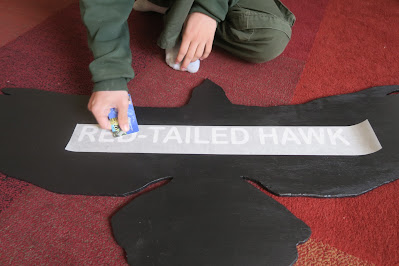 Then we loaded everything up and drove 25 miles to the California Raptor Center. This is the wall where his silhouettes will go, which is part of the Golden Eagle enclosure. 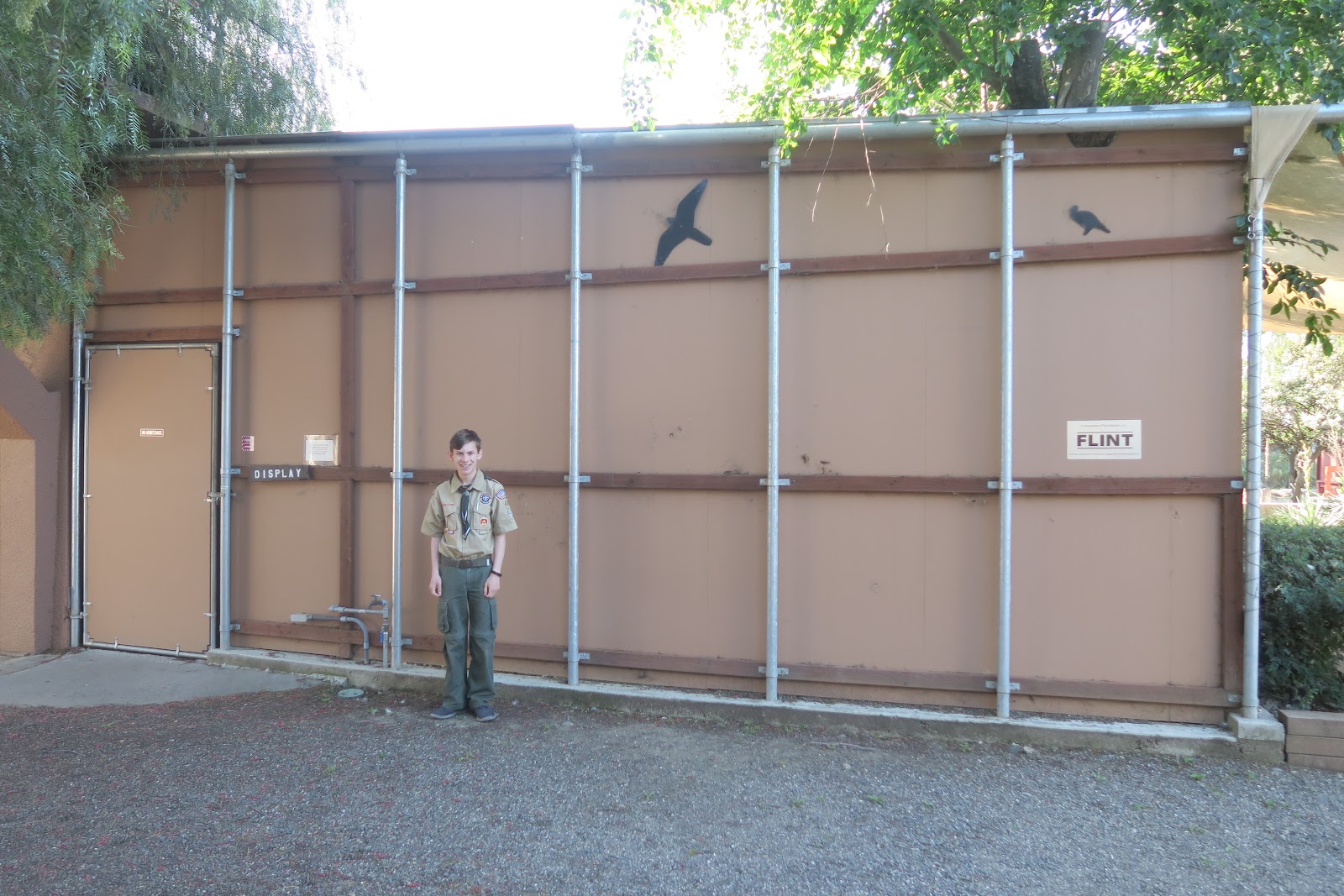 Over the next five hours, we hung the QR codes... 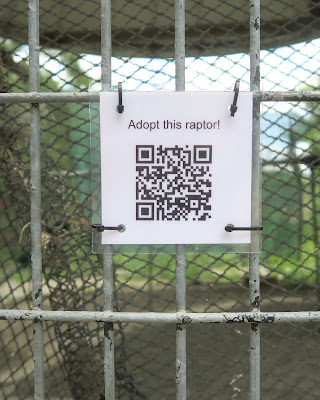 ... and the raptor silhouettes. 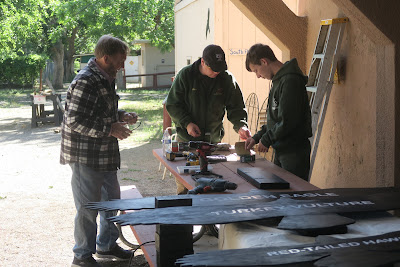 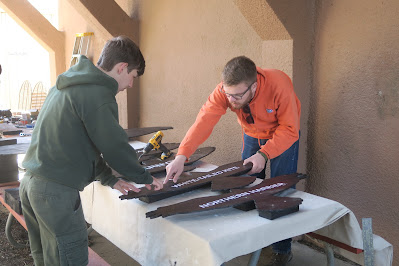 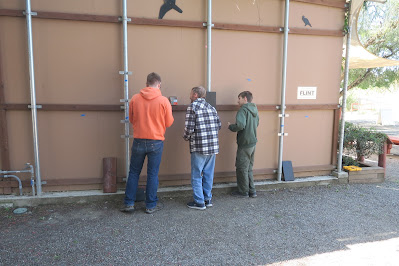 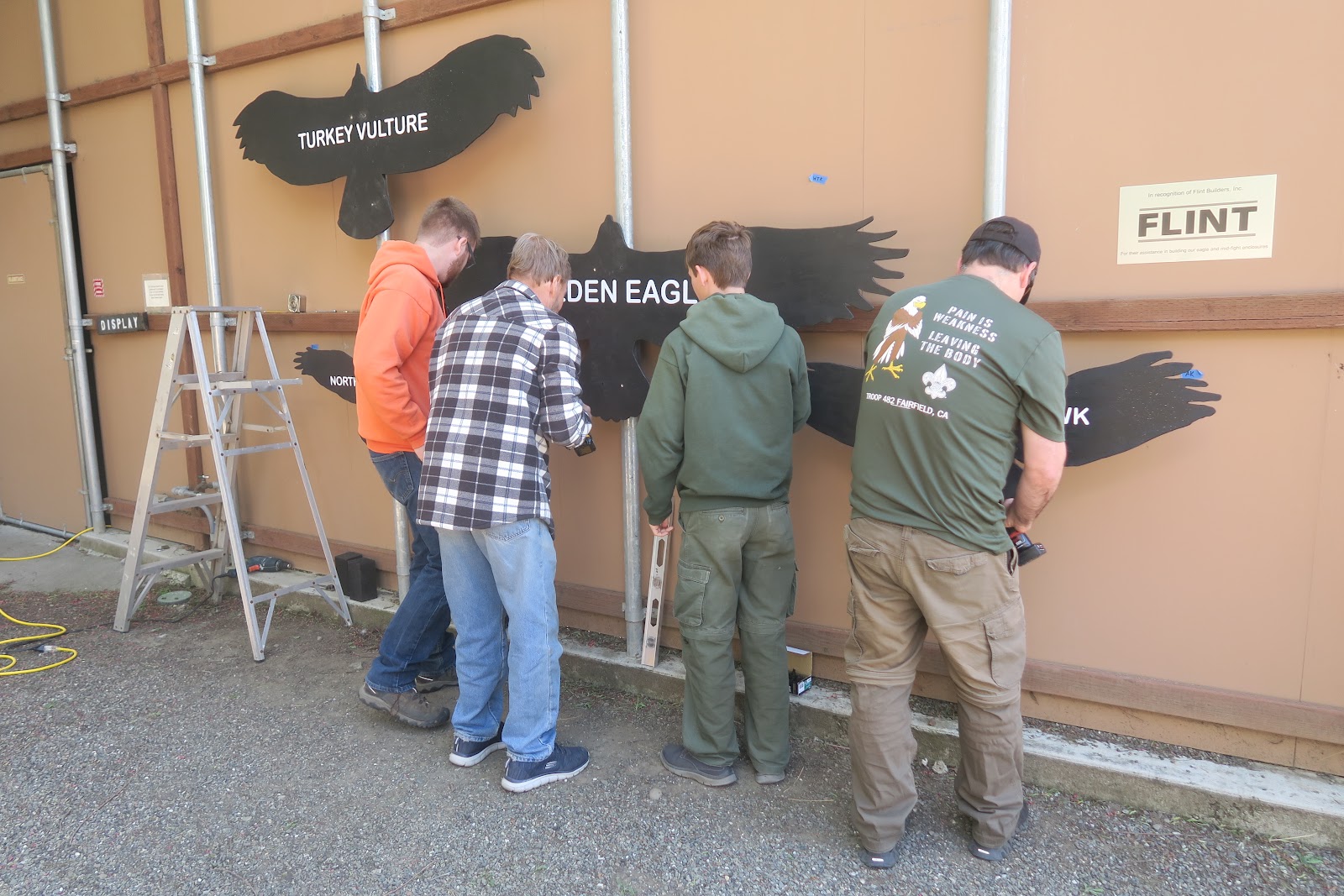 Here, we were arguing about the placement of some of the silhouettes. As the leader, Trevor listened to everyone's opinions and then made his own decision. 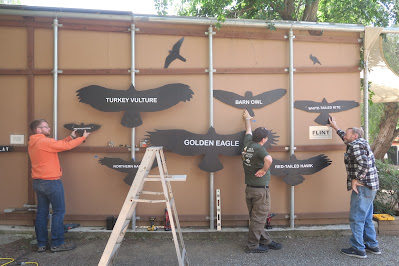 The most exciting part of the day came when we needed to mount support beams from the other side of the wall. Trevor sent Steve into the cage with two golden eagles. One, an 8-pound mellow male named Sullivan, was only mildly curious what was up. The other, a 15-pound nesting female named Fuzzy, had a lot to say (loudly) about this intruder. 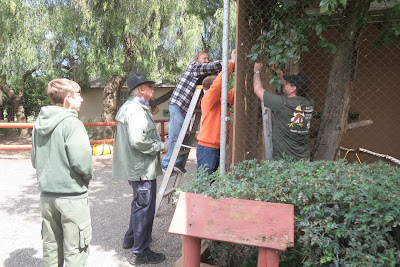 Steve was safe, of course. The staff entered first with large nets and kept the eagles on the far side of the cage. 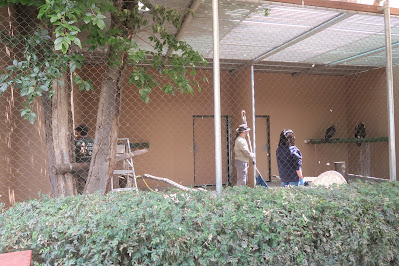 He was in the cage for about 20 minutes while Trevor directed everything from the best vantage point. 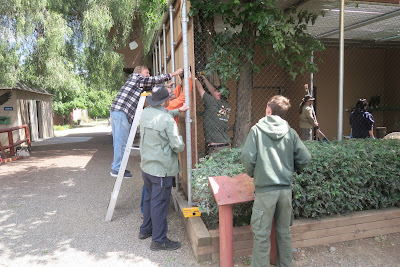 While they finished hanging the last silhouettes, I visited some of my favorite birds. Meet Kalli. Once I'm a bit better with colored pencils, I'm going to try drawing her. She's as charming as she is beautiful. 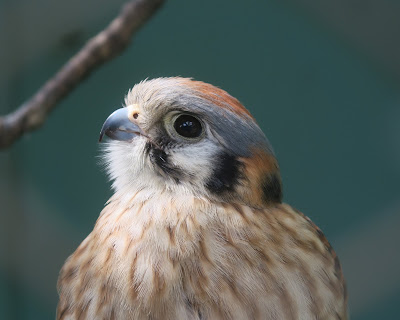 It was so exciting to see the silhouettes mounted on the wall after all that hard work. Here's the before and after: 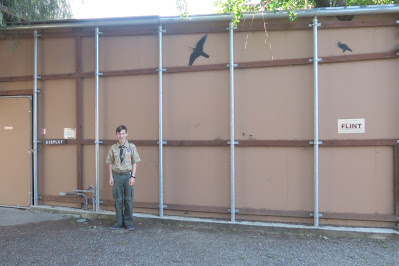 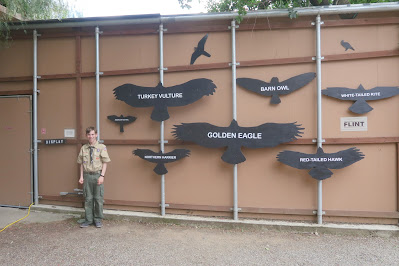 That represents a combined 198.5 hours of work. That total includes all the meetings, site visits, approval presentations, shopping, building, and installation. Trevor still has a few hours of post-project paperwork to do.
Plus, we need to make one more visit to the California Raptor Center. We'll be installing the plaque that signifies it as an Eagle project, but more importantly, Trevor will be presenting them with a check. Our friends and family were very generous in their support of Trevor's project and he raised over $500 beyond the materials costs. The money will help the Raptor Center in their mission to rehabilitate injured and orphaned raptors, as well as to care for the non-releasable resident raptors, including Sullivan, Fuzzy, and Kalli.
If you're local, I strongly encourage you to visit the California Raptor Center and see for yourself what wonderful work they are doing. Then measure your wingspan against the raptor silhouettes. It makes me so happy to think of all the people who will be doing exactly that.
Good job, Trevor. Only a few more steps before Eagle Scout! I couldn't be more proud of you.
Email ThisBlogThis!Share to TwitterShare to FacebookShare to Pinterest
Labels: Boy Scouts, Steve, Trevor