This is my tenth and final post about our family's adventures in Minnesota and Wisconsin. I suggest reading the first, second, third, fourth, fifth, sixth, seventh, eighth, and ninth posts before this one.

Our final day in Milwaukee was Sunday, August 7. We slept in a bit and had a leisurely breakfast at the hotel. Speaking of the hotel, there's something interesting about the Hyatt Regency Milwaukee that I didn't mention before. It was the location of an assassination attempt on Theodore Roosevelt. There's a display in the hotel entrance right where it happened. 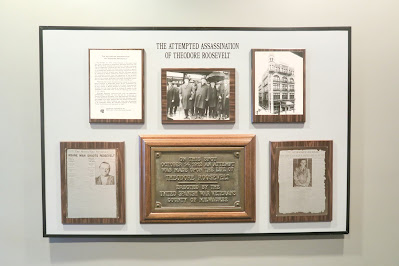 I'd heard the story before, as I'm sure many of you have, but I hadn't realized it happened in Milwaukee. And I certainly hadn't realized it happened in the hotel I chose for our stay. In case you're not familiar with the story, Roosevelt was in town campaigning for president when he was shot by John Flammang Schrank on October 14, 1912. The bullet hit Roosevelt's steel eyeglass case, passed through the 50-page campaign speech Roosevelt was carrying in his jacket pocket (entitled "Progressive Cause Greater Than Any Individual"), and lodged in his chest.

Despite having A BULLET IN HIS CHEST, Roosevelt insisted on delivering his scheduled speech. As an experienced hunter, he correctly realized that since he wasn't coughing up blood, the bullet hadn't reached his lung and he could postpone a trip to the hospital until after his speech. He went off script and started his speech with, "Ladies and gentlemen, I don't know whether you fully understand that I have just been shot, but it takes more than that to kill a bull moose."

When he finally did receive medical attention, doctors determined that it would be less dangerous to leave the bullet in place than to remove it. He spent two weeks recovering, then Roosevelt told reporters, "I'm fit as a bull moose." The Progressive Party became known as the Bull Moose Party.
-------

We checked out of the hotel and headed south to O'Hare. You may be wondering why we flew home from Illinois instead of Wisconsin, as there's a perfectly good airport right there in Milwaukee. The main reason is that I absolutely hate layovers. I don't like flying as it is, but flying to somewhere that isn't my destination only to sit there for hours and then take ANOTHER flight - well, that's torture for me. I will do just about anything to get a nonstop flight and avoid that complete waste of time. By driving 60 miles to Chicago where there was a direct flight to Sacramento, we saved over four hours of layover time. And even better - it was cheaper flying home from O'Hare than from Milwaukee.
We had one stop to make on our drive from Milwaukee to Chicago. 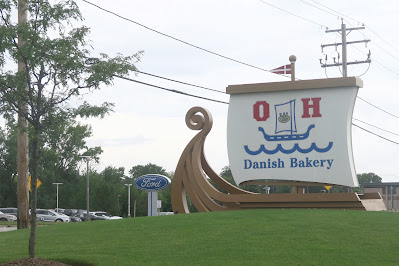 Racine, Wisconsin has a large Danish population. It has become known for its Danish pastries, particularly kringle, which is the official state pastry of Wisconsin. You know I couldn't pass up the chance to try the official state pastry and check it off my list. After a bunch of research, I picked O&H Danish Bakery for our kringle tasting.
There were a lot of delicious-sounding flavors of kringle for sale. 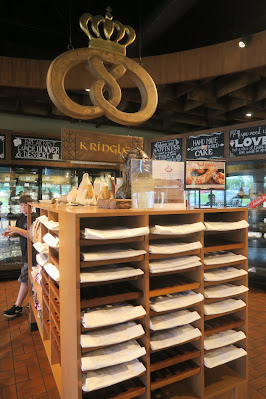 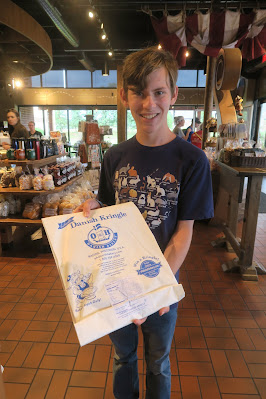 I had assumed that there would be individual slices of kringle for sale at the bakery counter. I figured we'd get three different flavored slices to share, but it turns out that kringle is only sold whole. A whole kringle weighs 1.5 pounds and none of us were interested in eating half a pound of pastry right then and there. Nor were we interested in carrying a pizza-sized pastry through security or on the plane.
So instead, I ordered a kringle to be delivered to the house. I sent one to our bunnysitter as well. I debated what flavor to get, but ultimately decided that 'Wisconsin' was the best choice. It arrived in less than 48 hours, fresh and securely packed. 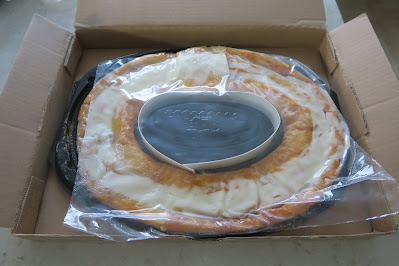 Choosing the Wisconsin was a great decision. The cream cheese, cherries, and cranberries tasted fantastic together. All deRosiers gave it two thumbs up. 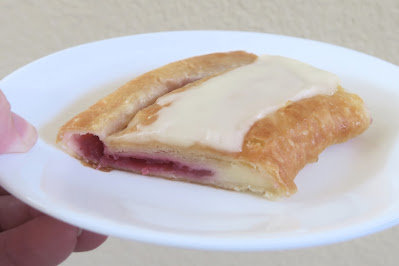 We came home from our trip with wonderful memories and lots of souvenirs, including one we definitely didn't want: COVID. We're finally healthy now, thankfully.
So what's next for the deRosiers, travel-wise? We have three more major trips to do and eight states to visit before June 2024 in order to accomplish our goal of taking Trevor to all 50 states before he's 18. And, of course, the remaining states are not the easy ones to visit, both in terms of accessibility (no non-stop flights to any of these states) or in terms of weather (winter break is not the best time for Californians who don't even own proper coats to visit New Hampshire or North Dakota). 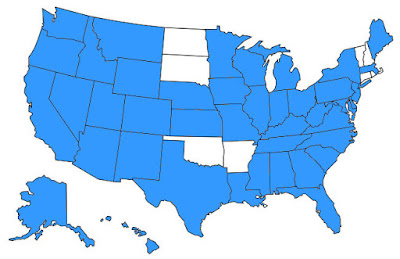 It's exciting to be getting so close to meeting our goal. When I look at the map nearly filled it, I have so many great memories of family fun and adventures together. Nothing better than that.
Email ThisBlogThis!Share to TwitterShare to FacebookShare to Pinterest
Labels: Steve, Trevor, US Travel, Wisconsin