Trevor's 16th birthday fell on a Tuesday during Finals Week, so our celebration was low-key. Donuts for breakfast, school, presents (including the money gift inspired by Guy's Grocery Games), dinner at a teppanyaki restaurant, and homemade grasshopper pie with a candle on it. It was exactly what he wanted. 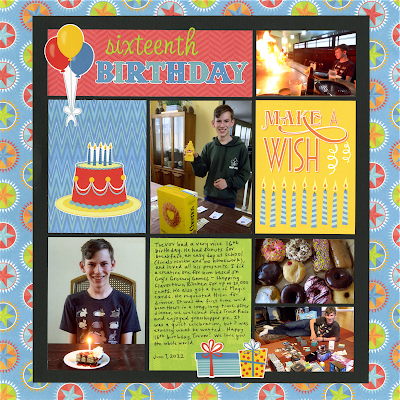 Sixteenth Birthday (affiliate link)
For the layout, I used five pictures and one collection kit. The layout came together very quickly since all the papers and embellishments were from a single line. I used a wide border on the black cardstock to help the photos and journaling stand out against the background paper, but now I'm wondering if it would look better if I'd used the same narrow borders there as between the photos. I'm not sure. Doesn't matter - it's in the album and it's time to move on to the next page.
Email ThisBlogThis!Share to TwitterShare to FacebookShare to Pinterest
Labels: birthday, Layouts, Trevor