As I mentioned previously, Trevor wants his birthday cake to be a zebra that stands up. I've also mentioned that I'm not very good at cake decorating. Trevor is a big fan of Ace of Cakes and therefore has no idea that mere mortals such as myself cannot make zebra cakes that stand up.

I've been doing some sketching in an attempt to design a cake that will: 1) make Trevor happy; 2) not require days and days of labor; and 3) not embarrass me. Bonus points if it tastes good (which means finding a way to do black zebra stripes that don't taste like bitter black food color). So far, I don't have a design that meets all goals. Fortunately, I have time.

I thought I'd share the birthday cakes from Trevor's first four birthdays. When he turned one, I chose a Very Hungry Caterpillar theme. I don't really remember how I made this cake. I think I used a bundt pan. I do remember that I lightly misted the green and red food color on top of white frosting rather than tinting the entire batch of frosting (thus avoiding the dreaded bitterness problem). The feet are Hershey's kisses. 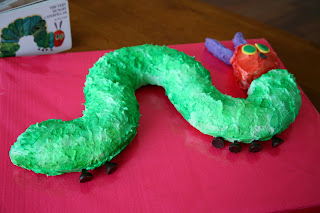 When Trevor turned two, we had a Cookie Monster theme. I carved a little bit off the top of a round cake, then put it off-center on a 9x13 cake that I frosted in white. I frosted the mouth area in black (bitter!), then used the 233 grass tip to pipe Cookie's blue fur. I cheated on the eyeballs, as they are not edible. They're ping pong balls with black dots drawn on with a sharpie. A big pile of cookies hid a frosting mistake. 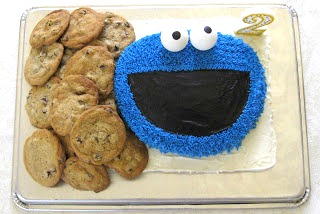 Trevor chose a Monster's Inc theme for his third birthday. I had grand illusions of doing a Mike cake and asked for a sports ball cake pan for my birthday. After I received it (thanks Jonna!), I tried it out by making a birthday cake for a friend. It was a huge fail (sorry Karl!). I abandoned the idea of making a round Mike cake and instead went with a furry Sulley-inspired 3. I shaped the 3 out of rice krispie treats. The Sulley is a plastic figurine (more cheating). 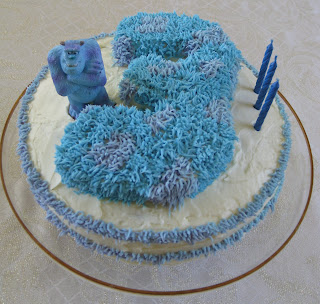 Last year, Trevor had a Maze Party. I'll blog about that in a separate post, as it was quite an event.  He wanted a cake with a maze on it that he could solve during the party. The cake was MUCH harder to make than it appears! The toughest part was designing a working maze to fit the cake, and then getting that maze accurately onto the cake. I used graph paper to design it, then used a ruler to press straight edges into the frosted cake to use as guidelines for piping. Not easy! I had to keep counting squares to make sure I didn't inadvertently create an unsolvable maze.

At the party, Trevor piped red frosting onto the cake to solve the maze. He was THRILLED with his cake. 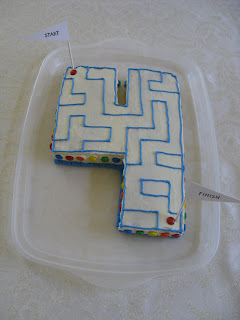 Oh, and Trevor just told me that he might want a giraffe cake instead of a zebra.  To be continued....
Email ThisBlogThis!Share to TwitterShare to FacebookShare to Pinterest
Labels: Cake, Parties