Recently, I blogged about the cakes I've made for Trevor's first four birthdays, including the Maze Cake.  Today I wanted to tell you more about the Maze Party.

First, you need to know that Trevor LOVES mazes.  When I asked Trevor what he wanted his fourth birthday party to be like, he said he wanted a Maze Party where everyone would do mazes and there would be a Maze Cake.  Hmm... what exactly does a maze party look like, and would Trevor have to face the sad reality that no one else in his world is as interested in mazes as he is?  I had to think hard to plan a party that would suit Trevor and not just be everyone sitting silently completing maze books.

For his family birthday BBQ, Steve and I turned the backyard into a giant maze.  Guests were greeted with an arrow on the garage showing them where to go. 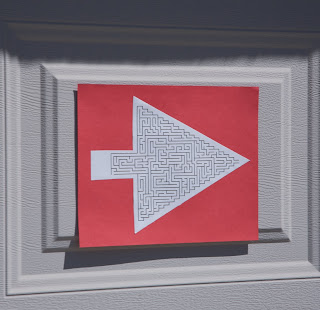 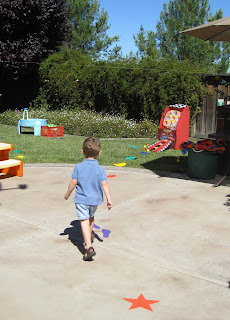 Three of the stations included wooden mazes that Steve made. 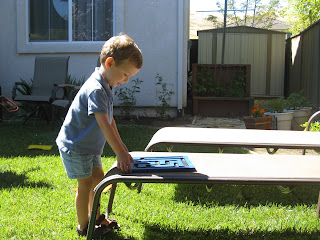 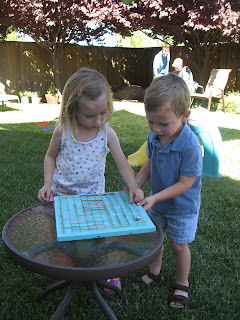 There was a large banner with mazes for Trevor and his guests to solve. 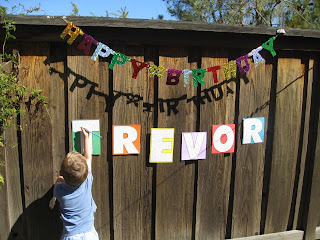 I planned a huge maze treasure hunt.  Each clue was sealed in an envelope with a maze printed on the outside.  The kids had to solve the maze before opening the envelope to find the next clue.  Each maze was increasingly difficult. 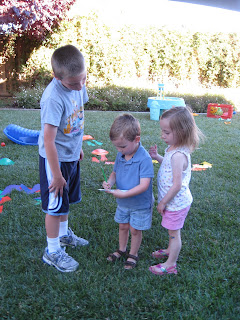 The clues eventually led them inside the house, where maze-themed prizes with their initials were waiting for them. 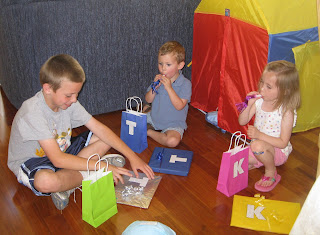 They also got an empty treat bag with their initials.  While they were inside finding the treasure, a few of the adults were hiding candy in the backyard.  Unfortunately, I didn't get any decent pictures of the candy hunt.

The highlight of the Maze Party was, of course, the Maze Cake.  Trevor loved it. 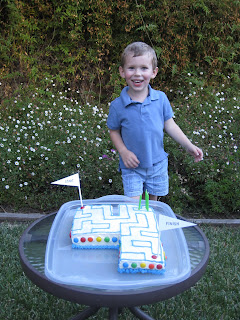 The Maze Party was a huge success!

Two days later on his actual birthday, we hosted playgroup at our neighborhood park.  We called this event the Park Party.  For the Park Party, we planned an extremely simplified version of the Maze Party.  With 20 kids coming, we opted for Maze Cupcakes instead of a Maze Cake. 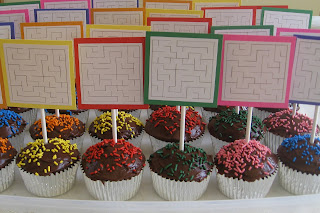 Trevor and I made treat bags for all his guests.  He carefully selected who got each color. 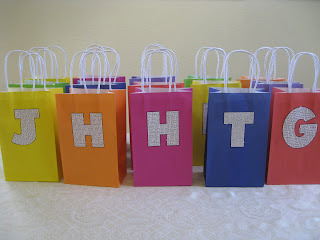 The treat bags each held a wooden maze and some pens, plus plenty of room for anything the kids found during the candy hunt. 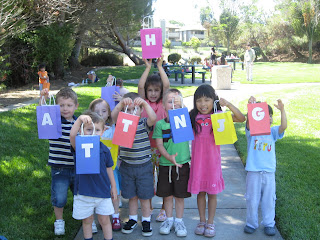 Both the Maze Party and the Park Party were tons of fun.  Trevor loved them, which is ultimately what matters most to me.
Email ThisBlogThis!Share to TwitterShare to FacebookShare to Pinterest
Labels: Cake, Parties