For the last 20+ years, I've been tearing interesting recipes out of magazines, filing them by category, and never looking at them again.  A few weeks ago, I went through my huge stash of recipes.  I found plenty that no longer interest me, have ingredients my family can't/won't eat, or were very similar to something I already make.  Into the recycling bin they went.

I also found a bunch that were just as interesting and exciting to me as when I first tore them out.  I've moved these out of the files and close to the grocery list.  I'm systematically cooking my way through them.  As I make each one, it'll go into my 'Favorites' folder or the recycling bin.

One of the first I tried was a corn chowder.  I've made many corn chowders over the years, but I've never tried one that calls for boiling the corn cobs in water to create the broth.  I was intrigued.  Could corn cobs create a tasty broth?  Answer: Yes! 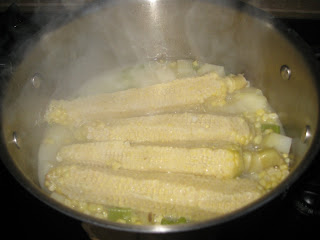