Battle of the Cupcake Champs

Each year on our anniversary, Steve and I do a 24-hour visit to a nearby city. We do a lot of walking and exploring. We eat at nice restaurants. It's always wonderful.

For our 8th wedding anniversary last Wednesday, we traveled to the city of Napa. It's very close to home, so although we've been to Napa dozens of times, we hadn't spent time just wandering and exploring. We stayed at The Inn on First (which I highly recommend). It was an easy walk to everywhere in downtown Napa. Including here: 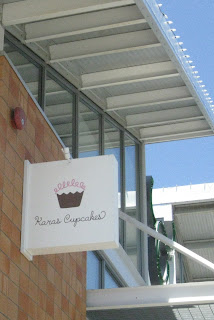 Despite my great affinity for desserts, I've never tried Kara's Cupcakes. We enjoyed watching Kara compete on Cupcake Wars and I was dying to try their cupcakes.

There is a second Cupcake Wars winner in Napa- Sift Cupcake and Dessert Bar. I got it in my head that it would be really fun to get similar cupcakes from each bakery and do a side-by-side taste test. Steve, ever supportive of my ideas, agreed. We walked to Kara's. So many wonderful choices! With no clue what cupcakes would be available at Sift, we bought four at Kara's that we thought might be common enough that they'd also be at Sift: Peanut Butter Chocolate Ganache, Meyer Lemony Lemon, Raspberry Dazzle, and Fleur de Sel ($3.25 each). We walked back to the car, then drove the 5 minutes or so up the highway to Sift. 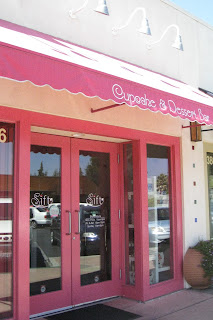 There was one lone Limonatta cupcake - with its meyer lemon buttercream, it would be a perfect matchup to Kara's Meyer Lemony Lemon. The Peanut Butter Ripple (chocolate cake, peanut butter frosting) seemed like it could go head-to-head with Kara's Peanut Butter Chocolate Ganache. Unfortunately, Sift didn't have a raspberry or a fleur de sel, nor anything similar enough to do a third match-up. They did, however, have an intriguing cupcake called Stud Muffin, which we bought. Sift's cupcakes were $3 each.

We headed to our hotel room with 7 cupcakes. We put 5 cupcakes away, with plans to share them with Trevor and my mom (who stayed with Trevor while we were gone). We readied ourselves for the Battle of the Meyer Lemon Cupcakes. 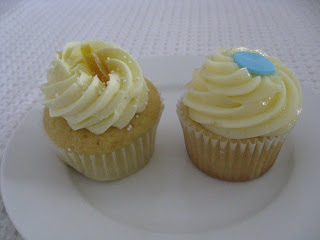 
Sift earned the point for appearance. It looked more inviting with its sprinkles and lemon candy decoration. Kara's was inexplicably decorated with a blue circle that looked like someone had dropped a Necco wafter on it as they passed by.

Then we tasted each. First the cake alone, then the filling, then the frosting, then all together. On all counts, Kara's was better. Much better. Hands down, no contest better. Night and day. The buttercream was smooth and flavorful, the cake moist and soft, the filling intense and smooth. Steve and I conferred. Both judges agreed: the win goes to Kara's.

At home, we prepared for the Peanut Butter Chocolate Battle. This time there would be four judges. I carefully cut each cupcake into fourths. 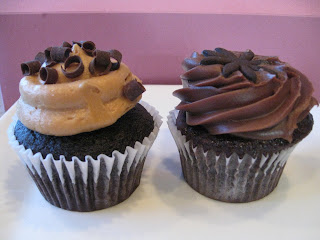 Once again, we felt like appearance went to Sift. We liked Sift's chocolate curl decorations more than Kara's brown flower plopped on top. We carefully tasted cake and frosting. The frostings were completely different, yet both delicious. As for the cake itself, we all felt that Kara's won by a mile. So the win went to Kara's, but it was much closer than with the lemon cupcakes.

For the final wildcard round (with three judges this time, as Grandma had gone home), we tasted the two remaining cupcakes from Kara's and the one from Sift. 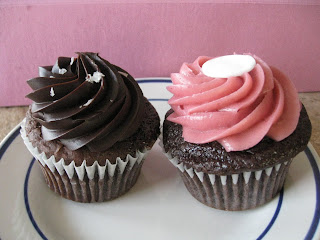 
As usual, we weren't wowed by Kara's decorations. There was another strange Necco-disc that landed on the raspberry cupcake and added absolutely nothing. But the taste of both was pretty good. The cakes were moist and flavorful and the fillings were tasty. The frostings were buttery and creamy and rich.   would have preferred a stronger raspberry flavor in the frosting, but the filling was really bold and delicious.

Which brings us to the final cupcake, the Stud Muffin from Sift. Their menu describes it as a brown sugar beer cake with salted caramel frosting and cayenne dusted bacon on top. 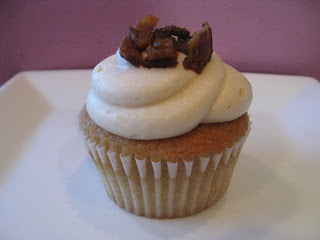 
First, the good news. The frosting was tasty. It had a strong flavor that reminded me of the glaze on maple donuts. It was a little gritty, but not bad. As for the rest of the cupcake, Trevor and I both felt the bacon was inedible because of the cayenne 'dusted' (dumped?) on top. Steve thought it was tolerable. But the cake... I can say with confidence that it is the single worst cake I've ever eaten. It was gummy and clumpy, sour and off-putting. I feel a bit bad judging them poorly on a single visit, as they obviously make good enough cupcakes to have won on Cupcake Wars, but this cupcake was bad enough that I don't intend to go back.

So, it was a clean sweep for Kara's. We did like two of the three frostings from Sift, but we disliked all three of the cakes themselves. So the next time we're buying cupcakes in Napa, it will be from Kara's. Have any of you tried either bakery? What was your experience?
Email ThisBlogThis!Share to TwitterShare to FacebookShare to Pinterest