We had so much fun making and racing Pinewood Derby cars last year that we decided to do it again.  (Click here to see last year's nifty watermelon car.) Here's what I came up with this time. 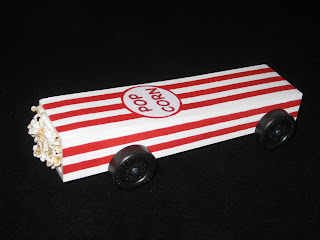 This year, we worked on our cars in my dad's awesome workshop.  He has every tool imaginable, which made the process so much easier than last year.  I cut my car into a gentle wedge.  Then I used the drill press to drill a bunch of holes on one end, then chisled out the excess wood to create a hole to hold my popcorn.  We did the painting and finishing at home. Here's how it looked after I painted the stripes. 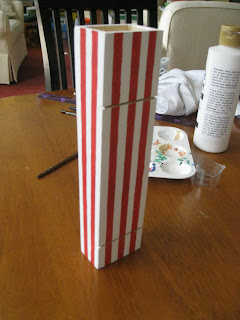 I printed the words Pop Corn in red, then punched out a circle around it.  I adhered that to the car with Mod Podge.  I put a large puddle of glue at the top of the popcorn box, then dropped Mini Pops (made from sorghum, not corn) inside. When the glue was dry, I sprayed the Mini Pops with clear acrylic sealant. 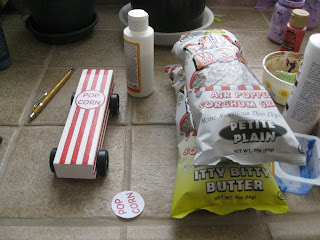 This year Trevor was old enough to enter.  He decided to make an Angry Birds car.  Grandpa showed him how to drill holes, then they glued dowels into the holes.  Trevor painted the car blue. 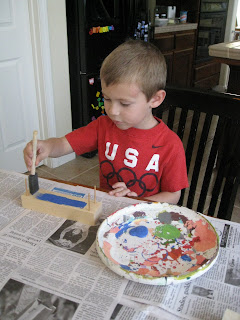 He drew and cut out Angry Birds characters, then Mod Podged them to the car.  He decorated a cardstock awning as well. 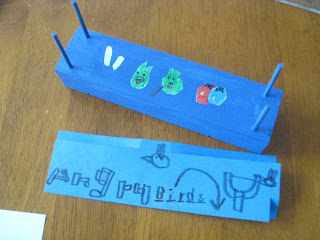 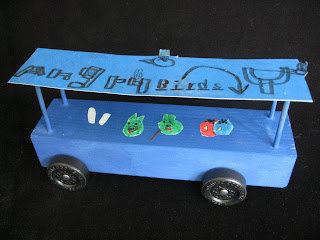 Steve finished his at the last second, so I didn't get a picture of his before he had to turn it in.

Finally, the Big Day arrived!  Before they ever race, the cars are judged on creativity, workmanship, functionality, etc.  I got first place amongst the women! 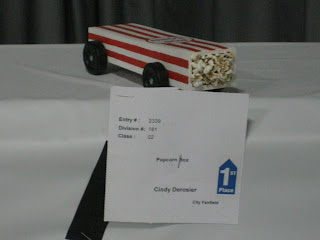 It was great fun seeing the other cars and how creative some of them were.  I really liked this Ho-Ho.  Only after I checked the tag did I see it was made by my very talented nephew Timothy. 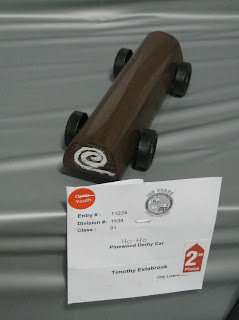 When it came time for the races, they divided all the cars into two groups.  The females raced first.  My car did not fare very well.  Here it is zipping by in third place, which was actually one of its better finishes.  The races are done double-elimination and I was out by my 4th race.  Oh well!  I was going for looks over speed anyway. 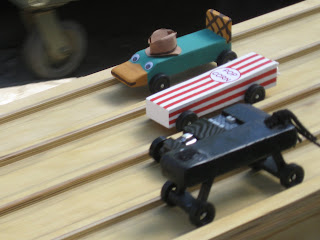 Once the women's races were over, it was time for the males.  All of the males' cars competed against one another, which meant that my husband, six-year old Trevor, 11-year old Timothy, and my dad all had cars in the race.  Here's Trevor, excitedly watching to see how his car would place in its first race.  (Notice the blue lips from the shave ice he'd just finished....) 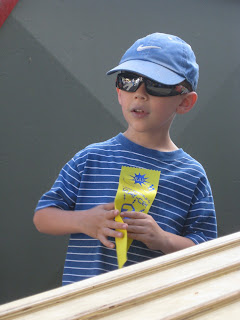 All four of the guys did better than I did, as none of them were eliminated as early in the competition as my car. Trevor and my dad were out fairly early, then Timothy. Steve's car did the best. His is the sleek orange car zipping by in 2nd place. That's my mom, Timothy, and Trevor looking on. 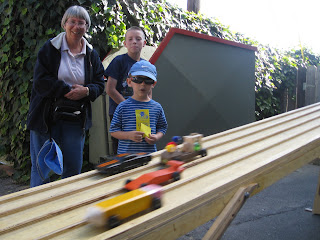 Eventually Steve was eliminated too.  But no matter!  We had so much fun designing, building, and racing our Pinewood Derby cars.  Can't wait til next year!
Email ThisBlogThis!Share to TwitterShare to FacebookShare to Pinterest
Labels: County Fair, Pinewood Derby