I've read a lot of blog posts recently about the importance of Keeping It Real.  Apparently, some people feel bad because there are bloggers who paint a picture of themselves as Supermoms who do it all, perfectly and beautifully.  That hasn't been my experience.  I read A LOT of blogs and find that the overwhelming majority (including myself) share not only the good, but also the bad and the ugly.  (Believe me, I have shared plenty of bad and quite a bit of ugly.)  Today I will be Keeping It Real by sharing my latest recipe failure.

I love making up recipes.  Those of you who have been reading my blog for awhile might remember I spent a month last summer making up recipes using peaches and nectarines (Maple Glazed Nectarines, Peach Muffins, Nectarine Vodka cocktails, etc.).  I invented some soups this winter (like this Rice Chowder) and now that fair season is near it's time for my annual attempt to invent something that will win first prize.  (Spoiler alert: I will NOT be winning first prize with this recipe.)

I was very interested in a Mystery Cookie competition.  Basically, you make up a recipe and turn in the cookies and the best one wins.  There is a list of 8 ingredients that you MUST use, plus another list from which you must choose 2 or more.  You can't use anything that isn't on either list.  At first glance, this seemed easy- flour, sugar, eggs, butter, salt, baking soda, chocolate chips, ... perfectly normal cookie things were on both lists.  I gathered ingredients and my trusty assistant. 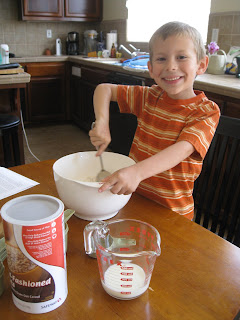 As we baked, I took careful note of what I added and how much.  The only tricky-for-me ingredient was milk, which I don't normally put in cookies.  I'd already planned to add oats as one of my bonus ingredients, so I was hoping the extra liquid from the milk would be absorbed by the oats.  I split the dough in fourths and added different ingredients to each. The completed doughs looked and felt good. 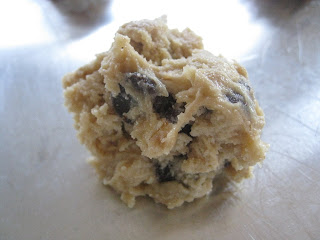 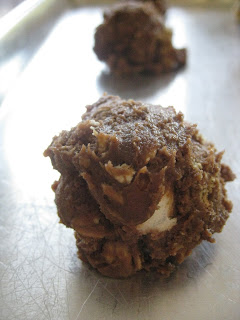 
When the first batch came out of the oven, it was painfully obvious my recipe was a flop.  The edges were crisp and dark while the centers were underdone.  The cookies had spread way too much and had no structural integrity whatsoever. 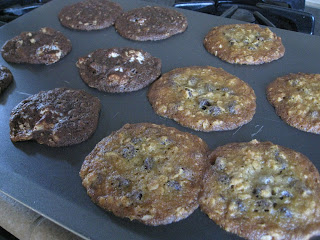 Undaunted, I tried a different pan.  That can make quite a difference.  It was even worse!  Check out the raw centers.  Plus now they were completely stuck to the pan. 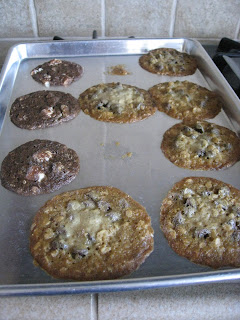 Perhaps if I use muffin tins they'll bake more evenly and won't spread so much? 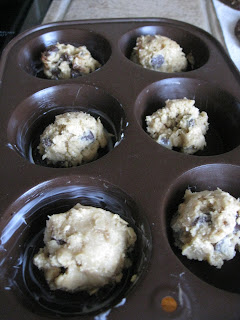 Yes... they did bake more evenly and they didn't spread.  Instead, they rose like souffles then sank.  I had to pry them out and they crumbled into chunks. 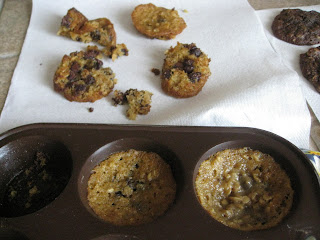 Maybe a Silpat?  Slightly better... at least they didn't stick. 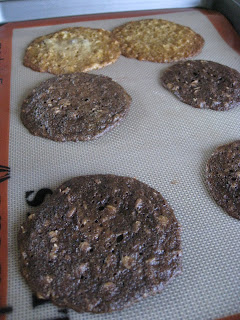 What was frustrating is that the cookies were absolutely delicious.  Taste = A+.  Texture and appearance = a generous D-.  Clearly not a first place winner.

I have a lot of ideas about what went wrong and how I can fix it during future attempts.  But I won't be entering these in the fair.  As it turns out, I have a conflict and can't deliver them on the proper day.  Oh well.

So what did I do with the failed crumbly cookies?  I folded them into homemade vanilla ice cream. 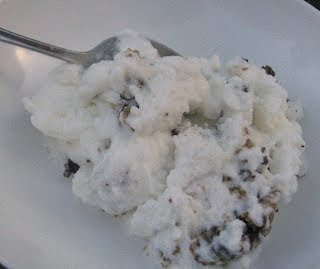