In addition to the three minifig-themed games, we had three other games at Trevor's Lego party.  The first was Lego Trivia.  Using a Lego-inspired font, I made signs with the letters A, B, C and D. 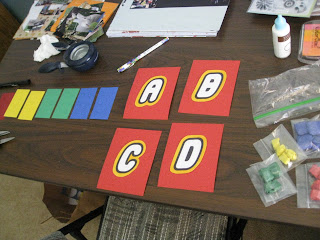 I put each sign on a stake and put them in different parts of the yard.  Each question was multiple choice with four possible answers.  For example:

After each question, the guests had to stand by the letter they thought was correct.  Everyone who got the answer right earned one brick.  After 12 questions, whoever had the most LEGO bricks won.  I did have a tie-breaker question ready, but we didn't need it.  Steve got 7 of the 12 answers right and won the game.

By the way, the answer to the sample question is 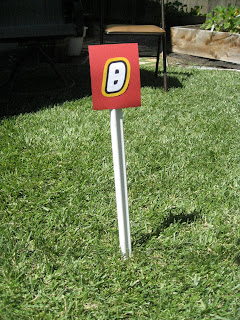 If you'd like a copy of my trivia game, just leave me your email address in the comments and I'll send you the file.  :)

Next was a treasure hunt.  There were four kids at this family party, so I bought 4 minifigs (used, off Ebay- much cheaper than buying new, even with shipping) 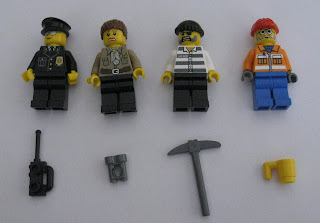 I took them apart, putting heads in one pile, hair/hats in another, etc. 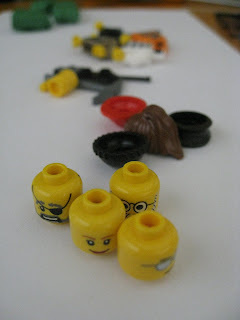 Then I wrapped each pile of items in a different color of tissue paper (heads in red, and torsos in blue, for example) and set them aside.

I wrote clues on Lego-shaped cards. 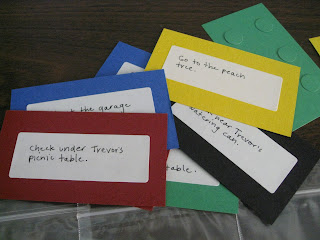 Then I got 5 letters to spell out the word TRAIN.  At each stop along the hunt, the kids would find either a bag of minifig parts or a secret letter. 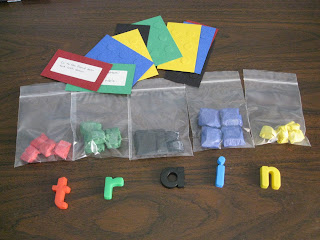 The last clue told them to unscramble the mystery letters and go to Trevor's _ _ _ _ _ table to find the treasure.  Once they found the treasure and all the bags of minifig parts, they opened them to see what they got.

Here they are at the start of the treasure hunt.  Zoom! 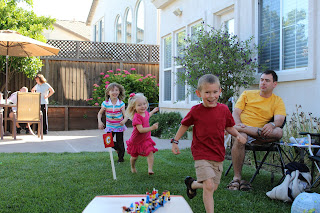 The final game was a simple 'Guess How Many Legos in the Jar' game. 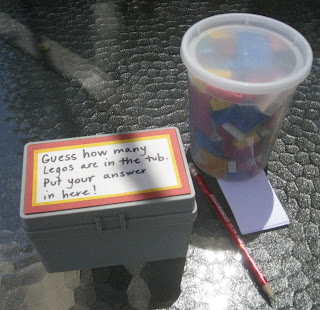 Trevor read each guess out loud (which was great practice, as he isn't 100% confident with reading 3 digit numbers yet).  The guesses ranged from 1 (that guess came from the 2 year old) to 450.  The correct answer was 151.  Grandma missed it by only one! 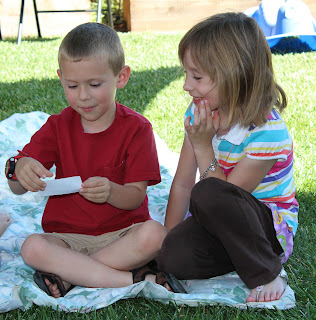 There were a few other Lego touches at the party.  Trevor and I made Lego goodie bags for each person.  And Trevor designed this container to hold the forks. 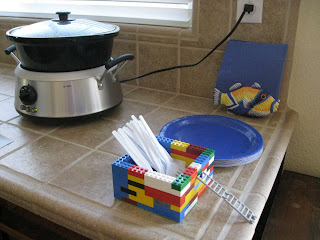 He was so excited to show his guests how the forks could climb up the ladder and then go down a set of stairs to get into the container.  I love when he thinks up things like this.  I NEVER would have thought to make a way for the forks to climb in and out of a container.  (By the way, I sterilized the container before adding the forks.)

That wraps up the Lego party fun!  I can't wait to find out what he wants for next year's party.  So far, he's mentioned Angry Birds, Bunnies, Mythbusters, Chemistry, and Camping as possible themes.  Stay tuned!
Email ThisBlogThis!Share to TwitterShare to FacebookShare to Pinterest
Labels: LEGO, Parties