I've shown you Trevor's Lego cake and Lego pinata- time for games! Of the six games we did, three of them were based on Lego minifigs. For the first, I printed out a big stack of blank minifigs (I used the image here). As the guests arrived, we asked them to color their own minifig and then display it. Some of us, including me, colored our minifig with what we were wearing that day... 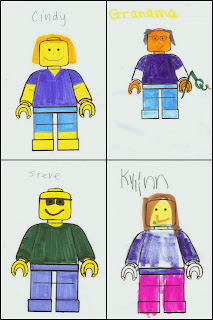 ... while others created fictional characters. 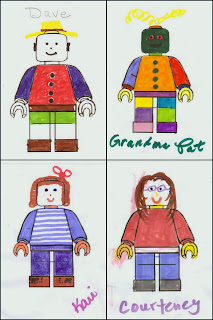 There was a lot of creativity. My dad made a Birthday Trevor minifig (labeled Grandpa Dave of Livermore because both of Trevor's grandpas are named Dave). Jonna drew what she thought she would have drawn at age 6. Timothy blew us away with the Homer Simpson minifig. Joe's minifig is awesome because there was nobody at the party named Joe. 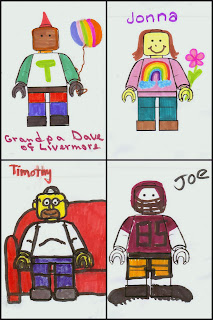 We're suspicious that "Joe" might be Uncle Brian, who is incredibly creative. Check out his minifig. It's Trevor, wearing Lightning McQueen jammies and holding his giraffe stuffed animal. 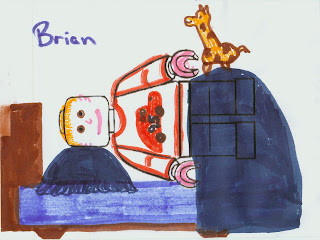 Trevor thought this was so much fun that he made four. Basically, every time another family or set of guests arrived, Trevor made another minifig to show them what to do. 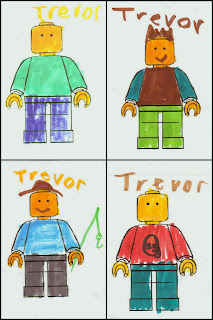 We displayed them all on the door. 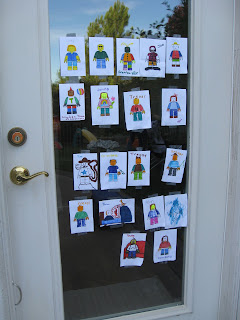 The second game was Minifig Memory. I had made a display of 28 of Trevor's minifigs, which sat out as a decoration during the first half of the party. Then I announced that it wasn't merely decoration- it was a memory game. I covered the minifigs and the guests worked in teams to try to remember as many of the minifigs as they could. Challenging! 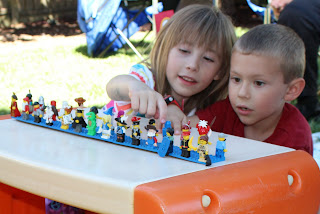 The third minifig game was "Pin the Accessory on the Minifig."  We started out with this blank minifig. 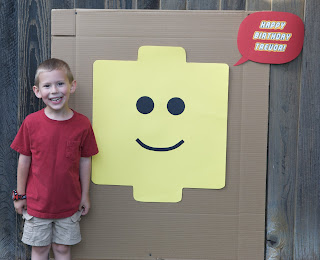 Each guest had to pin a different feature or accessory on the minifig. Here's Steve with a ballcap. 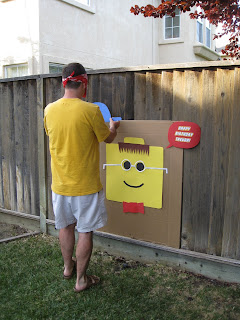 After each person pinned their feature and got to see where it ended up, Trevor would rush over and fix it so that the minifig was 'correct.'  When the game was over, our minifig looked like this. 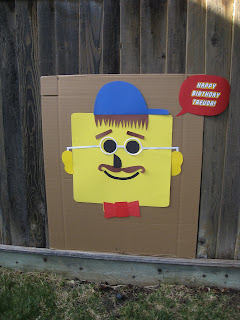 To make your own "Pin the Accessory on the Minifig" game, you need yellow posterboard, construction paper for the accessories, scissors, and a black Sharpie. To play, you need somewhere to hang the minifig (ours is on a piece of cardboard that we taped to our fence), a blindfold, and painter's tape.

Make the minifig's head by keeping the posterboard its full width, but cutting down the top and bottom of the length to make the top and bottom studs. With a black Sharpie, color in two eyes and a smile in the center of the face. Now use the yellow posterboard scraps to cut ears. Use the construction paper to cut other accessories until you have at least as many as there are guests at the party. In addition to the ears, we made a blue hat, brown hair, brown eyebrows, white glasses, a black nose, a brown mustache, and a red bowtie. (We also made a Happy Birthday Trevor speech bubble that was up before the game began.)

To play, put loops of painter's tape on the backs of each accessory. One at a time, guests put on the blindfold and try to pin (tape, actually) the accessory in the correct place. Fun!


Tomorrow I'll share the other three Lego games from the party!