My sister Kari just celebrated her 37th birthday. About 5 years ago, she announced that she has too much stuff and would prefer that any gifts she's given are consumable (no more knick-knacks or things that take up space). Since I feel the same way, I was happy to comply.

About 5 months ago during a random visit to Cost Plus, I noticed Bosco. If you're a Seinfeld fan, you'll know that Bosco features prominently in an episode. Kari is the world's biggest Seinfeld fan, so I bought the Bosco. It would be a fun addition to whatever I'd be giving her for her birthday. Then I realized I could build a whole gift around food items that have inspired Seinfeld episodes. And I could challenge her to tell the plot of every item in the bag! Fun!

Here's what I got her: 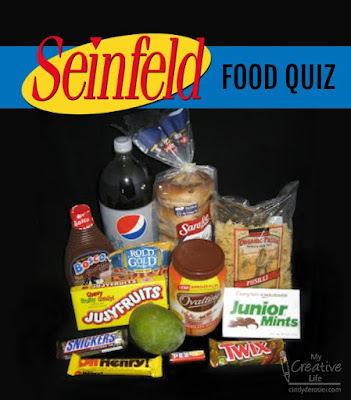 As she removed each item, she had to tell us the plot of the episode. She breezed through all of them except the Snickers, Pepsi, and Twix. I had to give her hints for those ones. 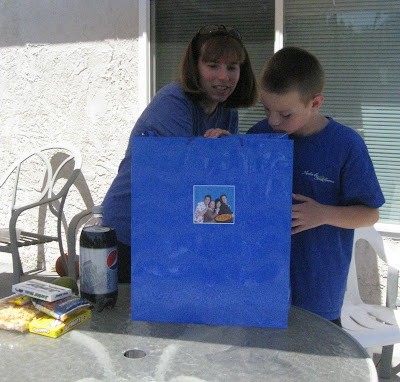 If you're a Seinfeld fan, see how you would do!


Here are the answers. I've added affiliate links in case you'd like to buy these to give to the Seinfeld fan in your life!

1) Bosco
“The Secret Code” (episode 117): George reveals to Mrs. Peterman's dying mother that his ATM code is Bosco. He later needs to reveal his ATM code to save a man who is trapped.

2) Cinnamon raisin bagels
“The Strike” (episode 166): Kramer returns to work at a bagel shop after 12 years on strike. This explains why he's never held a job.

4) Jujyfruit
“The Opposite” (episode 86): Elaine's boyfriend Jake is in an accident and she stops to buy Jujyfruits at the movie concession stand before heading to the hospital.

“The Junior Mint” (episode 60): Kramer drops a Junior Mint into the open chest cavity of Elaine's ex-boyfriend Roy during his splenectomy surgery.

6) Mango
“The Mango” (episode 65): After eating a bad peach and insulting the store owner, Kramer gets banned from the shop. Jerry gets banned too. George ends up buying their fruit and discovering that mangoes cure his sexual dysfunction.

7) Oh Henry!
“The Caddy” (episode 122): Elaine runs into Sue Ellen Mischke, an acquaintance from high school who is an heiress to the Oh Henry! candy bar fortune and a 'braless wonder.'

8) Ovaltine
“The Fatigues” (episode 140): Kenny Bania has a comedy bit about Ovaltine (“Why do they call it Ovaltine? The jar is round; the mug is round. They should call it Roundtine.”) His notes get mixed up with George's presentation on risk management. George ends up speaking about Ovaltine at a board meeting.

9) Pepsi
“The Dinner Party” (episode 77): The group is headed to a dinner party and Elaine wants to bring wine and cake. George prefers to bring Ring Dings and Pepsi.

11) Pretzels
“The Alternate Side” (episode 28): Kramer gets a line in a Woody Allen film, “These pretzels are making me thirsty!”

12) Snickers
“The Pledge Drive” (episode 89): Elaine's boss Mr. Pitt eats a Snickers bar with a fork and knife, which sets off a citywide trend.

13) Twix
“The Dealership” (episode 167): George buys a Twix from a vending machine at Puddy's car dealership, but the Twix fails to fall. He ends up making a candybar lineup, made entirely of Twix, to prove that a mechanic stole the dangling Twix.


How many did you get right?