Each January and July, the major players in the craft industry attend the Craft and Hobby Association (CHA) tradeshow. (I was lucky enough to attend in January 2011.) For those of us who don't go to CHA, the Fiskateers always throw a big online crop. This summer's event was called the CHA CHAllenge CHAsers, or CCC for short. We Fiskateers were challenged to complete 16 projects, in addition to participating in a variety of games. (One had us writing a poem about our favorite Fiskars supplies! Difficult!) Being a pathological overachiever, I always try to complete all the challenges.

The "Recycle Me" challenge asked us to turn trash into treasure. That was an easy one for me, as I keep a pile of 'trash' items that have potential in the corner of my craftroom. All I had to do was choose one. I dug out an empty hot chocolate container, removed the label, and wrapped it with coordinating patterned papers. I added borders and my initial. I think it's pretty cute! 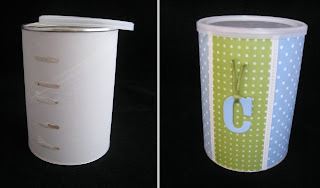 The "Go Ahead and Borrow an Idea" challenge sent us to our friends list. We had to go to the 7th friend on our list and scraplift something from their gallery. My 7th friend was the awesome Cheryl Waters, who just ended 6 years as Lead Fiskateer. Since I've seen all the things she's posted during the time I've been a Fiskateer, I went WAAAAY back in her gallery to before I joined. I chose napkin rings that she made using a border punch. Here is Cheryl's project (posted with permission, of course!) 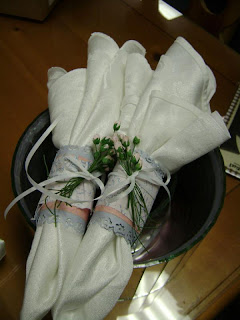 This is what my version looked like on the table. 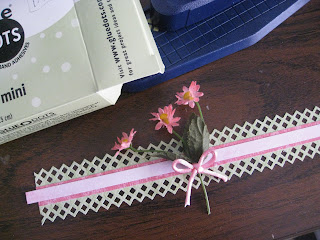 And here's how it looked on a napkin.  Cheryl's style is about as different from mine as you can get, so I really challenged myself to stay true to her inspiration piece.  I even folded my napkin the same way she did.  :) 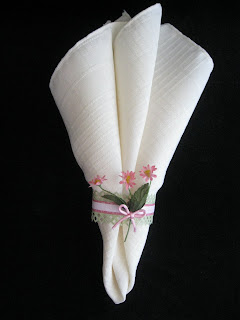 The "Beautiful Backgrounds" challenge had us get out our mists and play. I spritzed orange and yellow on white cardstock, backed it with orange, then used that same orange to make candles. The flames are coated in Stickles. I liked the card up until the point when I added the sentiment.  I think it looks like a tiny cake with oversized candles, as opposed to candles with a sentiment over them. Oh well! 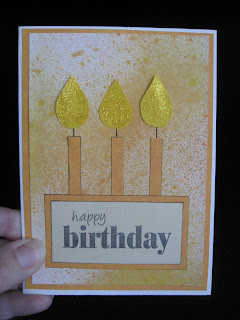 The "Think Outside the Box" challenge was a struggle for me. It shouldn't have been. The directions were simple- alter a box. I found a cool box in my 'trash' pile that I've been wanting to alter. 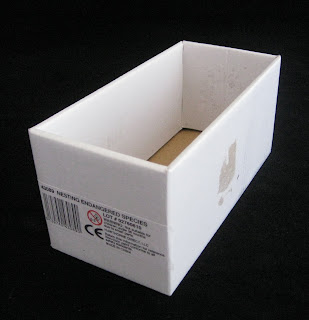 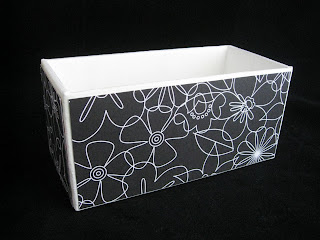 The "You Spin Me Round and Round" challenge asked us to make anything with circles. I started by punching out a circle and using temporary adhesive to stick it to my cardstock. Then I stamped blue circles on the card. 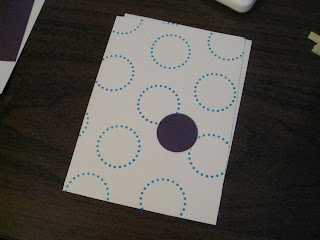 I added purple and green circles until the card was covered. 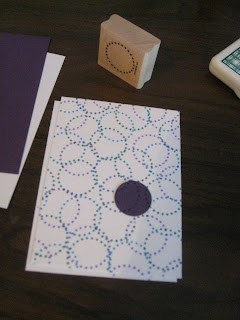 I removed the purple circle, then laid the strip I'd punched it from over the top of the card. 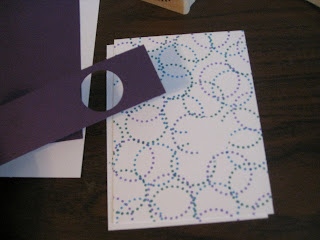 I added a rub-on to the empty spot, then backed the card with purple and attached it to the card base. I really like how this one turned out! 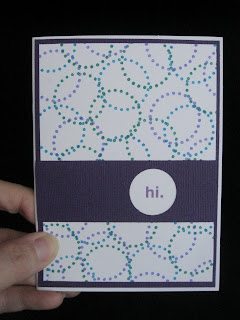 Tomorrow I'll share more of the projects I made during the CCC event.
Email ThisBlogThis!Share to TwitterShare to FacebookShare to Pinterest
Labels: Cards, Fiskateers, Home Decor, Trash to Treasure, Tutorials