I've been stalking the Mythbusters website every single day to check their schedule to find out when our episode is going to air. They only post the schedule 1-2 weeks out. So far, our episode isn't scheduled. It's really hard waiting!

Someone asked me the other day if I knew when my film debut would be, referring to the Mythbusters episode. Her question made me realize that I've never shared my ACTUAL film debut here on the blog. You see, back in 1998, I starred in an instructional video for the FOSS (Full Option Science System) Landforms module, produced by the Lawrence Hall of Science (LHS). 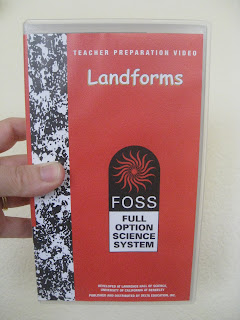 At the time, I was teaching 5th grade in Vallejo, CA, about 30 minutes from Berkeley, home of the Lawrence Hall of Science. I'd been involved with curriculum development with them in the past (more on that in a future post). They were looking for a school in which to film their instructional videos and ours was a perfect fit.

After a fairly long process of forms, permission slips, and other legalities, it was time for filming. Filming took five days. Before each session, I met production assistants in the bathroom to get taped up with a wireless mic. Then we went over what I'd be teaching. The kids were coached in how to behave (don't stare at the camera, don't sharpen a pencil or make off-camera noise, and act normally).

Neither Steve nor Trevor had ever watched the video, so I turned it on the other day. What a blast from the past! It was so fun seeing my 26-year-old self back in my classroom! I snapped a few pictures as we watched: 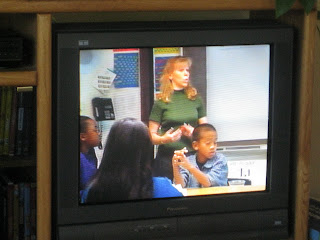 This next picture cracks me up, because you can see that the bulletin board behind me shows what we were ACTUALLY studying in science at the time (the Solar System) and not the Landforms module that we were pretending to be in the middle of during the filming. Don't get me wrong- I was actually teaching during the filming and the kids did all the proper procedures, assessments, etc. But we were in the middle of our Solar System unit when we dropped everything to do the filming. 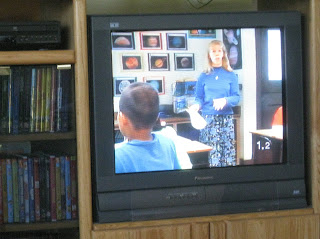 On the third day of filming, I woke up with a 102 degree fever. I was absolutely miserable, but knew that The Show Must Go On. When the production assistants touched my skin to tape my wireless mic, they commented that I was burning up. Yeah, no kidding! Amazingly, looking back at the video, I can't tell that I was sick that day even though I remember it vividly. 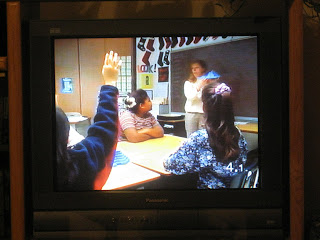 My favorite teaching tool, an overhead projector. I'm kind of sad that they aren't in many classrooms anymore. 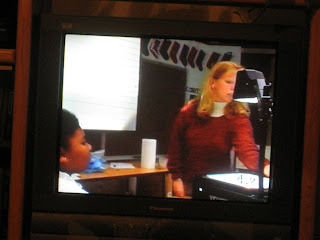 Check out what's behind my head: stockings that the kids sewed. We filmed in December. 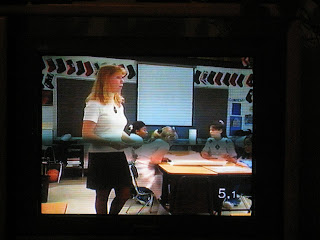 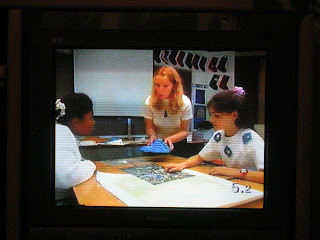 And here are the credits. My friend Marcia (who I thanked here on the blog on Teacher Appreciation Day) did Investigations 2 and 3 (I did 1, 4 and 5). 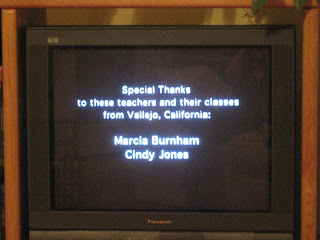 After the video was produced, LHS gave each of us a copy and invited us to a wonderful evening reception at their facility. They are high up in the Berkeley hills with a stunning view of the Bay. It was truly a fantastic evening.

When I looked up the LHS FOSS kits to link them to this post, I found out that their instructional videos are now online. You can watch me here:

I'd recommend Investigation 5. Trevor and Steve both especially enjoyed that part. Trevor really wants to do something like this at home. Fortunately, I'm well-qualified to teach him how.  :)
Posted by Cindy deRosier at 5:00 AM