Growing up, aloe vera was something I put on my skin to soothe sunburns. I got burned a lot, despite my best efforts not to. Anyway, in my mind, aloe vera is a lotion, not a beverage. So I had to buy some and try it as part of my 43 New-to-Me project.

I think this was the hardest to rate of all the new-to-me foods so far. The taste was actually pretty good, but the gelatinous texture was so off-putting that I had great difficulty finishing my small sample. Like kombucha, the aloe vera drink is something I'd drink again... but only if I filtered it first. I gave the aloe vera a 4. My friends didn't mind the gross texture, rating it 6, 8, and 10. Trevor agreed with me. ("It tastes good, but why is it so gloppy?"). Steve declined a taste. 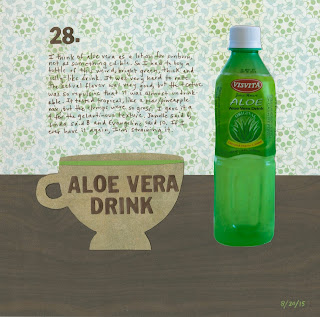 I had some fun scrapping this page. I'd served the samples to my friends in tiny little teacups, so I decided to cut one out to hold my title. It's completely out of proportion with the bottle of aloe vera drink, but I like it. I've never tried to cut a teacup free-hand before. The handle is a little lopsided, but I was happy enough with my first attempt that I stuck it to the page. In retrospect, I should have followed the Rule of Thirds and used a smaller strip of woodgrain to balance the layout better. Oh well. It's been enjoyable trying new things for this album and not really caring how each page turns out.
Email ThisBlogThis!Share to TwitterShare to FacebookShare to Pinterest
Labels: 43 New-to-Me, Layouts