County fair season has come and gone, so it's time for my annual fair wrap-up!

I'll start with Trevor. He entered 55 craft projects, 10 fine arts projects, his Pinewood Derby car, a tablesetting contest and a collection in two different fairs. Some of his entries were judged Danish, where each person is compared to a rubric and, in theory, everyone (or no one) could get 1st place. Other entries were judged American, where there is one 1st, one 2nd, and one 3rd place winner. He did very, very well.

Rather than show his many projects I've already shared here, I'll show two of the projects he made at school. Blue ribbons for both. 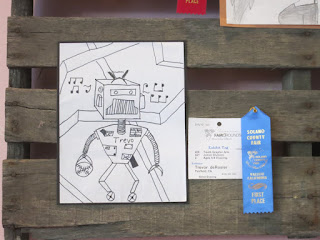 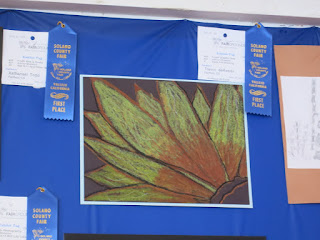 In all, Trevor got a Judge's Favorite for his Pinewood Derby car, 1st place in the live tablesetting contest and 1st for his collection. His remaining sixty-five items earned forty-three 1st place ribbons, seven 2nd place, and one 3rd. He earned just under $200 in premium money, in addition to the free fair tickets for entering.

Like Trevor, I entered items in two different fairs. Because I'm a fair judge, I'm very limited in what I can enter. Obviously, I can't enter categories I judge, so I usually stick with baked goods. This year, I wasn't able to enter baked goods at one fair because we were in Idaho during the delivery window. I entered a handful of craft projects that were far outside my judging areas (like the shoebox float, for example), along with the Follow That Recipe Contest, and a collection. All of my entries were judged American.

I did OK, earning a few 1st place ribbons, a handful of 2nds and a 3rd. Here's my self-portrait. It placed 2nd in its category. I was happy with that. 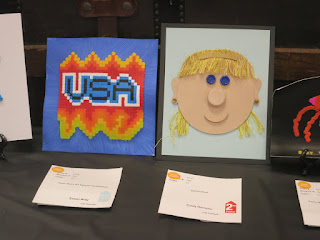 I earned significantly less money than Trevor did, but it was still a nice bit of pocket change. It probably covered all the tasty fair food we enjoyed during our multiple visits!

As much as I love finding the items we entered at the fair, I love seeing what others have entered just as much. There is so much talent and creativity out there. As a judge, I get to see a small fraction of what is entered, so I try to take in as much of the rest as possible when I return as a fairgoer. I take a lot of photos and carry a notebook in case inspiration strikes. Often, Trevor and I see a project that we want to try together. A good example would be the Handprint Campfire that we made during Project CAT.

To wrap up the 2015 fair season, I'm going to share my favorite projects from each of the two fairs I visited. First up is this collection. Can you tell what it is? 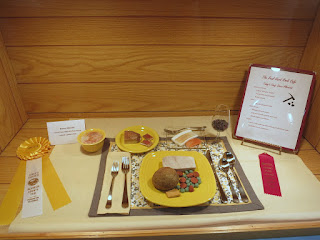 It's a rock collection! I thought this was so incredibly clever. The dinner roll! The butter! The peas and carrots! The wine! It's simply adorable and so creative. Notice that it received a 2nd place and a Judge's Favorite. That baffles people sometimes. How can something be the judge's favorite if something else scored higher? Easily. The scoring is based on strict percentages and something that is more complete, made more perfectly, or (in the case of a collection) more informative will score higher, even if the judge actually prefers something else.

These pigs were my favorite thing at the other fair. Aren't they so cute? And so clever! I'm pretty sure this is the first time I've seen a baby bathtub used as a craft item. Bravo! 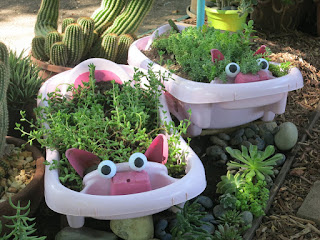 The deRosiers are already looking forward to the 2016 county fair season!
Posted by Cindy deRosier at 5:00 AM