I was optimistic. I love peanuts. Dry-roasted, honey-roasted, made into peanut butter, and even raw (we grew them when I was a kid)- all delicious. I had no reason to believe I wouldn't like Green Boiled Peanuts. Until I opened the can.

Let me interrupt myself by saying that I have visited the South on many occasions and have many wonderful friends with a Southern heritage. For the most part, they have impeccable taste. Or so I thought. If these Green Boiled Peanuts are indeed their favorite snack, I have seriously misjudged them.

When I opened the can, I was overwhelmed by the smell. If you've been to a camp or institution that served overcooked, fat green beans from industrial-sized cans, you know the smell. The taste was similar. The peanuts were mushy, musty, soggy and salty. They weren't inedible, but they were a far cry from what a peanut could (and should) be.

The three of us (my sister-in-law Lisa and friend Kelly) tried the peanuts straight from the can, then heated, following the directions on the can. Lisa had a slight preference for the heated version, while Kelly and I had a slight preference for the room-temperature peanuts. While heat seemed like it would help, it just made the overcooked green bean smell more intense. I gave them a 4, but in retrospect, I think that was too generous. 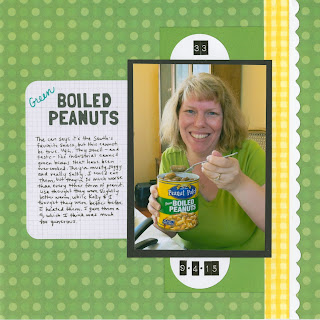 I'm smiling because I hadn't tasted one yet.

Southern friends- what do you have to say for yourselves? Are Green Boiled Peanuts indeed your favorite snack?
Email ThisBlogThis!Share to TwitterShare to FacebookShare to Pinterest
Labels: 43 New-to-Me, Layouts