We took a family trip to Boise, Idaho this summer. My brother-in-law Brian is working there now. My sister and the two kids stayed behind in California near the medical care my nephew needs. When it came time to plan a family vacation, there was no doubt that we'd all travel to Boise to visit Brian.

We spent our days touring the Capitol... 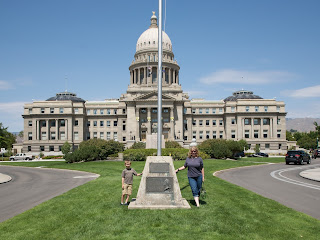 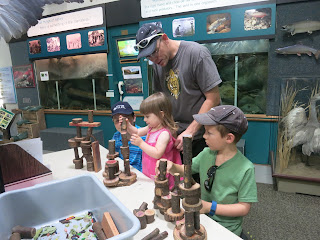 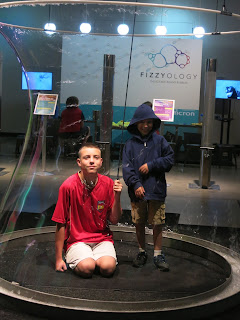 floating down the Boise River ... 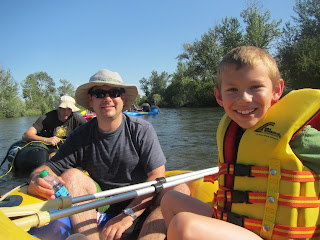 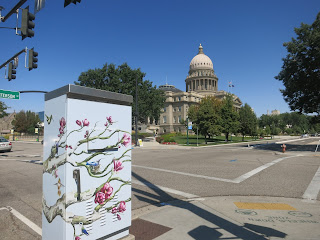 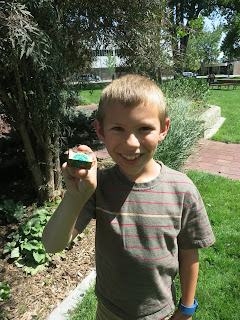 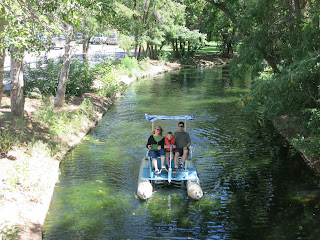 strolling along the river... 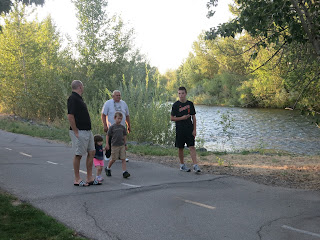 and much more. We also held our annual Family Olympics (2013, 2014). It was a smaller version of what we'd done before, as it was just my parents, my sister's family and our family (8 competitors + 1 young kid) vs. the previous ones that also included my aunt and uncle and two cousins' families (16 competitors + 4 young kids). We also changed up the format a bit. Instead of one couple hosting and not being able to compete, each competitor planned one mental challenge and one physical challenge. We each sat out of our own challenge, but we were able to do the remaining 14 challenges.

We held the majority of our events in the evening in our hotel's breakfast room. It was not ideal, particularly for photos, but we made it work. Here are our 16 events in order: 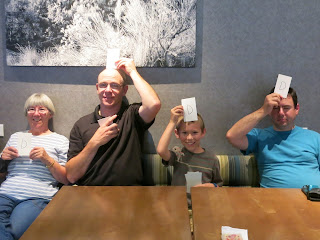 The first event was my mental challenge, Idaho Trivia. I prepared 15 questions with increasing difficulty. I gave each competitor a set of four index cards, labeled A-D. All the competitors sat along one wall so they couldn't see each other's answers. Anyone who got a question wrong was eliminated. I expected everyone to get the first 4 correct, but it turned out that quite a few family members had not noticed that Idaho's state flag is predominantly blue. I'm confident they'll never forget! Brian (the only Idaho resident, pictured 2nd from the left) took the gold medal.

Our second event was my mom's mental challenge, Poker. After teaching Trevor the rules, we played six rounds. The person with the worst hand was eliminated at the end of each round. I was out first, which was a bummer, but otherwise I probably wouldn't have a photo of the game! The gold medal went to my nephew Timothy (blocked by Mom in the photo). 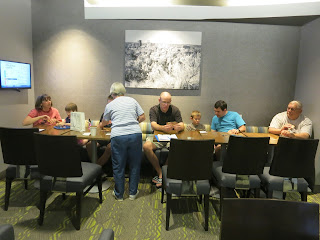 Our third event was my sister Kari's physical challenge. The goal was simple- stack as many foam cylinders as possible. The stack had to stay upright for at least 3 seconds to count and could not have any external support. This was trickier than it might seem, as the cylinders were not all perfectly even. Brian did well (pictured below), but Steve took the gold. 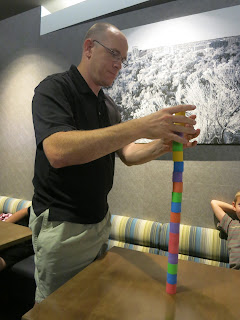 Our fourth event, the first of Day 2, was Trevor's physical challenge. Is anyone surprised that it's bunny-themed? Part of the challenge of designing Family Olympics events was choosing things that could be easily packed. Trevor drew a picture of a rabbit missing its tail, which he rolled up in a cardboard tube for easy transport to Idaho! Each contestant got two cotton balls and had to attempt to land the cotton ball where the bunny's tail should be. It wasn't easy! Steve took the gold in this event as well, his second in a row.

Here you can see Timothy tossing a bunny tail. Part of what I love about this photo is that it looks like Timothy, Brian, Kari and Dad are all wearing the same shirt. I love doing the family matchy thing and they all HATE it, so it always makes me laugh when they are accidentally coordinated. 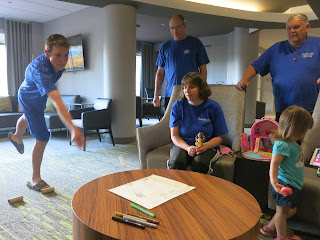 Our fifth event was my Dad's mental challenge. He created a quiz based on the placemat at his favorite Chinese restaurant. We had to list the 12 animals of the Chinese zodiac, as well as what traits each animal represents. It was really hard. I don't have a photo since I used the entire allotted time to try to figure out the answers! Steve won this event too, his third in a row.

Our sixth event was Trevor's mental challenge. He used the maze board Steve built for Trevor's 4-year old maze-themed birthday party and designed a difficult maze. He timed each contestant. Here's my dad, completing the maze. Kari took the gold medal. 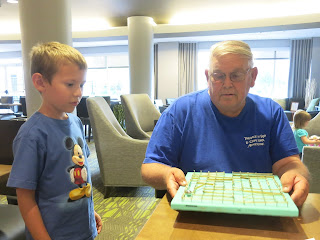 The seventh event was Brian's mental challenge, an oldie-but-goodie from our first Family Olympics. We had a rock-paper-scissors tournament. Here are Steve and Timothy in the semi-finals, though Dad ended up capturing the gold. 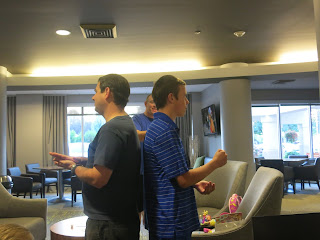 The eighth event was my physical challenge, Paper Building. Each contestant received three sheets of copy paper to use to make the highest tower they possibly could. They couldn't use any sort of tape or adhesive and the structure had to be completely free-standing. Here's Mom, off to a good start, but it was Kari who took the gold with a very impressive tower. 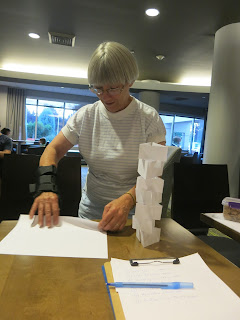 The ninth event was Steve's mental challenge, called Icons. It was inspired by the classic Survivor challenge, where Jeff asks the contestants to memorize increasingly-long strings of objects, then repeat them back successfully. I did really well, but Kari beat me out for the gold. No photo, since I was in it until the very end.

After the second day of events, Kari and Steve were tied with three golds each. Brian had one, Timothy had one, and Dad had one. Mom, Trevor and I didn't have any. However, it's not just first place that earns points toward the overall competition. For each of the 16 events, we were ranked in order and given points corresponding to our position. So it's possible that a person who takes a lot of 2nd and 3rd places could do better overall than someone who wins a few but bombs the rest.

For our third day of competition, we moved to a grassy area behind our hotel. We opened with Mom's physical challenge, the Mystery Ring Toss. We each had three rings to toss onto posts worth different amounts. The trick was that we didn't know what each post was worth, so it was purely a matter of luck if you aimed for a high-point one vs. a low-point one. There was a lot of grumbling from the crowd about this one, but the rules were clear, so we proceeded. Trevor took his first gold of the competition. Here he is watching Uncle Brian check where his rings landed. 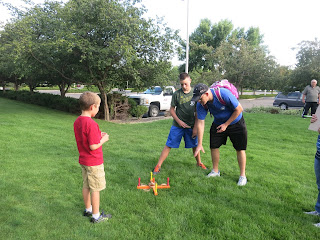 The eleventh challenge was Steve's physical challenge, which he called Egg by Numbers. Before leaving home, he'd filled eight plastic Easter eggs with chipboard digits from 0-8. He hid them in a big area further down from where we'd done the previous event. On go, we had to each search for eggs. The goal was to find the egg with the highest possible number, as the person with #8 would win gold, #7 silver, etc. When we found an egg, we could pick it up and open it, then either keep it or put it back and search for a better egg. The very first egg I found was #8, so I knew I had gold... my first of the competition. Here's Trevor with his egg. 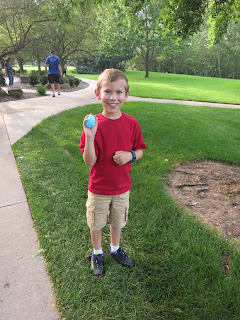 The twelfth competition was Timothy's physical challenge, Bamboo Toss. He cut baton-length segments of bamboo from their backyard and each person had to try to lend the bamboo into a cardboard box. Brian and Dad tied for the gold. Here's Dad with his winning toss. 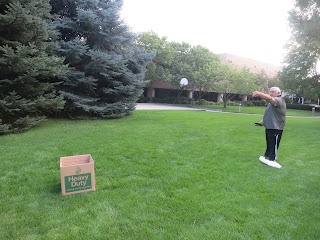 Immediately following Event #12, we flagged down some passing roller-bladers to ask them to take our photo. 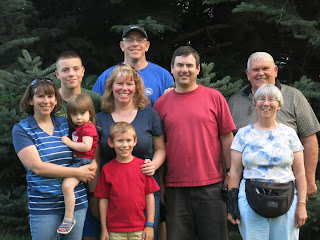 Then we moved indoors for the remaining events.

One of the risks of not having a single host is that, in theory, two people could plan the same event. But what are the odds of that? Must be pretty good, because it happened twice in our Family Olympics. Kari's physical challenge was another egg hunt. It was slightly different, as the eggs contained point values instead of ranked numerals. She hid the highest-value eggs in the hardest spots and put the lowest-value eggs in obvious places. We had 5 minutes to collect three eggs each. We had to decide whether to go for the low-point but easy eggs and have guaranteed points or search for difficult eggs and risk not finding them before 5 minutes were up. I went for the difficult eggs and tied for gold with Dad. No photo of this one.

Brian's physical challenge was somewhat similar to shuffleboard. He taped out zones worth different points on the floor of the breakfast room. Each person rolled three tennis balls and totaled their scores. Mom took her first gold. Here's Steve taking his turn. 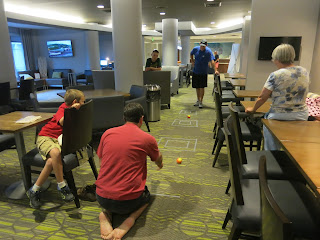 Dad's physical challenge was something he called Ball Drop. The goal was to drop, bounce or otherwise get ping pong balls into small plastic lids. Of course, the balls wanted to bounce right out of the lids. Here's Timothy during his turn. Brian took the gold. 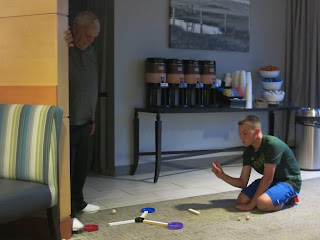 Timothy's mental challenge was a memory game similar to Steve's. No picture of that, since I was competing the whole time. Kari won her fourth gold medal.

After all the competitions, the gold medal count was as follows:

But the number of 2nds and 3rds each person took ended up determining who was on the final medal stand. Drumroll....

Kari took gold and Steve and I tied for silver! (No one took the bronze because of the tie at silver.) 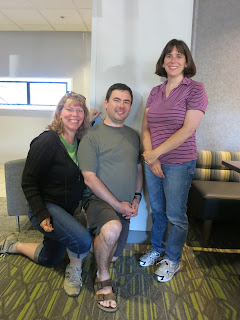 We had a fantastic time in Boise and did so many cool things, but Trevor's absolute favorite thing from the entire trip was Family Olympics. Me too. We're already thinking of plans for next year!
Email ThisBlogThis!Share to TwitterShare to FacebookShare to Pinterest
Labels: Family Olympics