As I mentioned in my post about the knitting loom beanie, my family returned last Wednesday from a 10-day cruise to Alaska. We traveled with the same group as during our Canada adventure: my parents (Dave and Kathy), my sister (Kari), my brother-in-law (Brian), my nephew (Timothy), my niece (Allison) and Brian's godmother (Judy). I offered to host our 4th annual Family Olympics. 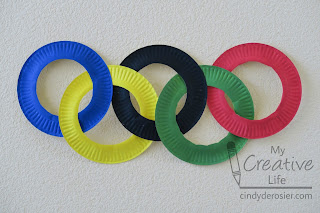 "This intense competition will test the physical and mental acuity of each of you. You will be pushed to your athletic and academic limits. You may want to prepare ahead of time through a series of rigorous calisthenics, calculations and calembour.

All the details will be revealed to you once you are safely aboard the Grand Princess. In the meantime, you may wish to study the attached scorecard that reveals the twelve events that comprise the 2016 version of the Family Olympics.

Best wishes to all. May the odds be ever in your favor."


The events were divided into physical competitions (archery, athletics, basketball, boxing, golf and swimming) and mental competitions (artistic gymnastics, handball, rowing, sailing, taekwondo, and weightlifting). I alternated loosely between the two. I ended up cutting the golf competition, leaving a total of 11 events. I'll share four of them today.

The actual sport of artistic gymnastics involves things like floor exercise, balance beam, and pommel horse, but our version required decoding the artistic interpretations of the symbols used for each sport in the Rio Olympics. Each contestant got this sheet with instructions to identify each of the sports that will take place in Rio. Give it a try - it's harder than you might think.

I gave everyone all day to work on it. They were forbidden from using any outside help, electronics, etc. Some contestants used the strategy of putting the same answer on multiple icons, knowing that one of them would be right. Others filled in the ones they didn't know with wild guesses. Trevor absolutely cracked me up with one of his answers. 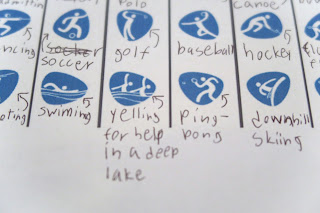 And I didn't see it until later, but he put 'mixed media' down for the pentathlon. Is he the son of a craft blogger, or what?!

Ready to see the answers?

How'd you do? Among our 8 contestants, Steve came in first, Timothy was second and Kari was third.

There will be 47 gold medals in Athletics in Rio - the most of any sport. It includes all the running, jumping and throwing events. For our competition, we did the shot put. We found an empty corner of a lounge and used cotton balls as shot puts. Here's an action shot from what ended up being Brian's winning toss. 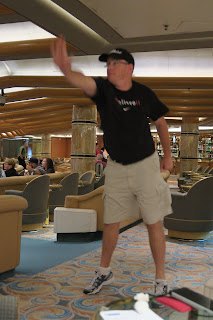 Kari came in second. Steve and my dad tied for third. Yet only about a foot separated first and last place. As it turns out, there's only so far that you can put a cotton ball without resorting to 'creative' methods.

Imagine a mug is a basket and free throws are made with chipboard numbers. Your goals is to toss the numbers 1-8, one at a time, into the mug. I put a piece of masking tape on the floor to indicate the free throw line. The total score is the sum of the numbers that made it into the cup. This would be a score of 18: 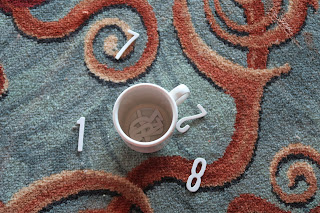 Kari won this event with a perfect score! Second place went to my dad. Timothy came in third.

My goal in creating events for the Family Olympics was to minimize the amount of supplies I'd need to bring from home. For the basketball event, I knew there'd be mugs onboard the ship, so I just packed the chipboard numbers. My plan for the Boxing event was to borrow a Jenga set from the game room and time each person to see how long it would take them boxing up the set properly. I was 100% counting on the fact that every cruise ship I've ever been on (and this was cruise #18 for me) has Jenga onboard.

Well, as it turns out, they DID have a Jenga set onboard... but there were some blocks missing, the plastic guide was gone, and the box was torn. How can you have a boxing event without a box?! With no better option besides literally having my family box against each other, I ended having them do the opposite of boxing. I timed them building the Jenga set properly rather than boxing it up.

My mom won this competition. (The idea of Grandma getting the gold in boxing amused us all.) Second place went to Steve and Kari took third. After the competition was over, Trevor and Allison used the Jenga blocks as dominoes and played for a long time. 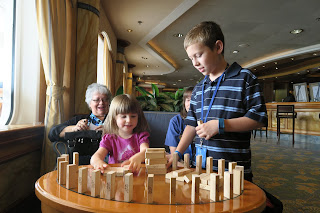 I'll share more from our Family Olympics tomorrow!
Posted by Cindy deRosier at 5:00 AM