Here's the next four events from this year's Family Olympics:


Archery aboard a cruise ship? Sure! Just scale everything down a bit and shoot q-tips instead of arrows. Here's Brian, drawing the bow: 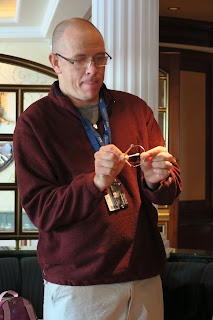 I used masking tape to put a line on the floor, then taped a target to a table. Each contestant shot six arrows. There were points for hitting the target, obviously, as well as points for landing on the tabletop. Here's Timothy, about to shoot: 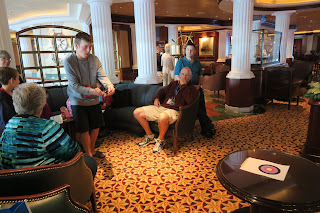 I made the bow at home by straightening a large paperclip, bending it to form an arc, then bending back the ends. 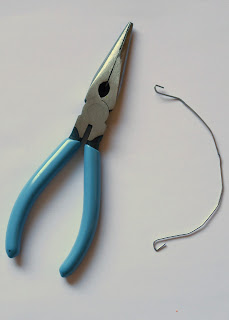 I used scissors to snip one end off each of the q-tips. Then I put a rubber band (the kind that comes on the newspaper) onto the "bow." It took Mom a long time to figure out exactly how to shoot it. 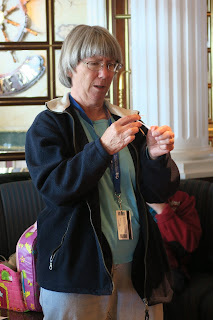 In the end, Steve captured the gold, Brian took silver and my dad and Kari tied for bronze.


My thinking process: "Hmm. Hand. Hand of cards. Ball. Blackball. Handball will be playing a hand of Blackball!"

Blackball, if you're not familiar with it, is one of our family's favorite card games. I just spent 10 minutes looking for rules online to link, but all I could find were people asking for rules. I'll dedicate a separate post to the rules after I've shared the rest of our Family Olympics. (Edit: Rules are here.) 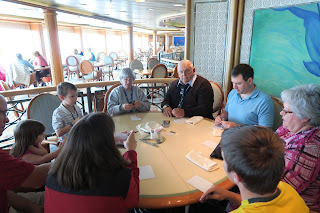 Because it's a long game, we only played the first half then totaled the scores. Timothy took gold, Steve and Kari tied for silver and Brian took bronze.


Since Family Olympics would take place on a cruise, it only seemed right to quiz the contestants about the vessel on which they were sailing. I prepared 10 questions about the Grand Princess, using this handy page. The format was inspired by the outstanding Wits and Wagers.

The answer to each question is a number. After reading the question, each person writes their guess on an index card. Arrange the index cards in numerical order. After seeing what everyone else has written, each person votes on which answer(s) they think are correct. Points are given to those who correctly choose which answer is closest to the actual answer, regardless of what he/she had written on the index card. Anyone who writes the correct answer on their index card gets points also.

Timothy earned his second gold. Steve and Brian tied for silver and Kari took the bronze.

Here's Mom checking her list, baffled that she could have left off so many easy words: 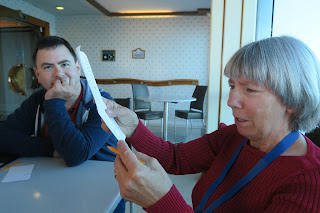 Kari took first place, which wasn't surprising. I was expecting Kari, Mom and Judy to take the top three spots with no problem. Steve (who is terrible with spelling, anagrams, and any sort of word game) shocked us all by coming in second. He spent HOURS, literally writing down every possible combination of letters one by one until he was out of time. Impressive! Judy narrowly beat out Mom for the bronze.