Time for Trevor and me to explore our next state through Little Passports. This time, Michigan. It did not disappoint, as Michigan is quite an interesting state! Trevor started by assembling the 3-D model. 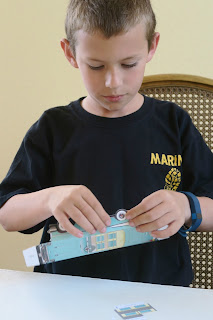 No surprise - it was a classic car. 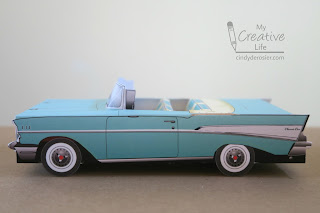 We read all about Henry Ford's invention of the moving assembly line and completed the related activity, putting pictures of trucks in different stages of production in order. We also learned about the life of Henry Ford. He was one of the most important inventors of the 20th century, had a huge influence of the economy of Michigan, and helped earn Detroit the nickname of Motor City.

Ford is not the only one who achieved fame in Michigan. In 1906, two brothers (the Kelloggs) started a little cereal company in Battle Creek that you just might have heard of! In 1959, songwriter Barry Gordy started Motown Records in Detroit, introducing the world to Michael Jackson, Diana Ross and many other talented singers. I love that each Little Passports Journal is packed with so much information.

We enjoyed the choose-your-own-adventure activity about the Great Lakes. Trevor, a huge fan of dot-to-dots, loved solving one to learn how people get around Mackinac Island. We worked together to follow the clues to learn about Michigan's oldest lighthouse, built in 1829. We solved a puzzle based on the National Cherry Festival in Traverse City. The drawing activity had Trevor tracing his hands to make a map of Michigan. It brought back a memory from when I attended a national 4-H conference as a teenager and everyone I met from Michigan identified where they lived by showing me their palms! I've never seen anyone from a different state do that... but it seems to be pretty universal when people from Michigan explain where they live!

Trevor was excited about the Michigan cooking project. 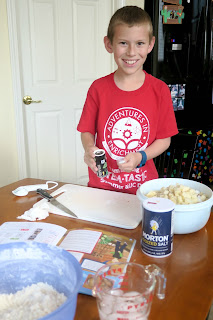 We made pasties, just like the Cornish miners brought with them to Michigan in the 1800's. The recipe calls for rutabagas or turnips, along with ground meat, potatoes and carrots, but Trevor couldn't decide between them. He chose to add rutabagas, turnips AND parsnips. It was a delicious combination and a meal we'll be making again for sure. 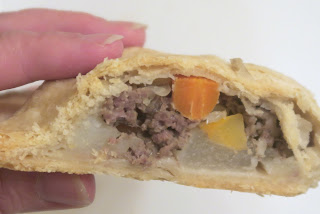 Trevor's godmother, Jonna, joined us to do the Michigan craft. We made origami tulips, inspired by the city of Holland, MI. It is the center of Dutch culture in the US and hosts the Tulip Time Festival each year. 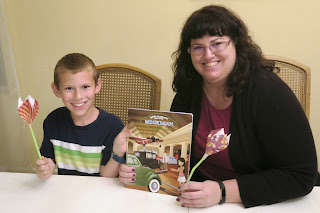 As I'm sure you've noticed, I HIGHLY recommend the Little Passports USA Edition. But if your child is more interested in hands-on science (is there a kid who doesn't like hands-on science?), then you'll definitely want to check out Little Passports' newest subscription, Science Expeditions. It is a kit for kids 9+ that introduces them to the fun and exciting world of science. The monthly packages include a comic book adventure, a mystery to solve, and hands-on science experiments. The materials help kids to build problem-solving skills and are focused on STEM principles.