On to our next virtual state adventure through Little Passports! This time, Trevor and I learned all about Indiana, also known as the Crossroads of America.

Trevor and I learned a lot of other facts about Indiana. This state is famous for its limestone, which has been used to build many important buildings in the US, including the Empire State Building, the Pentagon, and 35 state capitols! We enjoyed working with tangrams to make a bridge and other shapes. I had no idea that Parke County, IN is "The Covered Bridge Capital of the World." I hope to visit someday! We learned that the Circus Capital of the World is also in Indiana, as the small town of Peru was the winter home to the largest circuses of the 1800s.

Ft. Wayne, IN is home to the Johnny Appleseed Festival, so the science experiment in the Indiana State Journal is about browning apples. Trevor followed the directions to cut an apple into three parts. 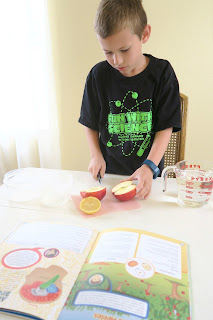 He left one piece of apple on the cutting board, put another in a bowl of lemon juice, and put the third in a bowl of water. After an hour, the one exposed to air had turned the brownest, while the ones in water and lemon juice had retained their color.

We opted to push the experiment further by leaving the apples in place for three days to see what would happen. The results were fascinating. The apple in the lemon juice (center) was the brownest... and it had enlarged significantly! The apple in water (right) was still not brown. It too had soaked up liquid and gotten larger. The apple sitting out had shriveled, but not gotten any browner than it had originally. 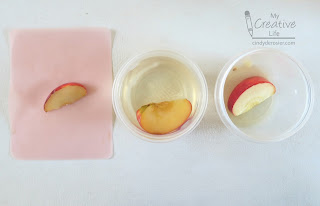 Here they are, in the same order. They all started out the same size! 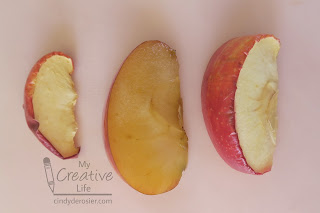 The Indiana cooking project was Breaded Pork Sandwiches. Trevor had never pounded meat thin before, so that was a new skill for him. 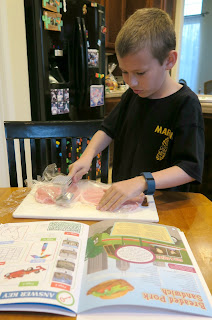 He did a great job with the sandwiches and we all enjoyed a delicious dinner! This is another recipe that's probably going to become a regular around here. 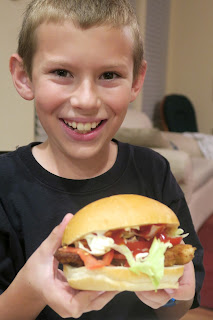 Thanks to Little Passports for another really fun and educational journey. We're both looking forward to the next state!