I love hands-on science and so does Trevor. (And pretty much every other kid, ever.) We've been having great fun conducting science experiments and writing about them for Little Passports. The latest is one about layering sugar water to make a rainbow.

Conducting, photographing, and writing about a science experiment for a company like Little Passports is a different experience than doing the experiment for ourselves. For example, I need to pay attention to what Trevor is wearing or what's in the background of photos in a way that I don't for my own blog. I have to think about their target audience when writing up the steps, in a way that might be different than to publish here. And I need to wrap it all up in a coherent way that summarizes the science behind the activity, removing the personal information that I would add here. It's challenging, but in a good way. I honestly can't think of a better way to earn a living.

But the downside is that my stories don't get told. The article concludes with the rainbow, lined up nice and pretty with the rest of the glasses. But that's not where the science actually ended for us. Trevor continued to mix and test and predict and guess. He swirled and squirted and poured, learning through play. 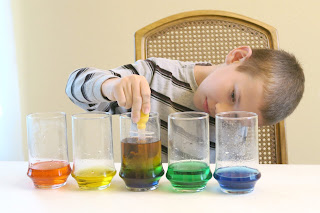 Eventually, he didn't have a rainbow anymore. Instead, he had a dark brown, a dark green, a red-orange and a blue. This inspired a new thought. It's just sugar water - what if we add spices and flavorings to make it taste like the colors Trevor created? 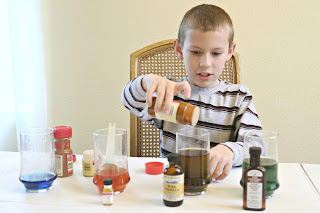 The green looks like mint, so he added mint extract. The brown got vanilla and cloves. He added cinnamon oil to the red-orange, and ground ginger (?) to the blue. 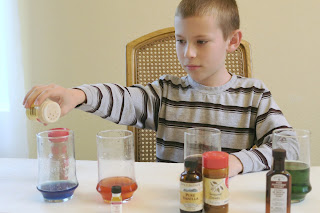 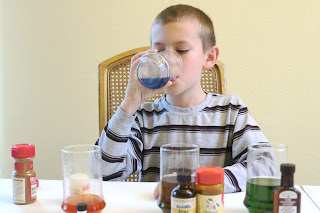 Delicious! And fun and educational, too. Thanks, Little Passports, for inspiring our science explorations!