You're familiar with the nursery rhyme Pease Porridge Hot, I hope? Pease porridge is an English dish that was brought to the US by English colonists. They ate it hot, cold, or even 9 days old... though I think it would have been fairly unusual to have that quantity of leftovers. It is made, not surprisingly, with peas.

As part of our study of Colonial America, I taught Trevor's fifth grade class how to make Pease Porridge (Hot). I told the kids that they could wait and eat it when it was cold, or even nine days old, but they all chose to eat it hot. I've never seen a group of kids wolf down peas faster and I'm surprised how many asked for seconds. Cool. 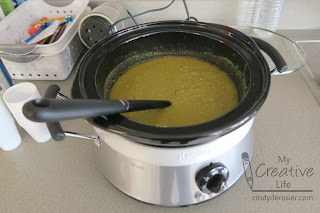 We kept the recipe ridiculously simple, just one package of split peas and 16 oz. of veggie broth in the crockpot on low for 4 hours. You can, of course, add other vegetables or meats. You'd typically start with water and a hambone, but the veggie broth is cheaper and lets kids whose religious beliefs prohibit them from eating pork to try this.

"What do you think of the pease porridge hot?" 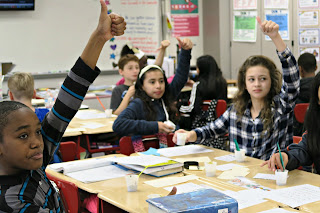 Pretty much thumbs up throughout the room!
Email ThisBlogThis!Share to TwitterShare to FacebookShare to Pinterest
Labels: Hands-on History, Recipes