Trevor is enjoying his last few weeks of Cub Scouts before bridging to Boy Scouts in March. We've visited four local Boy Scout troops so far in hopes that Trevor will find his perfect fit. One troop has risen above the rest, but his decision isn't final yet. Soon, though! Because of this upcoming transition, it has been a year of 'lasts' for Trevor. Here's his last Pinewood Derby car: 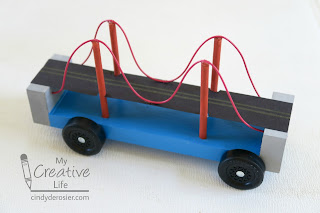 As usual, Trevor came up with the design, sketched it, and did the cutting in Grandpa's wood shop. He brought the pieces home to paint and assemble.


After donning eye protection, Trevor turned the block of wood that would be his car on its side, then used the scroll saw to cut a rectangular portion out. He used the drill press to drill four holes and cut dowels to length to fit in the holes.

He painted the middle portion of the car blue, then let that dry. 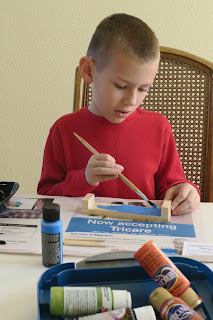 He painted the dowels an orangey-red. 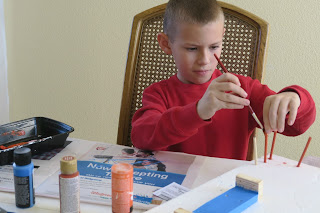 At this point, he headed out to the garage with Steve to put the wheels on the car.

Then he painted the ends of the car grey. He used craft glue to put the dowels in place. Then he cut a rectangle of black cardstock and used a yellow paint pen to draw lines down the center. He marked where the road would touch each dowel, then used the hole punch to remove a portion of the road so it would fit around the dowel. He glued the road in place. The final step was cutting the wires and gluing them in place. He used E-6000 and it held well throughout his races. 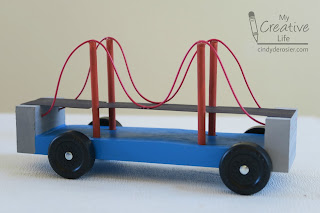 So how did his car do in the races? Well... Trevor knew going in that his design would be slow and it was. Fortunately, it looked so cool that it made up for its poor performance. That's a bit of a tradition for Trevor - awesome design, so-so speed. You can see all of Trevor's previous awesome designs, including an eraser, a spaceship, a dragon and a mouse here. That same link has my past cars, as well as Steve's and one made by my nephew, Timothy.