After exploring the outstanding Living History Farms, we continued our exploration of Des Moines with a visit to the Iowa State Capitol. We've visited around a dozen state capitol buildings and love seeing the similarities and differences between them. We started by exploring the grounds. We found a miniature Statue of Liberty statue erected by local Boy Scouts, as well as the Liberty Bell replica. 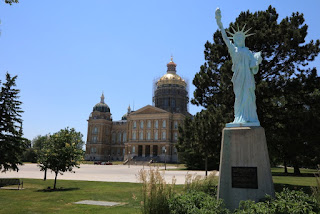 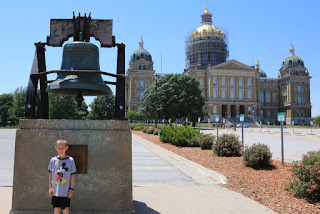 The Statue of Liberty is unique to Des Moines, but all 50 states (and US territories) have Liberty Bell replicas that date to 1950. We've found them on display both inside and outside the various capitol buildings we've visited.

We'd planned to do a self-guided tour at the Capitol, but a free guided tour was starting right as we got there, so we joined it. That turned out to be a very good decision, as there were multiple locations in the Capitol you can't visit without a guide. Here's the inside of the dome from the bottom floor, which is publicly accessible, compared with the same dome after climbing a couple hundred steps up a narrow circular staircase, accompanied by a guide. 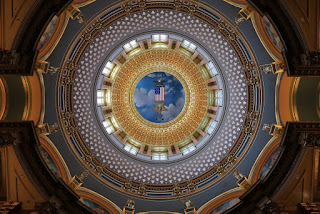 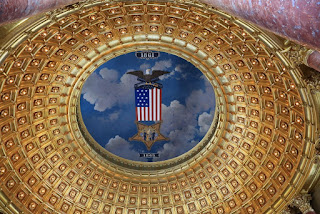 Here's what it looks like when you're ready to head back down that same staircase. And speaking of staircases, that's Trevor standing beneath the US and Iowa flags with the Grand Staircase behind him. 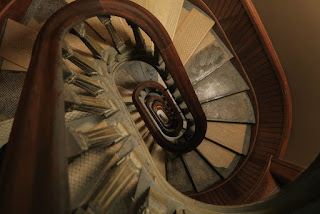 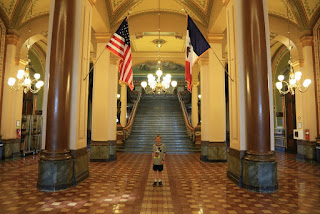 We thoroughly enjoyed our tour of the Capitol. From there, we crossed the street to the excellent State Historical Museum of Iowa. This museum is free and filled with lots of neat exhibits about the history of Iowa. In these photos, Trevor is attempting to drill into rock and to plow the land. 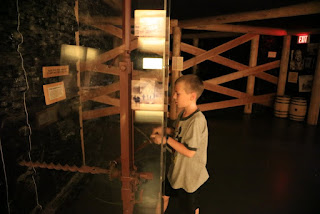 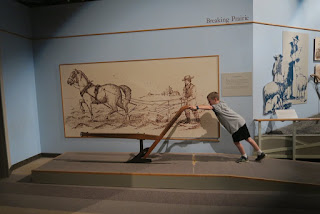 It's not all about technology; I enjoyed seeing the marionettes from The Sound of Music. The artist was from Iowa. 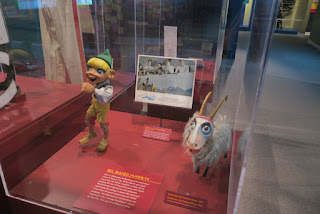 I really wanted to tour the Better Homes and Gardens test garden, but we weren't in Des Moines on the correct day of the week (Fri). So we settled for photographing their giant trowel and oversized golf ball sculptures outside the headquarters. 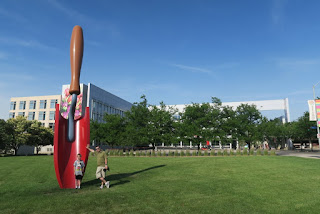 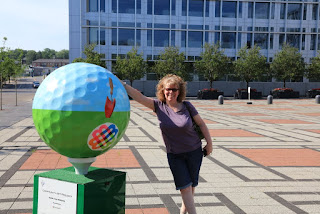 We'd been asking people where to eat in Des Moines. We got a lot of suggestions, but the one place that literally every single person mentioned was Zombie Burger and Shake Lab. It did not disappoint. Not only was the food outstanding, but I took two photos that are among my very favorites from the whole trip: 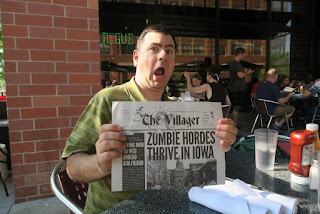 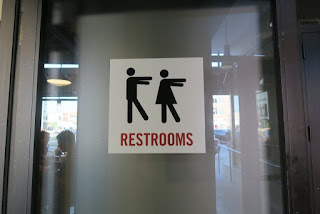 That's the menu that Steve is holding.

Zombie Burger is famous for their shakes as well as their burgers. We ordered a rhubarb pie shake (because RHUBARB!) and a peach shake, then struggled to decide which burgers to try. After much debate, we chose two to share amongst the three of us. 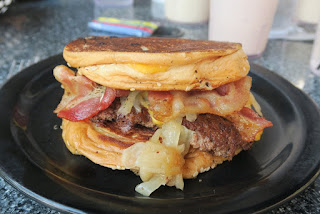 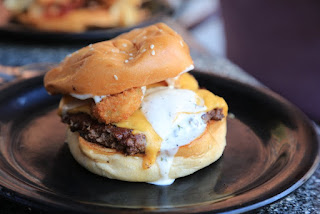 Both were outstanding. It turns out that using grilled cheese sandwiches instead of a bun is an excellent idea. We almost chose THE WALKING CHED (breaded + deep fried macaroni + cheese bun, bacon, Cheddar cheese, caramelized + red onion, macaroni + cheese, mayo) because a bun made of mac and cheese sounds awesome, but we guessed (correctly) that two burgers, fries, and two shakes would be the right amount of food for the three of us. We didn't have a way to deal with leftovers and I am rabidly against food waste.

After our very full day exploring Des Moines, we headed back to the hotel and collapsed into bed so we'd be ready for the next day's adventures. In the morning, we checked out of our hotel and drove west back toward Omaha. It was really nice to be able to see the landscape and surroundings that had been too dark to view during our drive east.

We stopped in Council Bluffs, located on the Iowa side of the Missouri River, just across from Omaha, to visit the Western Historic Trails Center. We watched a very interesting video and then explored the exhibits. I loved the dimensional metal artwork that accompanied each display. 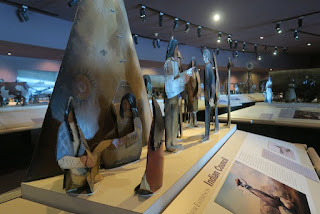 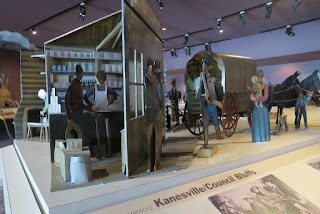 Obviously, a place dedicated to western trails is going to have some trails. We strolled along the Iowa Riverfront trail. Some of the trees and wildflowers were familiar to us, but many weren't. 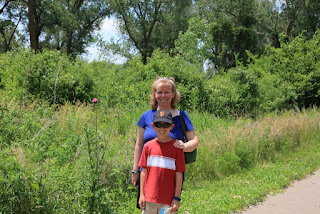 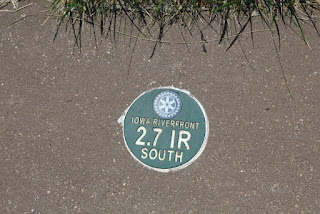 At this point, we said goodbye to Iowa, drove two minutes across the Missouri River, and started our adventure in Nebraska.
Email ThisBlogThis!Share to TwitterShare to FacebookShare to Pinterest
Labels: US Travel