The deRosiers are huge fans of Perler beads, but there are definitely some drawbacks to creating art that needs to be set with an iron. When I first heard about Qixels, I was eager to give them a try. Basically, they are similar to the various brands of fusible beads, but instead of melting them together using heat, these fuse with water. I bought this set for Trevor to try. 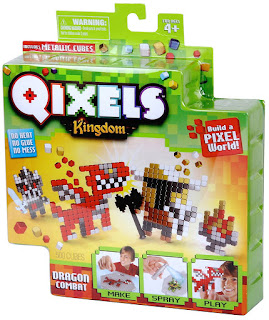 The set comes with everything you need to make four characters. 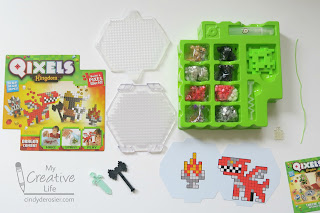 The beads are about the same size as Perler beads, but they are square and closed on one end. 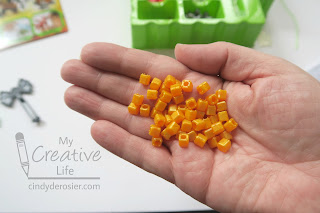 To make a design, you slide a pattern under the design board, then simply match the beads to the colors. The beads fit very snugly in the board. You're not going to accidentally bump and mess up the design, which can be an issue with Perler beads. 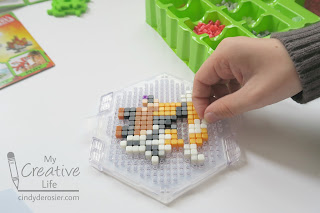 The best thing about Qixels as compared to Perler beads is that they are set with water instead of heat. Trevor started doing Perler beads at age 2; it took years before he was capable to use the iron to heat-set his own projects. With Qixels, you just spritz the design with water. 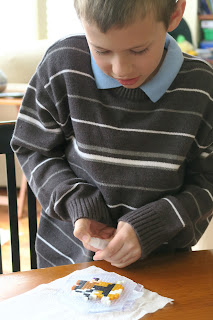 The flip side about the water-set vs. heat-set is that the Qixels need to dry before they are set. While it takes just minutes for Perler beads to cool down enough to play with them, you can't play with completed Qixels until the next day. But Trevor doesn't play with the things he builds, so it doesn't matter to him that Qixels have a longer drying time.

He really liked the Minecraft-inspired pixelated look of the finished characters. 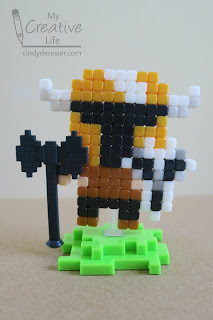 All things considered, we give Qixels two thumbs up. I don't see them as a replacement for Perler beads, but rather as a supplement to create a different style of artwork.

What do you think? Have you tried both? What is your preference?
Email ThisBlogThis!Share to TwitterShare to FacebookShare to Pinterest
Labels: Crafts for Kids, Product Review