Before our trip to Iowa and Nebraska, we had the following conversation a bazillion times with friends, random acquaintances, the dentist, etc:

Them: Doing anything special this summer?
Us: Yes! We're spending a week in Iowa and Nebraska!
Them: Oh, you must have family there!
Us: Actually, no.
Them: Then why would you go there?

The craziest thing is that it didn't stop happening after we'd arrived in Iowa or Nebraska. At the airport, museums, restaurants, and everywhere else, someone would ask where we were visiting from. As soon as we said, "California," they immediately responded with, "You must have family here!"

I can (sort of) understand why it kept happening. Iowa and Nebraska don't have reputations as major tourist destinations. People from the Midwest are far more likely to vacation in California than the other way around. But I am here to tell you that anyone who doesn't vacation there is missing out! We visited amazing museums, ate spectacular food, learned a ton, and met some of the friendliest people ever.

On Trevor's last day of school, we grabbed him and zipped to the airport for our non-stop flight from San Francisco to Omaha. We rented a car and drove two hours east to Des Moines, where we checked into the Embassy Suites Downtown Des Moines after midnight. We woke up to a beautiful river view. 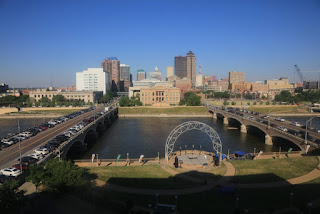 We had two main priorities for our time in Des Moines. We wanted to see the Capitol and we wanted to go to Living History Farms. I'm a huge fan of anything involving living history. (You may recall the Civil War Living History Program I did with my students on Angel Island years ago.) 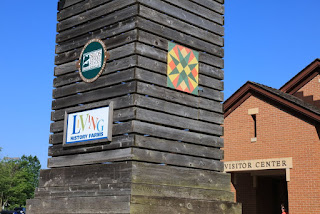 I received free tickets to Living History Farms, but let me assure you that I would pay full price for tickets in a heartbeat. If I were local, I'd get a membership.

There are basically two sections to Living History Farms. The first has farms set up as they would have been at different points throughout history. There is a 1700 Ioway native farm, an 1850 pioneer farm, and a 1900 horse-powered farm. There are people in period costume working the land, preparing food, chopping wood, and doing all the other chores for the farm. It is absolutely fascinating to walk from one farm to the next and see the jumps in technology and standard of living, touch the items they used, and immerse yourself in the era. 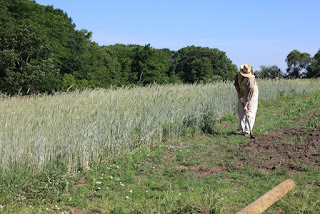 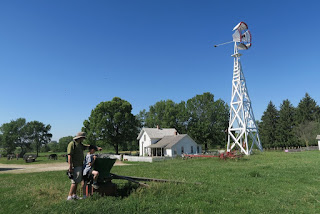 The second part of Living History Farms is the 1875 town of Walnut Grove. This town is just as it would have been in 1875. And it too is completely hands-on. Trevor served as an apprentice to the blacksmith, working the bellows. 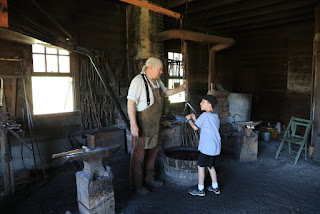 Unfortunately, Trevor's career in blacksmithing was short-lived, as he was not able to pass the simple test of holding the tool up with a straight arm. From the age of 3, children in Walnut Grove would have carried buckets of water from the well with their arms straight out to avoid spilling; when you do that every day, you'd have no problem passing this test by the time you were ready to apprentice. 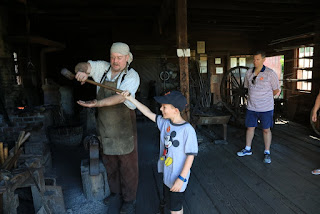 Trevor had better luck with the druggist. He correctly identified the leaches in the jar and knew how they were used. 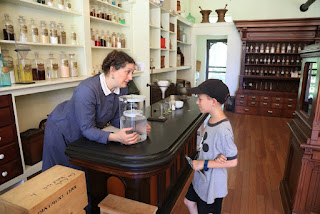 He was a competent assistance when it was time to make lavender toilet water. 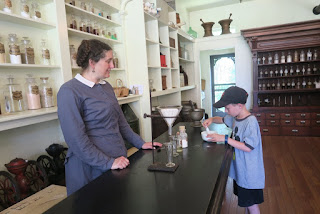 At the printer's office, Trevor did an OK job spotting the errors in the hand-set type, but not enough for this to be a good calling for him. Besides, he hates ink on his hands. 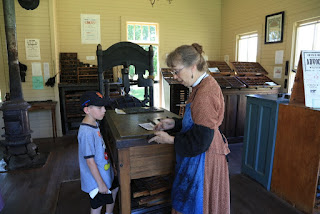 Trevor might have enjoyed working in the general store. He's good with math and liked the variety of the work. Plus, there was candy. 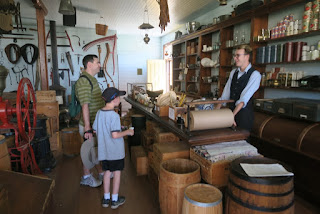 We visited the bank, the lawyer's office, the milliner, and the broom maker. We went into the church and looked around the cemetery. Ultimately, Trevor found the place he would be most comfortable if he were an 1875 child. 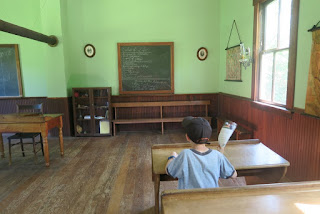 He thought the desks were cozy and the inkwells interesting. It would take a little getting used to standing to recite. 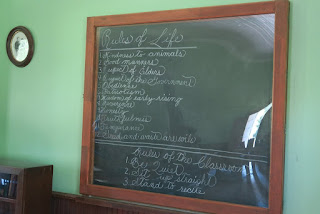 Living History Farms also does something neat that I haven't seen elsewhere. When you arrive, you're given one of three stickers - member, 1st time visitor, or returning visitor. Our orange stickers let all the employees know that we'd never seen any of it before and to jump right in with the full experience. It was such a nice change from the usual, "Have you visited us before?" question over and over at similar types of museums. 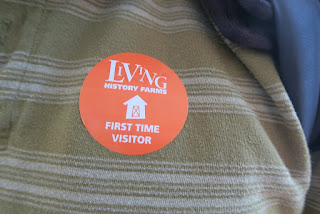 We didn't eat at Living History Farms (other than buying sassafras candy at the general store), but they do have a cafe and snack shop. Another feature we did not use was their "Steer Your Step Visit Guides" guides. They'd be perfect for a return visit.

Obviously, I highly recommend a visit to Living History Farms! Tomorrow I'll share the rest of our Iowa adventure. (Spoiler alert: Iowa is awesome.)
Posted by Cindy deRosier at 5:00 AM