The next state we visited virtually through Little Passports was Alabama. We learned so much about the Yellowhammer State, beginning with what a yellowhammer is! (It's a type of woodpecker, and is Alabama's state bird... although apparently its 'correct' name is northern flicker.) The first thing Trevor did was build the model. If you look closely, you can see a yellowhammer on the branch. 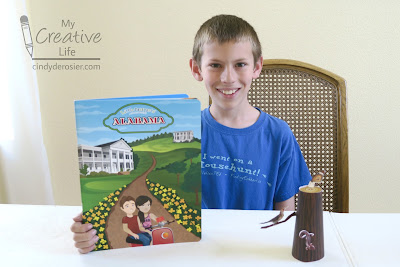 We worked together on a challenging hidden picture puzzle about jubilees, the unexpected gathering of sea creatures close to the surface of the water along Alabama's Gulf Coast. I've never heard of this before and was eager to learn more. It turns out a jubilee happens when oxygen levels in the water are low. The animals swim close to the surface where oxygen levels are higher. Unfortunately for them, people fish them out with their bare hands!

We learned that Alabama is famous for its humidity, with moist and hot summers, cool winters, and two tornado seasons (spring and winter). Trevor did an experiment to learn how the warm water along Alabama's Gulf Coast creates clouds. To try this experiment yourself, put warm water in a glass jar. Drop a lit match into the jar and immediately cover the top with the bag of ice. 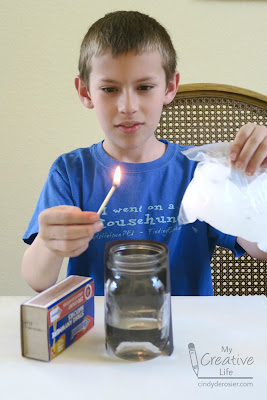 A cloud of water vapor will form. Remove the bag and the cloud rises out of the jar! 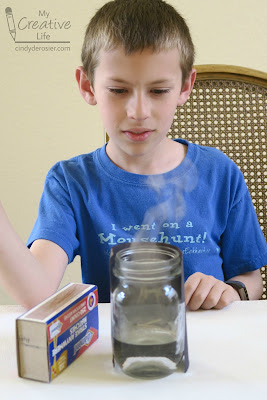 Next, we did an activity about Alabama's role in the Civil Rights Movement of the 1960's. It was inspired by the Wall of Tolerance in the Civil Rights Memorial in Montgomery, which sounds like a must-visit when we eventually make it to Alabama. Trevor and I brainstormed a big list of things he and I can do to make the world a better place and added our names to the Wall.

We worked together on an activity about the Alabama natives, well-known for their pottery, river cane baskets, and wood carvings. Then we did a map activity about the Heart of Dixie. It was easy for Trevor, but my 46-year old eyes had some trouble distinguishing between very close colors in small print. Sigh. Getting older can be frustrating, but as they say, it beats the alternative.

We solved logic puzzles about Space Camp at the US Space and Rocket Center in Huntsville. Then we used musical notes to reveal four genres of music important in Alabama's history. We looked at Alabama's timeline and read about famous events that happened in Alabama. Trevor solved a maze about Alabama's waterways.

Finally, we did the cooking activity. 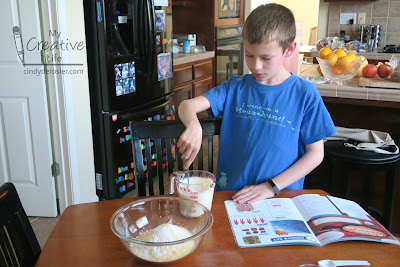 We made Alabama cornbread in a cast iron skillet. It was tasty, but (hide your eyes, Southerners) we prefer our cornbread with sugar. And wheat flour. 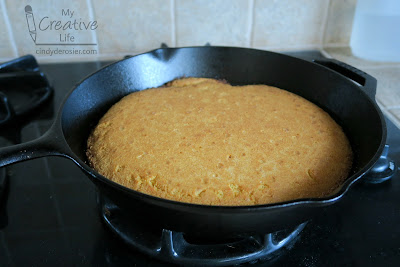 Trevor and I had a great time visiting Alabama through Little Passports and look forward to the day we'll explore the state in person!