While I don't celebrate Dia de los Muertos, I love the meaning and the beauty of the holiday. In my never-ending quest to better understand others' traditions, I've been doing more research into Dia de los Muertos and its rich history. I learned there are seven main colors:

I used those seven colors to make a collage, using construction paper, scissors, and punches. 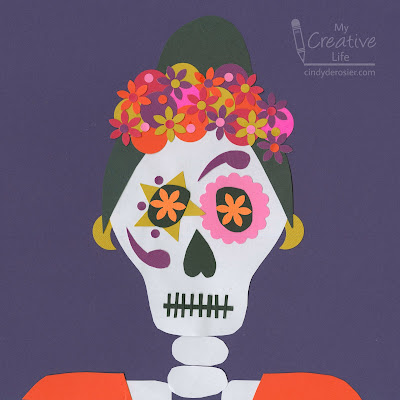 I started by cutting a basic skull, vertebrae, and clavicles from white construction paper, then cut the eye sockets, nose, mouth, and hair from black paper. I punched out a bunch of circles and flowers in different sizes, and cut a few other shapes by hand. Then I just started layering and gluing until I was happy with the end result. It was really fun to just let myself play.
Speaking of playing, PicMonkey (affiliate link) has a neat feature that lets you apply virtual make-up to yourself for Dia de los Muertos, so I gave it a try. I'm not a fan of real make-up, but it was fun applying it digitally. 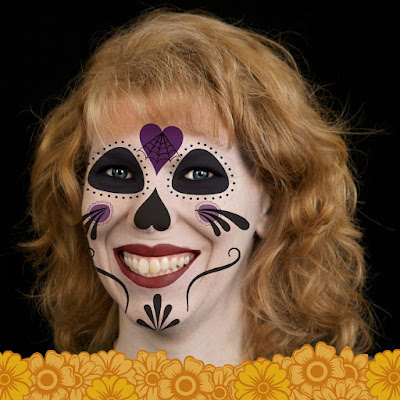 I also recently learned about Pan de Muerto (Bread of the Dead) and plan to make some on November 2. Having never tasted it before, I'm not sure what recipe to follow, so if you celebrate Dia de los Muertos and can steer me in the right direction, I'd appreciate it. Otherwise, I'm just going to pick a recipe that looks promising and hope for the best!
Email ThisBlogThis!Share to TwitterShare to FacebookShare to Pinterest
Labels: construction paper, Crafts for Kids, Dia de los Muertos