Remember last week when I said that Nomids was our new favorite board game? We still love it, but now it has some major competition with Martian Chess for the title! Both were provided to me as media samples. Affiliate links here and throughout the post. 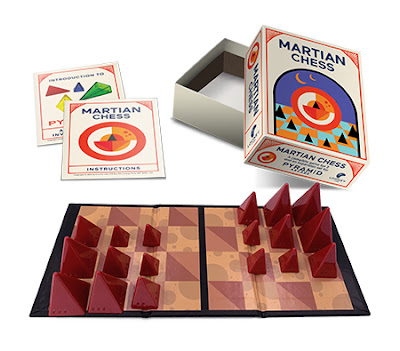 Both Nomids and Martian Chess are from one of my all-time favorite game companies, Looney Labs. Both use pyramids as game pieces, are easy to learn, and are super travel-friendly. While Nomids is a strategy game with a luck component, Martian Chess is pure strategy. So when Trevor beat me the first 8 times we played, I had nothing to blame but myself. I did beat him on Game #9 though!
Martian Chess is simple in concept: There are three types of pieces, each with a certain way they can move (just like in regular chess). The largest pyramids, called Queens, can move any distance in any one direction. The medium pieces, called Drones, can move one or two spaces horizontally or vertically. The smallest, Pawns, can move one space diagonally. Unlike in regular chess, only the pieces on your side of the center dividing line (canal) are yours. Here, Steve is about to move a Drone across the canal. He's not in position to capture anything. Once he moves the Drone, it will become Trevor's. 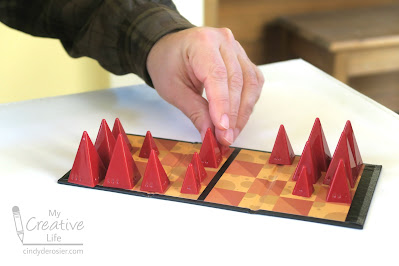 Since all the pieces are the same color and ownership of any one piece is constantly changing, the goal is not to be the last with your piece(s) on the board. Instead, the winner is whoever earns the most points by capturing Queens (3 pts), Drones (2 pts), and Pawns (1 pt). The game goes pretty quickly and really keeps you thinking!
Trevor has already decided he'll be bringing Martian Chess along on Scout trips once we've beaten this pandemic. The boys in his troop love regular chess and are huge fans of other Looney Labs games (particularly Fluxx) so it's a no-brainer that they'll love this too.
Posted by Cindy deRosier at 5:00 AM