Trevor at the Gate

I got a new computer about a week ago and it's taken quite a bit of time to get things set up the way I like. I still have the same high-end large-format scanner (affiliate link here and below) as before, but I'm struggling trying to get the settings just right. It was perfect before, so it's just a matter of tinkering. I'm not fully happy with how this layout scanned, but I did the best I could to fix that in PicMonkey. I absolutely love the layout itself and didn't want to wait any longer before showing it off. 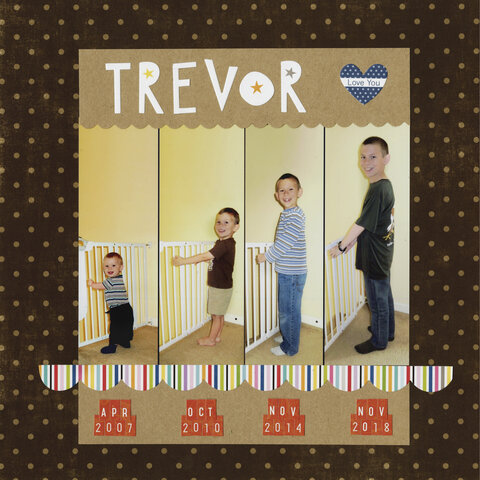 Trevor at the Gate

I did a now-and-then layout with those first two photos back in 2010, but I like this version with the two later photos added so much more. The main reason is because I made the effort to properly scale and collage the photos so that the gate stayed consistent and Trevor's growth is highlighted. I didn't know how to do that back in 2010, so I solved the problem by offsetting the photos so that it wasn't as obvious.

Incidentally, I didn't look back at the 2010 layout until I scanned the 2020 version. While there are plenty of differences between the two, they both feature a dotted background and a colorful border of vertical stripes! It's a very Cindy combination.
Posted by Cindy deRosier at 5:00 AM