Trevor is coming up on his 4th anniversary as a member of Scout Troop 482. Three cohorts of Cub Scouts have bridged to the troop since Trevor did, making him one of our more senior Scouts. I came across the photos of Trevor bridging from Cub Scouts recently (he's SO tiny!) and realized that four of the five Scouts who welcomed him to 482 have since aged out. They helped Trevor develop his skills and served as excellent role models. Now it's Trevor's turn to do the same for the Scouts coming up behind him.
I was helping Trevor brainstorm fun activities for a session he's leading during a virtual open house. I  offered to make him a visual aid because I'll take any excuse to play with PicMonkey. We brainstormed ideas for a Scout-themed license plate. I put the web address where the state name usually goes, then the Scout motto (Be Prepared) at the bottom. You probably recognize the BSA's fleur-de-lis emblem. Do you know why I chose those letters and numbers for a Scouting-themed license plate? 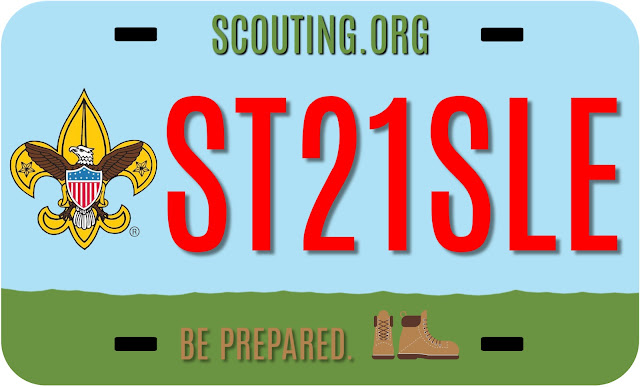 If not, here's a clue. What is the highest rank in Scouting?
Did you say Eagle? Good job! The E in the seventh position on the license plate stands for Eagle. Can you figure out what the other letters and numbers mean?
They represent the seven ranks, in order: Scout, Tenderfoot, Second Class, First Class, Star, Life, and Eagle: ST21SLE. I wonder if anyone has ever gotten this as a personalized license plate. It'd be an awesome choice and one that would probably stump a lot of people!

Posted by Cindy deRosier at 5:00 AM
Email ThisBlogThis!Share to TwitterShare to FacebookShare to Pinterest
Labels: Boy Scouts, PicMonkey