During the month of February, I'm participating in a fun scrapbook competition/event called Bash Bowl. It's hosted by Bash Your Scrapbook Stash, with the goal to use up supplies and make pages. We were randomly divided into two teams (just like the Super Bowl) and the game has a football theme. I'm a proud member of Twisted Scissors.
Each Wednesday night, we attend a Facebook Live session where they spin a wheel to determine the week's elements (aka, the playbook). Then we have until Sunday to make as many layouts as we want following the playbook. Each layout is worth up to six points (a touchdown), with one point for completing a layout then more points depending on which elements we use. The process repeats for a total of four weeks.
The wheel was not kind to me during Game 1. As a simple scrapper who loathes lumpy elements in albums, I knew going in that some things just wouldn't work for me. And that's ok. 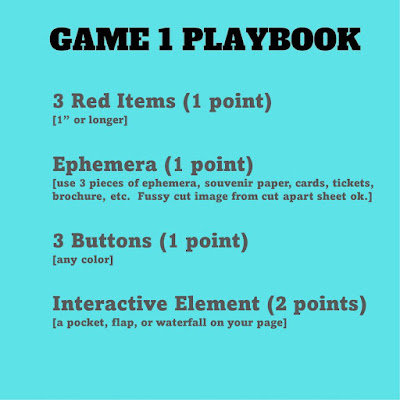 I don't use a lot of red, but I don't mind it. They clarified that purchased die-cuts count as ephemera, so thank goodness for that. Buttons? They said no paper buttons, so that's a hard pass for me. I prefer not to use interactive elements on my pages since they're in page protectors, so I figured any layouts I made would probably earn just three points for Twisted Scissors.
Here is the first 3-point page I made: 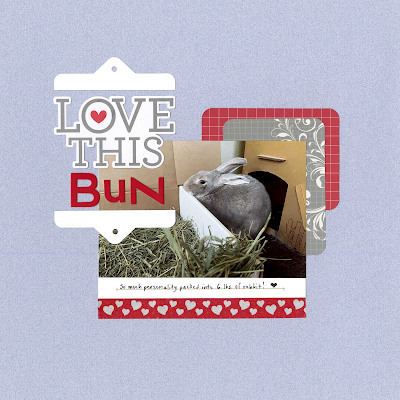 Love this Bun (affiliate link)
There was one more challenging component to the game, which is that you must post a before photo of your supplies in order for the points to count. I pick out materials as I go (see: aphantasia), so to figure them out ahead of time was difficult. Fortunately, nothing says you have to use everything in your before pic, so I put way more items than I ended up using in the pile. 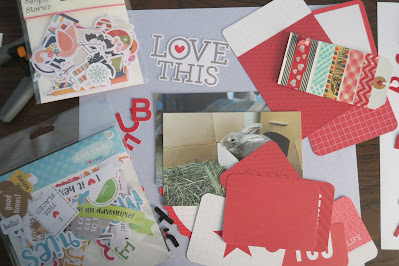 Tomorrow I'll show you the second of two layouts I made for Game 1, along with the final point totals.
Email ThisBlogThis!Share to TwitterShare to FacebookShare to Pinterest
Labels: Layouts, Rabbits, Trouble