As you know, I am a rabid Fiskateer. At the beginning of March, we Fiskateers were challenged to throw a party to celebrate National Craft Month. The party needed to have a theme, there had to be at least 5 guests, and there had to be crafting. The best party, as judged by three photos, would win fabulous prizes. I LOVE theme parties and used to host a lot of them, but haven't since Trevor was born. The Fiskateer challenge was just the motivation I needed!

I checked the calendar- the best date was only 10 days later. Not much time to throw together a winning party, but I was determined to make it work. After much debate, I decided on a theme- 50's Soda Shoppe. I own a poodle skirt and saddle shoes from my days as a ballroom dancer and I figured my friends could wear capris, sweater sets, and ponytails and totally fit the theme. Food was easy- ice cream sundaes and root beer floats.  I bought some 1950's candy and gum as well. 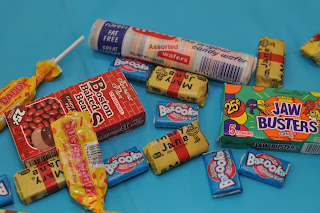 Growing up, I attended several weddings with my parents, and my mom never failed to express her shock at the extravagant meals at the various receptions. At her wedding in 1970, they served nuts and mints. She claims that in the 50's and 60's (and apparently 1970 as well), no one served food at weddings. To be a good hostess, you just put out nuts and mints. The same was true for parties. I'm not sure if she's correct, but I didn't want to risk being a bad 1950's hostess, so I served nuts and mints. 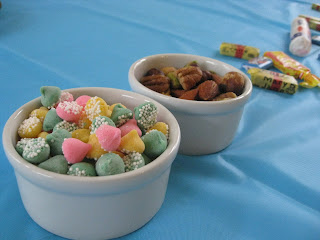 For decorations, I dug out a hula hoop, some fuzzy dice, and an extra pair of saddle shoes (of course I own two pairs of saddle shoes!), then raided my parents' record collection. I decided on the typical black/pink/turquoise 50's color scheme, with some Fiskars orange thrown in!

I have fabulous friends, who in turn have fabulous husbands who babysat the kids so we could have this party. One husband went above and beyond.  Carl Sciortino is an amazing artist who creates custom railings and other metal work. In his spare time, he "whipped up" a jukebox facade for my party. I hid my CD player behind it and the effect was awesome. 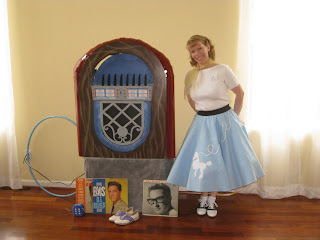 The most difficult part was selecting what crafts to do during the party. There were 8 of us- some are crafters, some are scrapbookers, and one claims to have no crafting ability at all. (Hi Courteney!)  I wanted the crafts to not only fit the theme, but be easy enough for everyone but not boring for anyone. And because my husband had been laid off and I'm a stay-at-home mom, I was determined not to spend any money on craft supplies. A tall order!

Fortunately, I have a well-stocked craft room. Our first craft was rhinestone monogram "pins" for our sweaters. Next we made carnations using kleenex, which apparently everyone did in the 50's. For our final craft, we made roses using toilet paper, which my mom says they made to decorate for school parties. The crafts all fit the theme, were fun, were easy (except the rose!) and I didn't spend a penny on craft supplies, so mission (mostly) accomplished! 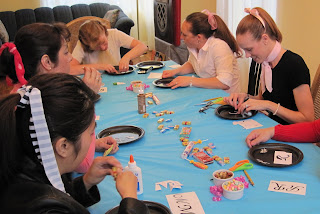 Here's the whole group showing off our rhinestone monograms and carnations! 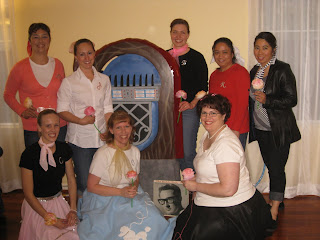 After all the crafting was done, we broke out the hula hoops. I could still keep the hoop up for a long time, but I'm sad to say that I was sore the next day! 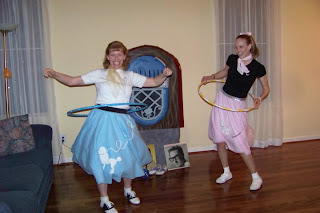 My National Craft Month party was a great success. My guests and I all had lots of fun, which was my ultimate goal. But better still, my party won the contest! Thanks to Fiskars for the inspiration and the prizes. Celebrating National Craft Month with a party is definitely going to be an annual tradition for me!
Posted by Cindy deRosier at 6:00 AM